Deb Baker on Sled Racing, Book Promotion, and Why She Doesn't Dance with Her Husband 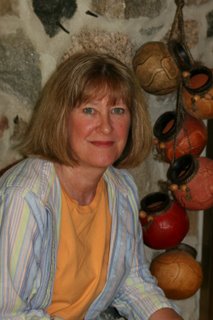 Hi, Deb! Thanks for chatting with me. Your website says that you grew up in Escanaba, Michigan, and that “growing up with the Swedes and Finns who settled in the area gave me a unique perspective on their strange and mysterious ways.” What’s so strange and mysterious about Swedes and Finns? And don’t The Swedes and The Finns sound like rival street gangs?
Yes, they are rival gangs. Scandinavians really dominate the cultural flavor of the Upper Peninsula. Every household has a pot of coffee going all day in case visitors stop by. No one calls ahead or waits for an invitation. They grow rutabagas the size of watermelons and have pastie contests to see which are the best. Saunas are the center of their social lives and always the hit of any party. Everyone goes in naked, of course. All the women go first, then the men. I’m sure there’s a lot of peeking going on, especially in the winter when they rush out of the balmy sauna and start rolling in the snow. To find out more about their mysterious ways, you’ll have to read Murder Passes the Buck.

Your life sounds very interesting and exciting. You have raced sled dogs, and you use your experience in your mystery, Murder Passes the Buck. How did you end up racing sled dogs?
I was fascinated with the sport. I read about the races and followed every Iditarod. One day I had an opportunity to buy two racing dogs. Once the real mushers found out they could unload their worst dogs on me, I had plenty of offers and bought two more. After that, I was hooked. My four dogs would follow a straight path as long as they didn’t see anything of interest, like wildlife. A squirrel would be an excellent excuse to leave the trail and drag me through brush and wire fences (electrified, of course) until they had treed the thing. Every run was a new adventure.

Sounds like my dog. :) You have another mystery series, the Gretchen Birch doll collecting series. When I look at the dolls on your website for too long I’m reminded of those Twilight Zone episodes (and there were several of them) where dolls come alive. Does that ever happen in the Gretchen Birch books?
I keep the dolls and the story grounded in reality as much as possible, although the dolls fight it. That way my editor stays happy. No Chuckys. Several people have thought the French fashion doll on the cover of Dolled Up For Murder is pretty scary.

You’ve spent time in very cold places, but you also lived in Scottsdale, Arizona. Which weather do you prefer?
I love them both. Ideally, I’d spent the really cold months in Scottsdale and the hot ones in Michigan, but I’m never that lucky. I’m usually in Scottsdale in July and Michigan in January. When I moved to Arizona, we arrived the second week in July. It was 107 degrees and the apartment’s air conditioning was broken.

That would be my worst nightmare.

You’re a member of the International Sled Dog Racing Association. Do they have some pretty good parties?
Every winter weekend is a party. We would finish up the race and get together to share stories. My husband was the official bartender. The stories were unbelievable. Losing our dogs on the trail was the most common source of tales. Every weekend my first year, I fell from my sled and watched my team disappear around a bend. Nothing beats real life for an amazing story.

Do you own any sled dogs?
At one time, I had twelve sled dogs in the back yard. Twelve howling, energetic Alaskan Huskies. But the weather changed. We’d spend the fall months training on carts, waiting for snow that never arrived. And I got two writing contracts, so my time was limited. My team is with a friend in northern Wisconsin where the snow still piles up. I miss them every day.

You call yourself a “late bloomer,” because you spent some time choosing a major and graduated from college later in life. Does blooming late have its advantages?
Definitely! I can say that now, because I’m doing what I love. I don’t think I would have had the discipline and experience to handle a writing career if I had tried earlier. And my late bloomer story seems to be motivational to others. There’s a whole cult of us, you know?

You have two books coming out simultaneously. Is this as stressful as I think it would be?
Gulp. Gasp. Not at all (lie). Right now, I have a manuscript to edit and the third doll book to write yet this year. I have to come up with an idea for the third Yooper mystery and promotion is taking up more time than I ever thought possible. I’m working 12 hour days and loving every bit of it. I encouraged my husband to try out for a local play to get rid of him so I could work. He got a lead part. Hurray. And my kids are teenagers. They HOPE I go away and leave them alone.

You’re attending Bouchercon. Having gone to college in Wisconsin, are you pretty familiar with the Madison area? Will you show me around?
Yes. Yes. I know all the hot spots. State Street is electric. We’ll have a great time.

You compare your evolution to that of a fine red wine. Do you enjoy wine?
I love all wine. One fall I gathered wild grapes along the country roads. I had to pick six pounds of itsy bitsy grapes from their stems and wash them up. It was a lot of work, but the wine turned out awesome (and very potent). I was so jealous when Michele Scott got the wine series.

You married in your mid-thirties. Where did you meet your husband?
Sitting down. We were both at a local festival, wallowing in misery over recent break-ups, when I sat down at his table. We connected immediately. Everything was perfect. Until we stood up. He’s six-four and I’m five-two. We don’t dance together much.

That’s a fun picture! How does your family help support your publishing career?
As I mentioned, my teenagers encourage me to travel and they always suggest that I take their father along. Yeah. Right. I was a teenager once. They also have picked up more of the housework without much complaining. Or maybe I’ve lowered my standards without realizing it. I’m looking around right this minute. Gads! What a mess. Hey, kids….

Nice to hear someone else has a messy house.

You mention on your website that you have a menagerie of pets. How many pets do you have right now?
I have two aging border collies and two house cats. A stray cat and her kittens are living in my garage. I’m not sure what to do about that. We’ve also had raccoons, opossums, deer, and turkeys roaming our backyard.

Where can readers find out more about your two new mysteries?

Visit my website and read an excerpt from Murder Passes the Buck. www.debbakerbooks.com

Thanks for the interview, Deb! See you at Bouchercon!
Posted by Julia Buckley at Thursday, July 27, 2006

Direction can make most huge characteristics in an understudy. Planning gives its understudy an ideal rule to manage its reliably life gives significantly more effectively. A not all that awful educator should try to make his understudies hitting and secure with nearness. https://www.freesentencechecker.com/master-professional-writing-with-sentence-editor/

Compulsion of messing around for so much time brings about the unfriendly impacts on the strength of player. A few players are entirely habituated of messing around that they don't deal with their supper times. you can check here

She is very good writer. She knows very well that how to change yourself into a book. How you can change your life by writing books. Students can explore the details about content writing. This will be a nice thing to share your life with the other world.

She is sharing some interesting moments of her life. It is good to read this article taht is about content writing. You can see that how much she had done in her life. She has a lot of difficulties and some turning points in her life. That is why she is the best writer in the world of misty.