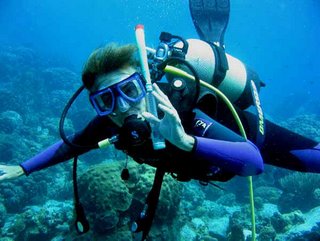 Hi, Kathy. Your protagonist, Hannah Sampson, is an underwater crime scene investigator. Is there a lot of underwater crime?
Of course in my books there is plenty of underwater crime! Hannah investigates murders that take place in sunken ships, searches for evidence in the underwater debris when her best friend’s boat explodes, and dives into an airplane when it crashes into the sea under suspicious circumstances. And what better place to hide a body or a weapon than in the vast ocean? In real life, underwater investigation is a growing field and police divers investigate underwater scenes all the time. In the States, that diving can be in mucky lakes where the diver can barely see her hand in front of her face not the beautiful tropical diving that Hannah does.

Your first literary inspiration was Carolyn Keene and her Nancy Drew Mysteries. What was it about Nancy that captured your imagination?
Nancy Drew was one of the few female protagonists for young girls when I was growing up. I could identity with that heroine and the fact that she was out there solving mysteries. Forget the Hardy Boys, I wanted to read about strong, gutsy girls.

Your books are set in the Caribbean, where you and your husband like to spend two months of every year. Wow. Are you self-employed?
I write full time, which gives me plenty of flexibility. My husband teaches, so our summers are free. We have a 38 foot sailboat which we keep in the islands. I get some writing done on the boat, in quiet turquoise anchorages watching fish jump and pelicans dive. Great places for inspiration. And while I’m in the islands, I’m interacting with the locals, many of whom end up in my books. I´m soaking up the culture and the environment, doing lots of diving and sailing. Many of the events that occur in the books—dramatized of course--actually happened to us.

Have you ever had any close calls under water? Sharks? Loss of oxygen?
I’ve never had any close calls but I’ve been plenty scared. Diving is one of the most dangerous activities one can get involved in. There´s all kinds of potential for getting injured or dying under the water. Let’s face it, breathing at 100 feet down is not an activitity that humans are adapted for. If anything can happen in terms of air supply or getting caught in debris, or lost in a wreck. And if the diver panics, which is easy to do when you’re in such a foreign environment, bad things happen. A lot of divers die because they lose their abiltity to think clearly. The deeper you go, the worse it gets. Divers call it the “martini effect.” Every 50 feet in depth is said to be like drinking one martini. And if a diver panics and races to the surface, he or she risks the bends, which can lead to paralysis or death. The scariest thing I ever experienced was in the Sea of Cortez when a school of some twenty hammerheads swam by. They completely ignored us!

Your first book was called Swimming with the Dead, which is a very cool title. How long was the idea in your mind before you wrote this novel?
When I decided I was going to sit down and write a mystery, the concept for my underwater investigation series quickly followed. First came my protagonist, Hannah Sampson. She’s a strong female lead, a homicide cop, and police diver who is driven to find justice for the victims of crime. Then came the setting. I love the Caribbean and the ocean. If I couldn’t be there, I might as well be writing about it during a cold Colorado day. It’s funny about the title. I’d originally titled it Parrot Fish Don´t Talk. It got changed when my publisher thought people wouldn´t know what a parrot fish was. Thus Swimming with the Dead was created one day as I sat in the dentist´s office.

You are a certified diver. What must one do to become certified?
I got certified through an organization called PADI which was offered through my local dive shop. When I got certified 20 years ago, the course was 8 weeks, two nights a week. A lot of classroom instruction about equipment, safety, dive tables, and plenty of time in the pool. Then, we had to do an open water dive. For us, that took place in at Blue Hole in New Mexico, one of the few locations that was deep enough with good visibility so that the instructor could test our skills. That involved clearing our face mask, removing it and our regulators under water. It was a very rigid testing procedure in order to get a certification card. I recommend that anyone who decides to try diving get certified with a reputable agency like PADI.

Tell us about your latest book, Under Pressure.
Under Pressure opens with Hannah Sampson out on the police boat training her new partner when a small commuter plane crashes into the sea just 100 feet off their bow. They are in the water immediately and diving down to try to rescue survivors, one of which is a nine-year-old boy. I called it Under Pressure not only because the pressure under the water increases as a diver goes deeper, but also because of the intense pressure the pressure Hannah experiences as the story develops. Her relationship with O´Brien is floundering, she’s got a nine year old boy on her hands, and she’s trying to find a killer, all with a hurricane bearing down. Anyone who has read the books knows that Hannah is driven. It´s her greatest attribute and biggest flaw. In Under Pressure, it takes that nine-year-old boy to pull her back from the edge of self-destruction.

Tell us about your newest writing project. How much of each day to you devote to writing?
I am working on a standalone mystery that is set in Colorado and opens with a young woman being convicted of murder. That’s all I’m going to tell you! When I´m fully engaged in a project, meaning not out promoting a book or tending to family responsibities, I write 5 days a week from nine until about two. When things heat up and deadlines approach that schedule can shift to seven days a week, eight hours or more a day and I forget to eat.

The picture of you underwater is terrific, but I also love the picture on your website of you as a little girl. I think the same person who cut your bangs cut mine back then. Is there anything about your life now that differs from what you thought you wanted when you were still that little girl?
Aren´t those bangs great! My mother cut my hair. My life has been one adventure after another, which is just what I was dreaming about when I was reading those Nancy Drew books. Not to say that it’s always been all fun and games. There have been hard times and failures along with the successes and joy. But one thing I can say is that it hasn’t been a traditional path. I’ve worked as a flight attendant, spent a year hitchhiking around Europe, was a ski bum. I settled down, had kids, was a single mother, taught writing, and am now on the best adventure of all--writing mysteries.

What sorts of things do you do to promote underwater mysteries?
I do everything -- radio and TV interviews, book signings, conferences, workshops, events for book groups, libraries, and writing groups. I also have a website which I think is critical for every author. Check it out at: www.ksbrandt.com. I´ve got a contest going on there right now.

Do you get fan mail?
I do and I love it. People contact me through my website. After a long day at the computer wondering if the writing is working, there’s nothing like having readers write to say how much they love my books. Just yesterday, I got an email from a man who had just finished Under Pressure. It was his birthday and his wife had given him the book. He said he went straight to his hammock with his dog and a glass of wine and stayed there all day reading. They were supposed to go to a fancy restaurant for dinner. Instead, he stayed in the hammock reading till he finished. He said it was his birthday and his choice. What a compliment!!!

Have you ever dived somewhere other than the Caribbean? Where would you most like to dive that you haven’t already?
Most of my diving has been in the Caribbean. I really want to get down to the Great Barrier Reef. Some day maybe.

Thanks for talking with me, Kathy!
Posted by Julia Buckley at Wednesday, July 12, 2006