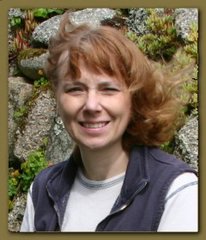 I looked over your website (www.dcbrod.com) and it’s beautifully done. Did you design it yourself?
No, I didn’t. Beth Tindall at Cincinnati Media designed it for me. She and I went back and forth with ideas for that home page. I told her I liked crows, and she sent me that little crow that’s on the left. Although it wasn’t quite right for the main photo, I didn’t want to lose it. Then my husband and I were in Scotland last year, and I took the cave/rock photo on Fair Isle, a tiny gem of an island that lies about halfway between the Orkneys and Shetland.

You publish books as D.C. Brod. What prompted the decision to go with a gender-ambiguous name?
I went with my initials because my first book, and the next four, were written first-person male point of view. I think sometimes readers make an assumption that if the author is female, the first person narrator will be female. I didn’t want my readers to have to make an on-page sex change to my character, so I went with initials, which I thought might signal that you shouldn’t assume.

According to your website, you like watching crows. Why?
I know that many see crows and ravens as noisy pests, but they’re clever, intelligent creatures that have not only adapted to humans, but also learned from them. (They don’t just sit around and croak, “Nevermore.”) I think I first became intrigued with them a number of years ago when I read the novel Crows by Charles Dickinson. Then I started reading nonfiction books about them (i.e. Mind of the Raven by Berndt Heinrich). They’re fascinating creatures and also quite prominent in myth and legend. The West Nile virus has taken a toll on the crow population, which is sad. So, whenever I hear or see one, I’m heartened. (The other morning two very loud ones right outside our bedroom window at 6 a.m. nearly made me rethink this.)

You have a cat named Travis McGee. Might we assume you are a John D. MacDonald fan?
You bet. He was really my inspiration. I hadn’t read a lot of mysteries when I was young—Agatha Christie wasn’t to my taste—and I had an idea for a character in my head, but didn’t know what to do with him. I picked up a J.D. MacDonald novel (ironically, it was his last—The Lonely Silver Rain) and it was like coming home. I had “discovered” detective fiction. McGee (the cat) is quite elderly now—about 17—and cranky, but has worn the name well.

The town in your Quint McCauley mysteries is fictional, but is it based on theSt. Charles, Illinois area?
Yes, Foxport is actually St. Charles, Batavia and Geneva all rolled together. I liked using a river town—the river almost becomes a character—and it’s a place where people come for the shopping, dining, the river. So it’s not the kind of place you might expect bad things to happen. But they do.

You have mentioned that you started writing mysteries because you heard a voice in your head. We writers all understand the “voices in the head” phenomenon, but it’s interesting that your voice evolved into a male protagonist. What are the challenges in writing from a male point of view?
You know, I really didn’t think much of it when I started writing. Men and women are more alike than not. Over the years I’ve had male readers say that Quint doesn’t reference sports enough. Well, not all men are sports fanatics. (My brother, for instance.) And another guy told me that he didn’t think Quint would know what a tattersall shirt was. Oddly, I didn’t know what one was until my husband told me what the pattern was called on these L.L. Bean shirts he’d ordered. I guess if Quint were a stereotypical guy, he’d be hard for me to write. But I like to think he’s not. I actually wrote him in third person first, but found I liked the conversational tone of first person, at least for this character. (I do have male readers take a look at my work prior to sending it off and occasionally they’ll point out something that needs tweaking.)

You enjoy painting as well as writing. Do you ever sell your paintings?
(Laughter.) I’m not a very good painter, but I enjoy doing it. Watercolors in particular. I find it’s nice to have a creative outlet that’s just for fun. It’s a way to relax. I paint a lot of birds—they’re small and colorful.

Your last novel, Heartstone, was not a Quint McCauley book, nor is the current one that you are finishing (a follow-up to Heartstone). Tell us a bit about how this story evolved, and when your new book will come out.
Heartstone came about because of a gemstone—a piece of alexandrite. I had gone to interview a gemologist about a series I was thinking of doing involving gemologists. He showed me this quarter-carat stone that changes color according to lighting—it goes from red to green. I was smitten. That stone sort of imbedded in my mind (sounds painful, doesn’t it?) and became bigger. I knew it had to be an important stone, not just because of its size or its monetary value. So, I borrowed from another love—Arthurian mythology—and put the stone in the hilt of the sword Excalibur. In my book, it’s no longer in the hilt and comes into the possession of a young woman in the present day. Her father has gone missing and has left her this stone. She’s got to figure out where it came from and why he gave it to her. I call the book a contemporary thriller with an Arthurian twist.

I’m currently finishing up a caper (not sold yet), not related to
Heartstone. Once that is finished, I’ll be working on a sequel to Heartstone. There’s an obvious sequel, and I’d like for there to be three books in the series.

You are a lover of “sparkly things.” What is the most valuable stone that you possess?
It’s really more than “sparkly things.” I love stones. Whenever I travel I like to bring a stone back from the place I’ve been—one I pick up and put in my pocket. It’s like bringing a piece of the country back with me.

But the sparkly ones are very nice as well. Aside from my diamond engagement ring, my most valuable stone is a one-carat alexandrite ring. When I sold Heartstone, I went back to that gemologist I mentioned earlier. He didn’t have any alexandrite at the time (the genuine mineral is rather rare), but on his next buying trip he picked up a couple for me and I chose one. The color change is beautiful.

Will Quint McCauley return?
Probably not in novel format. At least not at this point. But I would like to do some short stories featuring Quint. I really enjoy writing his voice.

Will your fans be able to find you at Bouchercon in the fall?
I was debating whether or not to go, and now I see that it’s sold out. So, I guess that settles it. But I am looking forward to Bouchercon in Anchorage in 2007.

Where can readers find out more about you?
They can go to my website. Or read my books. I think there’s always something of the author in his or her books.

Thanks for the interview!
Posted by Julia Buckley at Sunday, August 13, 2006