C.J. Westwick on His Re-Titled Novel, Promotion Ideas, and the Days of the Lamplighters 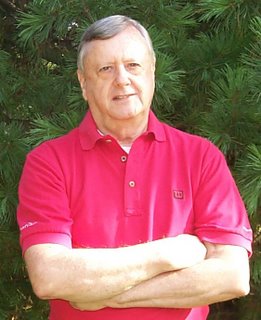 Your name, I have now found out, is not a pseudonym (even though it would make a good one). But you did come up with the name Bret Lamplighter for your protagonist. Whence came this name?
I’ve never liked the short one-syllable surnames many central characters have, such as Clive Cussler’s Dirk Pitt or Superman’s alter ego Clark Kent. And since my family owned the Westwick Foundry in Galena, IL, I’ve always loved the rugged old iron grates and fences and furnaces they forged in the early nineteenth century. Especially, though, the foundry made wonderful gas lamps that still adorn the streets throughout old Galena — although they were converted to electricity many decades ago. In my youth, Grandfather Westwick would occasionally point out one of the gas “lamps” and tell me about the three or four full time Galena Lamplighters who would fire up the gas lamps at dusk and extinguish them at dawn. I always imagined these lamplighters had a really neat job. That happy memory popped into my mind when I needed a name for my protagonist. The first name, Bret, just seemed to work well with the surname Lamplighter.

(Here a friend of C.J's hugs an old-time gas lamp in Galena, Illinois. 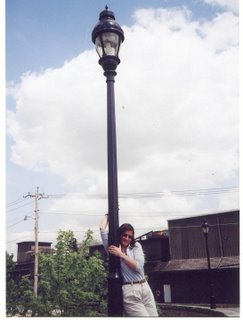 Tell us about your book, Emerald Enigma. Was it also published under the name Caribbean Green? Which title do you like better?
In April 2003, I published Caribbean Green. The thriller/mystery novel sold well, but I always felt it would have sold much better if another person hadn’t also published a novel the same month and same year with the same title. In fact, even the cover art design was similar to mine. The text of the other book was different, however, so I couldn’t prove any impropriety. Two years later, Krell Press publishing obtained all rights to my novel, and asked me to change the title. Emerald Enigma became the new name for the story, and the cover art was changed enough that it didn’t quite resemble the original version. Although most of the text remains the same as before, there are now fabulous maps at the beginning of each chapter, as well as a “time and place stamp.” These changes were added since one of the major premises of the adventure revolves around an absolutely-precise deadline imposed by an insurance company. I definitely prefer the Emerald Enigma title. By the way, Emerald Enigma now has a short 5,500-word Prequel published that gives some background on Bret Lamplighter and his infamous and hurtful junkyard dog incident. NOTE: No animals were harmed in this suspenseful happening.

According to Publisher's Marketplace, you have "worked as managing editor of a southern Illinois newspaper, as a copywriter at three advertising agencies and as a writer/producer of more than one-hundred educational filmstrips." You didn't make those films about our changing bodies that we all had to watch in the fourth grade, did you?
Oh, oh. Guess I’m going to have a scarlet letter “F” affixed to all my Armani suit lapels — F for Filmstrips. Yep, I’m one of those people at the Society For Visual Education in Chicago who gave teachers a half-hour reprieve from teaching while they showed such award-winning titles as “Hungary’s Collective Farms,” “Akron, Ohio: The Rubber City” (you can imagine the high school teens laughing at that one), “Basic Parts and Their Functions” (no, you’re wrong; this is about sewing machines) and “Let’s Take An Airplane Trip.” Each writer/producer at SVE was assigned filmstrip projects ranging from Pre-School grades to Adult Education courses.

Okay, then. And I'd like to see the one about Hungary. My grandfather grew up on a farm there.

Now, back to your filmstrips: Were they interesting?
Even though your original assumption was right, we did our darndest to get the filmstrips absolutely perfect — because we were looking for good reviews, too. A review in the “Library Journal/Student LJ Previews” of my “Behind Your Physician's Prescription” sound filmstrip stated “. . . an interesting and provocative filmstrip which will command the attention of the young adult.” Yeah, I bet it did.

You're a versatile guy. Why do you like writing mysteries?
I’ve always loved reading a variety of books. My mother would read to my brother, sister and me long before any of us started school. L. Frank Baum not only wrote “The Wizard of Oz,” but also some two dozen other Oz books, many of which were the adventures of just one of his characters. Stories about “The Adventures of the Tin Woodman” and others in Baum’s series were vivid and exciting to me. I always thought it would be wonderful to be able to write stories as L. Frank Baum did — to bring fantastic tales of fabulous characters to people of all ages. Later in life, I found I enjoyed stories written by such masters as Poe, Ludlum, Joseph Conrad, Le Carré and Melville – and decided I liked the element of mystery in a good story.

What sorts of things have you done to promote the book?
I retained a publicist who has sent review copies of Emerald Enigma to the media. I’ve had a radio interview with Baron Ron Herron. My publisher and I have put out many ARCs at such venues as Thrillerfest in Phoenix. Also, we have distributed about a thousand 30-page bound booklets of Emerald Enigma sample chapters. We put them in railway station commuter areas, library reading rooms, and bookstores where we ask (beg?) the manager to place one in the bag of each person buying a book of any genre. These have already generated much positive interest. We put a half-page ad for Emerald Enigma in the August Soldier of Fortune Magazine and a full page ad in the playbill for Northwestern University’s Waa Mu theatrical production. What a contrast.

Do you read mysteries? What are some of your favorites?
I love mysteries and was surprised to see on Barnes & Noble’s web site for Emerald Enigma (under the portion that reads: B&N Customers Who Bought This Book Also Bought) The DaVinci Code – Dan Brown, Beach Road – James Patterson, Judge & Jury – James Patterson, At Risk – Patricia Cornwell, Angels and Demons – Dan Brown. My surprise was that I had read all five of those books. I also like Michael Connelly, Ann Coulter, Dean Koontz, Jeffrey Deaver and Steve Martini.

What's your favorite Chicago eatery? (This has nothing to do with mystery--I just like food.)
My wife and I enjoy Hackney’s, Don Roth’s Blackhawk, 94th Aero Squadron, Allgauer’s, Long Grove Café, Berghof’s.

Will you be at Bouchercon?
I’ll be at Madison’s Bouchercon, but couldn’t find a motel closer than six miles away from the Con. Madison’s traffic isn’t all that bad, though, so it should be an easy back-and-forth drive each day.

What's your average day like?
My average day consists of trying to get in at least five pages of the next book I’m working on. As you well know, Julia, five pages sounds like nothing to many people, but I’m including the re-reading, proofing, and rewriting until it sparkles like a highly faceted luxurious emerald from the mines of Muzo, Colombia. :)

Well, bless you, C.J. My current average is zero.

What are you writing and polishing now?
At this point in time I’m writing a sequel to Emerald Enigma that takes place in — believe it or don’t — Russia and Ukraine. And yes, it not only includes Bret Lamplighter but also Abby Duchamps. Merde! It’s a bit early to have anything for a name except the working title. It’s at page 320 at this time.

Wow! Thanks, C.J. How can people find out more about you?

Thanks for giving me this opportunity to be on your wonderful blog. Readers can learn more about Emerald Enigma at www.emeraldenigma.com. Also, Amazon.com and B&N.com have me listed under Emerald Enigma in their Books portion. Many independent stores carry Emerald Enigma through Booksense.com.
Posted by Julia Buckley at Monday, September 04, 2006