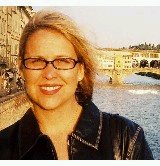 You write flash fiction. What’s attractive about this relatively new genre?
Flash is a way for me to explore new horizons. I experiment – new voices, new characters, new settings. Plus, the challenge of telling an entire story in under 1,000 words is humbling, and very satisfying. You know how Johnny Depp takes on any role that he thinks will challenge him, and isn’t afraid to make a fool of himself? That’s how I view flash, and shorts in general.

Your book, All the Pretty Girls, comes out next year. What’s it about?
ATPG introduces Homicide Lieutenant Taylor Jackson, a metro Nashville detective carving a satisfying life out of the crime world. She comes from money, but has eschewed that life to be a cop, and has the respect of most of her peers. ATPG find her working two major cases, the serial rapist known as the Rainman, and a serial murderer who passes through Nashville on his deadly spree – leaving a body, a hand, and snatching a local girl. Taylor’s lover, FBI profiler John Baldwin, is hot on the tail of the Southern Strangler, and their cases intersect in interesting ways.

Cool. You live in Nashville. Have you ever met Chester Campbell?
I have, of course. Who hasn’t met Chester? He’s the treasurer of my local Sisters in Crime chapter and part of the SE Mystery Writer’s of America Chapter. Chester’s everywhere. Great guy!

Well, I haven't met him except via interview, but I hope to change that at Bouchercon.

How do you like blogging at Murderati? How did you happen to become a part of this group?
Murderati is a blast. It took several tries to find my stride, but now I’m comfortable with essaying, which has never been my strong suit. There’s something so scary about opening yourself up on a blog, to say hey, I’ve made this mistake, or I’ve had this success, and wonder if anyone really cares. The Murderati members are amazing, and the readers are even better.
Pari Noskin Taichert asked me to join, and I jumped at the offer. She took a major chance inviting an unpublished author onto the blog. Happily, I rectified that situation, but I’ll always be grateful that she and the rest of the Murderati crew were willing to take a chance on an unknown.

Why do you like mysteries? Who is your biggest mystery influence?
When I started reading mysteries, I was devouring authors like Sandra Brown, Tami Hoag and Patricia Cornwell. I bought every James Patterson book. As I grew as a reader, I discovered some amazing voices, people like John Sandford, Lee Child, John Connolly, Michael Connelly, Robert Crais. I aspired to write like Sandford and Connolly, and hope that I achieve that goal. I adore some of the new authors out there. Robert Fate and Cornelia Read have been my two favorite wonderful discoveries this year, and I adore Tasha Alexander and Alex Sokoloff. There’s just a bunch of great new fiction out there. I wish I had more time to read so I could rejoice in the written word of others more.

I think I’m drawn to mysteries because the authors right the wrongs, the black hats lose (or the story portrays black hats with such amenable action that we root for them). I like to feel swept away, breathless, uncertain what might happen next. I’m always so disappointed when I figure out “who done it.” I’m not as well read as a lot of people, so I still can get fooled pretty easily. Kudos to the authors who do that for me; you’re guaranteed sales for life.

Since you're in Nashville, I have to ask: do you like country music? Who are some of your favorite artists?
No, I really am not a country music fan. I’m into more rock and alternative. I dig U2, local bands like Jason and the Scorchers, Richard Stooksbury and the Glaring Mistakes, AC/DC, The Cult, stuff like that. And I’m a classical junkie.

You’ve blogged about the fact that a writer should grab a reader in the first two minutes. I think most publishers agree with you—but does the “grabbing” have to be a murder? What else gets your attention as a reader?
No, no, of course not. Though a murder is generally quite “grabbing.” I truly believe you have a finite amount of time to capture your reader's attention – be it with spectacular prose, engaging characters, a unique setting, even a brilliantly different point of view. I mean, look at literary novels. Usually they aren’t dropping bodies, yet they capture the reader's interest. It’s an easy device, a murder, to grasp attention. The trick is to keep them turning the pages. You can drop body after body, but if you don’t write well, don’t feed the reader's imagination, they’ll put the book down and move on to something else.

How do you apply the rule above to your own writing?
I drop a body on the first page and move on. No, I’m kidding. In ATPG, I do open with a murder, but I hope it’s the POV that will draw the reader in. The new book, on the other hand, opens with a media interview, and the readers is quickly aware that people are dead. The third has a completely different kind of scene, but I think it’s just as effective.

There are many different ways to open a book, but since I’m writing psychological thrillers, there’s no sense beating around the bush. I like to start with a bang and keep the hits coming throughout.

What’s the atmosphere you need to do some good writing? Do you need silence, white noise, lit candles, blaring radio? Or does it not matter?
I’m a silence person to an extent, though when I’m writing emotionally charged scenes, murders, sex, conflict, I have a few classical CD’s that I employ to keep me intense and focused. Rachmaninoff’s Piano Concerto #3 is brilliant, Berlioz’s Symphonie Fantastique is chilling. Tchaikovsky is always a good choice, and Joaquin Rodrigo’s Concerto de Aranuez is stellar for emoting. It’s the basis for all of the sweeping music in Raiders of the Lost Ark. Of course, I’ve been known to throw some Smashing Pumpkins or Nine Inch Nails in for good measure.

Someone commented on DorothyL that there are several writers who go only by their initials. Why did you decide to go by J.T? Do you feel it makes you marketable to a wider audience?
Ah, the question I fear I will have to answer for the rest of my days. :)
My full name is difficult to pronounce and even more difficult to spell. JT was a nickname growing up, and my agent suggested we go with it. What I find fascinating is that so many of the initialed authors have a J – MJ Rose, PJ Parrish, JB Thompson, CJ Box… I could go on and on. What’s that about? At least I know mine’s organic.

And yes, there is the gender issue. I know my work will appeal to male readers, and if they actually get turned off seeing a female name on the cover, hopefully this will counteract that. We’ll see, huh?

What are your writing goals for the year?
Finish book 2 by November 1, get it all edited and done so I can start book 3. I’d like to do some more shorts, but between Killer Year and the novels, my spare time is getting sucked away. I’m sure I’ll have a few more flash pieces to submit, at the very least.

Once next year rolls around, I need to have Book 3 done no later than July. So I’m going to be a good girl and stay home, work on my books and emerge in time for ThrillerFest 2007, like a butterfly out of the chrysalis. Or a writer with a big lump on her butt from sitting at the computer for a year.

Thanks so much for talking with me, J.T!

No, Julia thank you! This was a lot of fun!
Posted by Julia Buckley at Saturday, September 09, 2006

Another fantastic interview, Julia! I always find the 'drop a body on the first page' discussion interesting - of course, I have my own opinions. I can't wait to read JT's book. Can you believe she hasn't offered yet? Between you and me, Julia, the suspense of waiting to read it is killing me, and I can't believe it will be 14 months before it comes out.

And I can tell you her real name, but only for a suitable bribe. =)

Fine. 2 can play at that game. Go look at your inbox!

Hmm, let's see--chocolate might be good. But J.T. can always counterbribe, so that's no guarantee . . .

Ah, that's okay. I manipulated what I wanted out of her.

Great interview! But now I, too, am dying to know what JT stands for. Could be a good opening to a novel. "They called her JT and no matter what they bribed her with, she wasn't telling anyone what those two letters stood for..."

I like that, Patry! Wouldn't it be funny if we all started a novel with that line? :)

Fabulous interview, Julia. JT makes a great subject, doesn't she? And yes, I know what her initials stand for (and she's right, it's hard to spell). She knows what my JB is for too, but we're both sworn to secrecy. (Even Lee Child couldn't get me to tell him, and we all know how charming he is.)

Great job, ladies! I really enjoy reading your interviews, Julia - you have a knack for getting some really interesting information out of people!

Thanks, J.B. I guess it's appropriate on a mystery website that we would be presented with yet more mysteries: your initials and what they might stand for. I'll come up with a list of guesses.

All the pieces of the explanations have been met for the formation of the brass for the future times. The manner of the success and this page is acquired for the humans. The mutual range is devised for the flow of the offers for the persons.

Thanks, J.B. I guess it's suitable on a thriller website that we would be presented with but extra mysteries: your initials and what they could stand for. I'll come up with a list of guesses. click this site