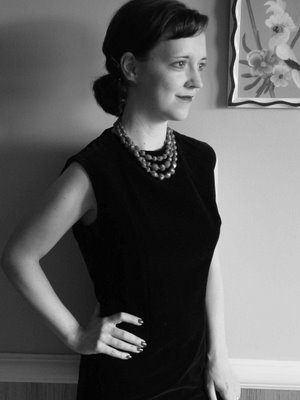 Megan, thanks for chatting with me.

Your novel, Die a Little, is nominated for an Anthony, a Barry, and an Edgar for Best First Novel, and is said to be “Steeped in atmospheric suspense and voyeuristic appeal.” How did your study of Film Noir influence your plotting of Die a Little?
Movies in general remain my foremost influence, especially in terms of atmosphere, mood. As I write, I always picture actors, scenes, sets, even costumes from my favorite old movies. I’ll be writing a scene and in my head, there will be Lizabeth Scott sitting with a martini at a piano bar or Sterling Hayden at a bettor’s window at the track. I’ve never been able to get the rhythms, the feel of certain movies out of my head.

In 2000 you received your Ph.D in English and American literature from New York University. That’s a huge accomplishment. How did you celebrate?
From what I can recall, there was more than a little beer involved.

You published a nonfiction study called The Street Was Mine: White Masculinity in Hardboiled fiction and Film Noir. Was this your doctoral thesis? Can you clarify the term “white masculinity?”
Yes, it’s basically a variation on my dissertation. My basic premise is that the hardboiled “tough guy,” a descendent of 19th-century frontier and western heroes, emerges as a key cultural icon in the ’30s and 40s in hardboiled novels because he promises a secure white masculinity amid the turmoil of the Depression through the beginnings of the Cold War. Women are entering the workforce, race relations are shifting, there is all this social tumult, but the tough guy promises—even if he doesn’t always deliver—a stability. He promises that there is still a secure role for the white guy and he can handle it all alone. Of course, as you look at the hardboiled novels themselves (I focused on Raymond Chandler and James M. Cain), you see these books are far more ambiguous, far more complex. They don’t offer a simple promise of a man who can restore order with his own wits and fists. Their tough guys really exemplify the complexities of the time period.

And, in part, I wanted to show how rich these books are, how revelatory they can be about the culture in which they were produced. They can stand side by side with the literary stalwarts, Faulkner, Hemingway, etc.

And, then again, it was a good excuse to spend two years reading tons of wonderful hardboiled novels!

An admirable pastime. Your book takes place in 1950’s Hollywood and your next novel, The Song is You, takes place in the 1940s. Do you have a particular fascination with this period?
Yes. I’ve always been transfixed by it—part of this is the disjuncture between this placid image of America that dominated—the storied apple-pie-white-picket-fence vision—and the very real social instabilities of the time. You see that in the movies of the period where this gorgeous Technicolor melodramas and lush musicals are coming out of Hollywood at the same time as these dark, sordid crime movies. In Die a Little, I have my main character literally move from the first world—from her role as a loving sister and schoolteacher in suburbia—to the latter, the underbelly of LA. Inevitably, both genres are telling the same story, aren’t they? The chasm between the way we want to be or believe we should be and what we fear we are.

Wow. You phrased that beautifully.

Your photo looks like a fifties-era shot; was this intentional? It reminds me of some of the pictures of young Dorothy Parker.
Funny that you say that. My husband, Josh, who took the picture, is a big Dorothy Parker fan, so he’ll be thrilled that you thought so. Yes, he definitely wanted to mimic that style. And given how ’50s-obsessed the book is, it seemed only appropriate!

Lisa Scottoline wrote that you mix “a potent cocktail of jealousy, obsession and danger.” How were you able to create such a dark world? Did you have to watch old films to put you in the right frame of mind?
Yes, I honestly thought of myself as trying to write myself into those movies I loved as a kid, and still love. When I was young, I’d watch them on TV over and over. They were so hopelessly glamorous. I wanted to step into Gene Tierney’s beautiful bachelor girl apartment in Laura. I wanted walk into General Sternwood’s hothouse in The Big Sleep. I still do! And the literary influences are strong too—Cain, Chandler, Ellroy, Dorothy Hughes, Cornell Woolrich.

What’s your favorite example of Film Noir? Or just your favorite film?
It’s hard to narrow it down, but I’d say Double Indemnity is the most perfect. Sizzling, cool, ugly and gorgeous all at once. But there’s In a Lonely Place for the desperate romantic in me and Kiss Me Deadly for the inner bad girl. Watching Ralph Meeker slap everyone around as a supremely nasty Mike Hammer.

Who are some of your mystery influences? You’ve been compared to Raymond Chandler; are you a fan of his work?
More than a fan. I can honestly say that, when I was working on my dissertation, I actually dreamt about him. Reading Chandler truly humbles me. The master.

Your husband is an English teacher. Do you two talk literature over the dinner table?
I’m embarrassed to say we’re just that nerdy. We also talk a lot about Deadwood. But I consider that literature, too.

When Die a Little begins, there is a wonderful underlying tension that you heighten with lines like “At the time, she said that she had no family to invite, that she was orphaned and alone.” As readers we are forced to question the veracity of the story as it is being told, because the narrator is speaking in retrospect, and she only wants to reveal things in bits and pieces. Was it difficult to maintain this tension, this slow process of revelation?
Yes, and I’m definitely not sure I succeeded. But my thought was that my narrator, Lora, isn’t necessarily trying to fool the reader, she just doesn’t understand herself at all. She’s deceiving herself and she won’t tell us things she doesn’t want to reckon with herself. As a reader, I’m just a real sucker for unreliable narrators. I love being surprised by protagonists and what they’ll do.

Many of the writers interviewed here have pets. Do you?
No. I’m deeply, deeply irresponsible and have yet to maintain a plant for more than six months. I wouldn’t do that to an animal. Needless to say, I don’t have children either.

You live in New York but your book is set in Los Angeles. Do you think living in New York at all influenced your descriptions of 1950’s L.A?
That’s interesting. I don’t know … but I do know that my rendering of LA is pretty fantastical. It’s based again on movies. Luckily, my husband is from LA and he can sometimes stop me when I’ve veered into the ridiculous. I wrote a story set in my neighborhood in Queens for Queens Noir and it was somehow harder because I had to step out of my environs a little to make it vivid. It may be easier for me from a remove.

That's interesting! What are you writing now? What are you reading now?
I’m plotting out something new—something set in neither LA nor in the 1940s-50s. But there is definitely crime and maiming. I just finished what was one of the best books I’ve read in the last several years: Tomato Red by the flawless Daniel Woodrell. Country noir and heartbreaking. Right now, I’m reading Mitchell Bartoy’s new crime novel, The Devil’s Only Friend, set in 1940s Detroit. It’s dark and vivid and wonderful.

Are you currently teaching?
No. I taught a Hardboiled Novel class in the spring and had a great time. But, as you know, there’s nothing harder in the world than teaching. It wore me out! 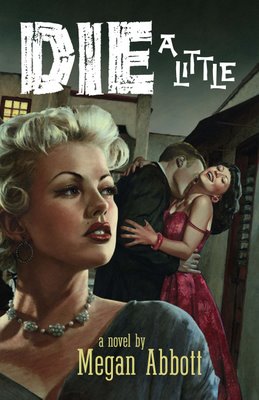 The covers of your books are terrific! Were you given some input into selecting the art?
No. But my editor, Denise Roy, really knows her stuff and I couldn’t be more thrilled with the covers. Richie Fahey has done both of them and I stare at them longingly hoping one day to write books worthy of their sumptuous sleaziness.

How can readers interested in Die a Little and your other works find out more about you?
You can definitely visit my website and/or drop me an email (www.meganabbott.com). Thanks, Julia—looking forward to seeing you at Bouchercon!

See you there, Megan!
Posted by Julia Buckley at Thursday, September 07, 2006

There are ten ice breakers way to awake you in during the work and listening music marvels is one of them. You can also get this way on find this for your comfort and you can use these methods in your daily life.

Users of online gateway stores must know about this news that is pretty sad for them related to closing of all stores. Writers of books get help with hire of book try here from online qualified writers of world.

Dental issues are significant and everybody is cognizant about their teeth. This blog gives that how you can remain in market of dental by giving helpful hints, on the grounds that there is more finishing in the market of dental. https://www.passivevoicefixer.com/advantages-of-passive-voice-finder/

This blog is useful in getting information about the regular sensitivities that lands in youngsters' and advises us how to fix it practically 50% of the kids' are experiencing occasional hypersensitivities. I to get check the punctuation. useful site