Carole Shmurak Talks Science, Show Tunes and the Joy of Reinventing Herself 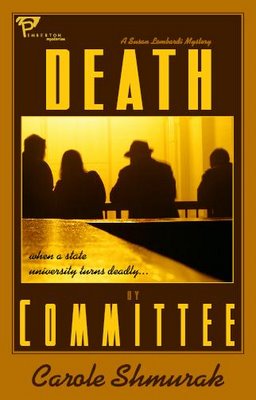 Hi, Carole! Thanks for chatting. Your website says that you always wanted to be a writer, but instead went into science research. Why? Had you heard that the math and science jobs paid the big bucks? :)

Partly my family - my dad was a pharmacist, my two older brothers were doctors, so I was raised in a family that lived and breathed medicine. Partly the times (post-Sputnik), when every bright kid was encouraged to go into science. Partly my own inclinations: I was fascinated with DNA and molecular biology. I honestly never thought about money. And I wasn’t in research long; I went into teaching fairly quickly. I just didn’t have the right temperament for research.

When you returned to writing, what made you choose mysteries?
I read mysteries as a girl (Judy Bolton), then became too busy reading other things in high school and college. But shortly after college, I discovered Dorothy L Sayers. After I’d read all of Sayers’s and Allingham’s novels, I read some of Sayers’s essays on detective fiction, which led me back to Trent’s Last Case and some of the other pre-Golden Age stuff. In the ‘80s, with the appearance of Kinsey and VI and the other women sleuths, I started thinking about writing some of my own.

You love Broadway musicals. So do I. What’s your favorite? Do you sing along when you listen to the cds?
I sing along in my car, or when no one is listening (except my husband). It’s so difficult to name one favorite. I think Guys and Dolls and Finian’s Rainbow have near-perfect scores. I love some of Sondheim (Follies, A Little Night Music, Sunday in the Park with George - a little hard to sing along with that one!). I think Gypsy has the best overture ever, and A Funny Thing Happened on the Way to the Forum has the best opening number. I could go on and on…More recently, I loved Wicked, Avenue Q and The 25th Annual Putnam County Spelling Bee and seeing Harry Connick Jr. in Pajama Game.

You have a daughter named Jill Susannah. Every time I look at this name I want to sing “Jill Susannah, oh don’t you cry for me!" Does anyone else do that?
I hope not! Of all the names that her friends have called her, my favorite is Shmurakulous.

Okay, enough with the silly questions. Tell us how you came up with your first book,
Deadmistress,which was named a Notable Book in the Writer’s Notes Magazine Book Awards contest for 2005. 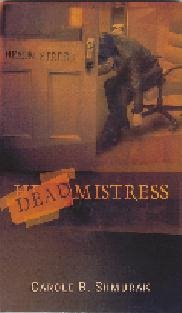 The idea came to me sitting in the faculty lounge of the girls’ prep school I was teaching at in the ‘80s. We were griping about the headmistress, and someone remarked that since she had a British accent, everyone awarded her 10 extra IQ points. At first I thought about acquiring a British accent myself, so everyone would think I was smarter too. Then I thought, what if she really wasn’t British and was just putting us all on? And then the character of Sabena Lazlo came to me - a headmistress who was not who she pretended to be. I didn’t start the book till ten years later and didn’t finish it till 2001 - life kept intervening (like starting a whole new career in the ‘90s).

Did you learn lessons from the publication of that book that you were able to apply to your second, Death by Committee? Great title, by the way.
Thank you. Everyone who has ever worked in an academic community loves that title, because we’ve all been on so many deadly committees. Lessons? Hmmm. I learned a lot from my Writers’ Group while I was writing the second book, but I can’t think of what I learned from the publication of the first mystery, except maybe how much work it is to promote a book. I already knew about the pluses and minuses of publishing with a small press from my YA series, which I co-author under the name of Carroll Thomas.

Diana Vickery has reviewed you quite positively on her Cozy Library website. Do you have difficulty reading your own reviews?
So far, my mysteries have received mostly positive reviews. My one non-fiction book got an unfair and wrong-headed review in an academic journal, so that was difficult to read.

You spell your name Carole, with an e. Are you named for Carole Lombard? 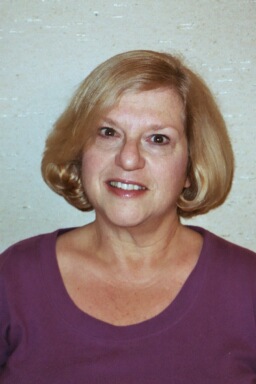 Oh, you are so smart!! My mother had this thing for movie stars; I have a brother named Leslie for Leslie Howard, and I am indeed Carole with an E for Carole Lombard. (Unfortunately she picked two actors who died in plane crashes.) But did you notice that my detective is also named for her? Susan Lombardi.

Ah--that one I hadn't noticed, so I guess I'm not that smart after all. What sort of touring will you do for Death by Committee?
Not a lot. I’m speaking in dozens of bookstores and libraries in CT, and attending book parties in Cambridge MA and Chappaqua NY, but not doing much else.

Well, that's a lot in my book. You grew up in New York, but you and your spouse live in Connecticut. How do the two compare for you? Do you miss NY?
We both grew up in the NYC area and get there as often as we can. We both start smiling when we get the car parked and start to walk around Manhattan. In CT, we have a house we love on a nice wooded lot and enjoy the relative peace and quiet of our home, but for museums and theatres and restaurants, what compares to NY? (But I do have to mention that as theatre junkies, we also spend a week each summer in Niagara-on-the-Lake in Ontario, where the quality of the productions matches and sometimes surpasses almost anything you can see on Broadway.)

Cool. Your books have great covers. Do you have any input into the designs?
Thanks, I love them too. I have had minimal input: for Deadmistress, I got them to change the dead woman’s hair from blonde to brunette. For Death by Committee, I got to tell them what my favorite was among three possible covers, but the sales manager had the final say. Fortunately, he agreed with me. And Sterling House has a very talented artistic staff.

How does your family feel about you being both a scientist and a mystery writer? Do they help with P.R?
Well, I’m not a scientist or even a science teacher anymore. I think my family and friends are tickled by the way I re-invent myself every couple of decades. My husband and daughter don’t do any PR, but I do have some friends that help get the word out about my books (for example, the book parties I mentioned above).

How can readers find out more about you and your books?
Visit my website (and read about my YA books too):
http://www.mattytrescott.com/carole.htm

Read an excerpt from the middle of the book at MyShelf.com:
http://www
.myshelf.com/haveyouheard/06/deathbycommittee_excerpt.htm

Thanks for the interview, Carol! Now you've got me humming showtunes!
Posted by Julia Buckley at Saturday, October 21, 2006

Hi I came across your post when I was surfing for an http://www.paraphrasemachine.com/choose-best-online-paraphrasing-tool/ task. I wish you could upload pictures of your creation. I got the urge to go through your post reading your profile.

I wish something like this would happen here so my friends from http://www.shouldlooklike.com/what-does-a-good-resume-look-like-and-how-to-improve-it/ and I could go together have a great time. Thanks for nice sharing.

Hey thanks for sharing this amazing stuff here. I believe that people at http://www.sentencechanger.com/faq-on-how-to-change-my-sentence-online/ might get more stuff for people who want to write quality essays.

The post is amazing and I am in love with the way you have used the amazing writing and your tips, http://www.sentenceshuffler.com/how-our-word-shuffler-service-helps-you/ However, I do not understand the link between the title and the post.

Everyone want to show it's thoughts infront of other. I will trying to make my own link and that was only happen when i just check this http://www.rephraseonline.com/know-paraphrasing-help-online/ link. This is good for me because i just check links from here.

Carole shmurak talks science, show tunes and the joy of reinventing herself these are the basis things. If these things are not available here then you go in this http://www.sentencecreator.com/how-it-works/ site. Hope from here you can easily get all these things which you want to take for you.

Wonderful post,It is great to realize that Pacifica tribune commends the first Pacifica infant with their family. The Pacifica tribune is working superbly by understanding the issues of the family Now look at more info to manage your thesis work. What's more, I think it is a decent method to call the emergency clinic to think about the new individuals from the Pacifica and get the data.

Good post,While everyone discussing the contrary things about the trump and his temper conduct yet you pass on an incredible message to the general population in the event that we individuals did not offer regard to the Donald trump at any rate regard the president situate which is the fate of our kin but now you can read the full info here for educational task. I truly respect your sense which you used for the great reason.

Good post,The one line which is pulled in me towards this news is the line "I have dependably been into making universes our words" but you can get explore the details for best work. This line is truly heart contacting and this line has the incredible effect to change the life of the general population. You completed a dynamite work for this article.