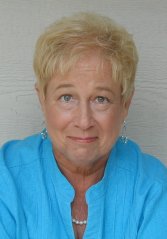 Hi, Martha! Congratulations on the debut of your book, Death Angel. At your signing you posted today, you were giving out chocolate truffles and Guardian Angel pins. Did you take out a loan to do your promotion? :)
Thank the Lord for Ebay and Costco. I try to keep my marketing efforts at an affordable level.

How has the promotion been going?
It’s been going well. I did Bouchercon and a Seattle conference and now I’m doing some West coast signings. This is the lucky thirteenth book so I’m better at this than I used to be. I used to prefer all booksignings and appearances to be behind a very large potted plant. For some unknown reason I’m more comfortable this time around.

How did you come up with the idea for Death Angel? And before you answer that, how did you happen to start writing mysteries?
I was raised on mysteries. Started with Nancy Drew and went right to Agatha Christie. That’s always been my read of choice so the first things I wrote were mysteries. I actually came up with the idea for Death Angel about fifteen years ago. I don’t think I had the maturity as a person or as a writer to do the story justice. There are certain benefits to aging.

Elaine Viets called Death Angel your “darkest vision yet.” How dark is your vision going to get?
I think she called it dark because the premise is frightening. It’s the double nightmare. A child is dead and the parents are suspected. I can’t imagine anything worse. In a perfect world we would say this could never happen. Unfortunately there are cases in the headlines where this is what happens.

You are also a humor columnist, freelance editor, and public speaker. Geez, Martha, do you cater your own events, too? What sorts of things do you speak about?
Civilians are always fascinated by the process of writing. I tell a little bit about how a book is created and the way it gets published. People ask us how we get our ideas because they are curious about the process. My usual answer is that it’s magic. As authors we know the mechanics of writing a book but really so much of it’s magic that it’s hard to put in words. It sounds like I doing lots of things but in actual fact I try to fit it in when I’m not playing golf.

In Dickensian fashion, you cite your current career as “the best of times.” You also reference some low times. What was a low point in your career?
I started out by writing romances because there is no better group for learning the craft of writing than the Romance Writers of America. Their craft workshops are the best. I was a history and geography major who didn’t have a clue how to put a book together. No one can give you the talent of writing but they can teach you the mechanics. So I wrote romances until the itch to get back to mysteries got strong enough and I had the confidence to just quit and try a thriller. The low point was being two years without publishing and getting rejections from agents and never getting a chance to get a book in front of an editor.
What are you writing now?
I’m working on a new thriller. Working title is FORGET ME NOT. It’s about a 29 year old woman who discovers she was adopted and her search for her parents.

What sorts of books do you like to read? Do you have a writing icon?
Thrillers and mysteries are my preferred reading. As with most writers, if I don’t have anything to read, I’ll read the back of a cereal box. Too many icons to single out anyone in particular. Love John Sanford books and Nancy Pickard and Janet Evanovich. I belong to the Florida chapter of MWA and we have dozens of great writers who I can rub shoulders with: PJ Parrish, Elaine Viets, Diane Vogt and Jim Born to name a few.

You wrote that it took you over a year to find an agent for you work. How did you go about trying to find one? How did you end up having dinner in New York with Michael Korda?
I sent out about fifty query letters to agents and either got rejected or they’d ask to see the book. Those who saw the book wanted major revisions but their vision was not my vision. One night watching Charlie Rose I saw an interview with Michael Korda. Talk about an icon. He’s always been a personal hero of mine. I sent him a one page query letter and told him my book was perfect for Simon & Schuster. He told me to send the book. He called me and told me he wasn’t going to buy the book. In my stupidity, I thought he called everyone. We talked about the book for about twenty minutes. Then he said he was going to send me a ticket to New York and we’d get together to see where my career was going. Who knew I had a career? I met him in New York for dinner and we talked about another proposal I’d sent. He mentioned some changes and said if I could make the changes he’d buy the book. That book was SUNFLOWER, my first thriller.

Wow. Martha, you're an inspiration. Can I take you and Michael Korda to lunch? :)

You seem like a very determined person. Is that my imagination?
I was raised to believe if you wanted something you needed to go after it. As most writers will tell you it’s determination that gets you published. It’s hard having a life and being a writer. Sometimes you can’t strike a balance and something has to give. However, some people quit once they realize it won’t happen in a day, a month or a year. The trick is to stick with it.

How do you like Vero Beach, Florida? How is it different from the Midwest, where you lived most of your life?
I love Vero. I loathe winter and will be happy to see snow only on TV. It’s sad not to see the change of seasons but my husband and I play a lot of golf and can spend much more time together than we did up north. The only thing I really miss are the friends we had up north, however since we’re in Florida most of them have found their way south in the winter months.

Well, guess what? It's October 12, and it snowed today in Chicago. I'll bet you miss it NOW.

Are you touring for Death Angel?
Yes. I’m out in Seattle and San Francisco doing conferences and signings. Most of the rest of the signings will be around Florida after this so I can get back to writing.

How can readers find out more about you and your writing?
My website is: www.marthapowers.com. To get a better idea of who I am, you should read my humor columns. My thrillers are all about what frightens me and how I deal with those fears.

What aspect of your career makes you the proudest?
I feel proudest that I’ve grown with each book. Psychologically you tap into your own emotions when you write and dig to find out what you value in your life. These are reflected in your writing. I’ve matured as a writer. I try to make each book technically and emotionally better. Writers should never stop learning because who you are as a person and a technician seeps into your writing.

Thanks so much for talking with me.

Thank you, Martha!
Posted by Julia Buckley at Thursday, October 12, 2006

Wow, Julia -- what a great interview! I'm just so excited to discover all these FLORIDA writers with a great sense of collegiality now that I am on the cusp of saying my own farewell to the snowbelt! Thanks again for the B'con pix and kind words. The photo (is that handsome lad your son?) with chopsticks and noodles brightened a chilly, rainy day here in PA., surrounded by packing boxes! All best, Liz --

Yes, I'm always finding ways to put their cute faces on the blog. :)

When is the big moving day?

Mystery writer martha powers talks about determination death angel and dinner with michael korda is checking work on the page. This page is heaving some of the interesting work published here which we can share on the page.

After the death of that guy who is doing more best work for the nation. In the houner of that guy we are giving them respect. And look at this website it become the reason which help other to remeber this guy.

Misty writing is banned and disliked due to the fears for the kids. Now you can get more info for the peaceful use of the offers. The mind blowing item has been done for the induction of the terms for the prisons in different elements.