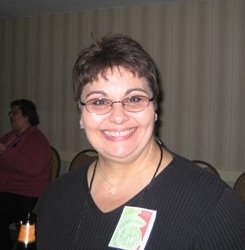 Hi, Sue Ann! Thanks for chatting with me. Your protagonist, Odelia Gray, is “middle aged and plus-sized.” Do you hear from a lot of readers who are glad to see a heroine who is, let’s say, more realistic than most?
Absolutely! I get lots of e-mail from women (and even some from men) of all ages and sizes saying they find it refreshing to see a not-so-young, not-so-thin heroine – someone they can relate to very well and who faces many of the same issues in her life.

Jaffarian is a neat name. What ethnicity is it?
It is Armenian – I am half, obviously on my father’s side.

Speaking of names, how did you come up with “Odelia”?
I found it in a baby name book. I don’t know why, but I was determined to have a character whose name began with an O. She was Olivia in the very early stages, but it never seemed to fit, so I bought a baby book and studied the names until I found one that suited the character.

You’ve got some amazing blurbs. Not to sound envious, Sue Ann, but how did you make all of these big-time writer friends?
Meeting these wonderful folks came naturally during my involvement in both Mystery Writers of America and Sisters In Crime. I also have attended a lot of mystery conferences where I have met many writers who live outside of Southern California. One of the fabulous perks of being a writer is meeting and getting to know the people you’ve been reading for years.

You list Jon Stewart’s Daily Show as one of your favorite shows. Do you and Jon have similar political leanings, or are you both just fans of good satire? Or both?
It’s definitely both. I love his dry wit and irreverence, and do indeed share many, if not most, of his political leanings. Absolutely no one can mimic George W’s laugh like Jon Stewart, although Wanda Sykes does an admirable job. (BTW, I’m impressed. You had to comb my website to get this info.)

Thanks. Your character, Odelia Gray, has a green, one-eyed cat. Does this continue your theme that people shouldn’t judge by appearances, or were you just trying to create a really memorable pet?
The odd thing is, I was just trying to give Odelia a funny pet, an animal quirky like her, but after Too Big To Miss was done I realized what a connection Seamus makes to the underlying theme of the book. It was totally something that happened on an unconscious level, but not while I was actually unconscious. 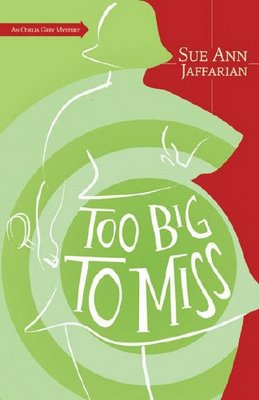 Good distinction. :) Your website doesn’t have too much biographical information. Are you a mysterious woman?
Nah, boring maybe – I go to work; I come home; I write. I’m single and live with two cats and have dinner most nights with Jon Stewart.

The Holy Pail (from your second book, The Curse of the Holy Pail) is a lunchbox, and an important clue. What came first, the clue or the title?
The lunchbox came before the title. I was kicking around the idea of centering a plot on a lunchbox and an old TV cowboy and during my research came across a collectible lunchbox actually nicknamed “the holy pail.” It was a perfect fit for the story and a perfect lead into the title.

Odelia often has very emotional attachments to food. I can relate to this, because my mom was (and is) a very food-is-love sort of nurturer. Did you grow up with this sort of family dynamic?
Not really. My mother was not a good cook and had very bad eating habits, which, of course, I picked up. Eating is emotional for me also, but not in a food-is-love way; it’s more of a food-is-legal-dope way. I think Odelia is more like me in that regard.

Greg, Odelia’s boyfriend, is wheelchair-bound, and her best friends are black. Does Odelia sometimes seek out people who she feels might be stereotyped for one reason or another?
I don’t know if Odelia sought out Greg and the Washingtons for that purpose, but I sure did. (Actually, Zee is patterned after a good friend of mine in real life.) But I like bringing real people into my books, and I want readers to see real people within the pages. For me it brings more realism to the stories. I strive to make every book a slice of life in Southern California and that includes the disabled, Asians, blacks, Latinos, even dwarfs, as well as wealthy matrons, GQ handsome bosses, and criminals.

Odelia says, at one point, that she never felt young, even when she was young. Did you ever feel this way?
Absolutely, that thought came straight out of my own life. I remember being 16 going on 32. I think this often happens to people forced to take on a lot of responsibility at a young age.

Odelia, after book one, has an interesting bullet wound. How did you decide to write this into your plot?
Again, it was something that came about naturally. She was shot; she’d have a wound from that and the wound would now be part of her physical being. It also helped me weave some background from the first book into the second one without giving too much away.

Who are your mystery inspirations?
If there is one author who has given me a vision for my own writing it would be the late Anne George, author of the Southern Sisters mysteries. I remember reading one of her books and knowing immediately I wanted to write mysteries that made people laugh about everyday events and everyday people.

Odelia loves food, and I’m guessing Sue-Ann has her favorite foods, too. What’s the best restaurant in the world, in your opinion? If I were in town, would you take me there? What should I order?
I don’t really have a favorite restaurant – I have restaurants that serve favorite items. But if you were visiting me in West Los Angeles on a weekend I would take you to the Overland Café for the best brunch in LA, and it’s walking distance from my home. You dropping by anytime soon?

Odelia, at the beginning of Holy Pail, talks about how many commandments she has broken. Are you willing to confess? What’s the most recent commandment Sue-Ann has broken?
Boy, I wish I could say it was something horribly shocking. Let’s see, I just ate half a carton of Ben & Jerry’s Brownie Batter and swore at myself for doing so. I guess it would be taking God’s name in vain. Told you I was boring. 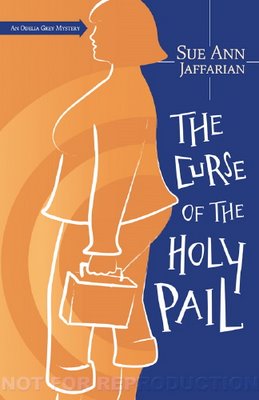 Odelia has a boss she really loves to hate. Not to make constant Odelia/Sue-Ann comparisons, but have you ever had a boss like that?
I have worked in the legal field for over thirty years, so the answer would have to be yes. But I have never had a boss exactly like Michael Steele. He is a compilation of all the stereotype bad traits of an attorney, except that he is ethical. He had to be ethical or Odelia would never work for him.

What’s the most rewarding piece of fan mail you’ve received for your Plus-Sized mysteries?
I received one recently from a reader who said that after reading Too Big To Miss she was loving herself more and thanked me for that. I’ve had several along those lines over time and each one warms my heart like you wouldn’t believe. But the most triumphant was an e-mail I received from a man who said he’d read my book because he wife had enjoyed it so much. She didn’t write, but he did to tell me he’d never look at fat women quite the same again and would think twice about how he treated them in the future.

That is indeed an accomplishment to be proud of. Is it difficult to maintain a day job and a writing career?
Absolutely – there’s not much down time for just relaxing. I have to schedule everything, even cleaning the house. When I’m not at my day job, all my focus seems to be on writing or promoting my books, or attending writers’ events. It can be exhausting. I don’t know how people do it with day jobs and families.

How many Odelia mysteries do you anticipate writing?
In addition to Too Big To Miss and The Curse of the Holy Pail, I have four more planned. Midnight Ink has bought the third book in the series, Mother Mayhem, and it is scheduled for release February 2008. I will know by book five if there will be more after the sixth one.

Where do you write your books? Do you have a cozy office? Or do you write on a laptop at lunch, or at your kitchen table while dinner is cooking?
Most of my writing is done on a PC at a desk in a corner of my bedroom and usually both my cats are nearby. Raffi likes to sleep in a chair pulled up next to mine (and he’ll whine until I do pull it close) and B likes to stretch out between the keyboard and the monitor.


Thanks for the interview!
Posted by Julia Buckley at Thursday, October 26, 2006

Thanks, Lonnie. I hope you're feeling better.

Julia, Thanks for the great interview! By the way, following in your footsteps and many others, I have now started a blog of my own. You can read it at www.sueannjaffarian.blogspot.com.

Your post is not very much detailed these days, I think you should definitely hire one of those you can try these out. I have heard they are pretty good. Thanks for sharing.

Hey, this is some amazing job that you have done providing educational stuff at http://www.rewordinggenerator.org/our-services/ with a platform where they can get all the updates.

That is such a realistic post about sue ann jaffarian talks about her plus, you have chosen some really amazing information here find out here now. I will definitely share about your blog with my friends.

Excellent post,In this video, you are demonstrating the narrative of the tattoo craftsman and the general population who are insane for this but you can get look at more info for best work. It is a motivating story for the general population who look into this field and step by step this field becoming so quick and individuals demonstrate their incredible intrigue and making the tattoo in our body.

Wonderful post,Espresso is the tasty things and individuals might want to drink it. Individuals drink the espresso since it is scrumptious and it can make the fit dynamic. With the goal that individuals can work legitimately and obviously but you can visit http://grant.proposalwritingservice.com/sponsorship-proposal-writing/ to manage your task. The espresso visit is truly astonishing article besides, it is useful as well.