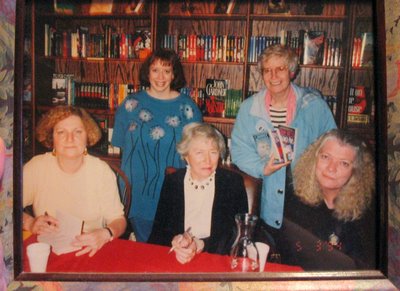 I remember the year of this picture: it's early in 1994. I had gone to the mystery bookshop across the street with my mom (we're in the back) and met three wonderful writers who were doing a mini publicity tour together. From left (if you don't recognize them) they are Dorothy Cannell, Patricia Moyes, and Joan Hess. I was thrilled to meet these women; I had read books by all of them, and they were wonderful together, answering questions, joking among themselves, being exquisitely charming.

The reason I remember so well is that I had wondered, that day, if I was pregnant. I had been extremely tired lately, and I thought that might be the cause. But I told my mother I didn't think so. Later on it turned out that I had been right the first time: my son Ian was born about 8 1/2 months later, in December of 1994.