Jon and Ruth Jordan Discuss How They Met, Why They Like Mysteries, and When They Created Crimespree Magazine 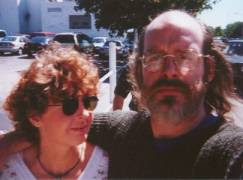 Jon and Ruth, thanks for talking with me.

You two met at Bouchercon in 1999. How did you meet? Were you attending the same panel?

Ruth: Panel? We were partying. Al Collins band: I ducked out at the same time as Jon and Ian Rankin and Sir Ian made the intros, brief and somewhat hazy. We spent the night being delighted fans and sharing conversation and booze with Ian, Val McDermid, Charles Todd. I still remember Gerry Ford spitting scotch out of his nose when I mentioned I had to leave before the banquet because I had a power lifting event the next day. Jon promised to e-mail the winners to me the next day and I didn’t hear from him for a month. Val, Charles and Ian all e-mailed right away . . . the die was tossed.

Jon: When we started emailing on a regular basis it became clear really quickly that we had a lot in common; aside from reading tastes, we also like a lot of the same music, television and movies, even [have] similar tastes in decorating, though I lean towards more is more and Ruth is a less is more person.

Was Crimespree born of that meeting, or does it pre-date your acquaintance?

Ruth: Crimespree came later. The Vegas B-Con. Jon’s book Interrogations was out. There was a group of us who’d been doing on-line reviews & articles without much control. Most of the people at that first meeting were friends from a former incarnation of RAM. Everyone was on board, although already becoming busy. We thought if we went print with our “on-line” state of mind, it would be something new and not just a retread of things that were already being done so well by so many others. Mary, Jeremy, Ali, Simon Kernick. I marvel at the folks who do both the print and internet magazines. The blend of people at that first meeting made for a strong beginning.

Jon: We had been toying with thoughts of our own website. We figured with the sheer volume, even before blogs, we’d get lost on the web. A print magazine seemed like a good answer. Plus I love magazines, the feel of them, the portability and the look.

Ruth: No, not at all, we have day jobs; we never let the magazine interfere with those . . . right, honey? And we like to entertain. Oops, I’m thinking of whom most of our parties are geared for. I .. well . . . I went to a shower a couple of weeks ago and the first question I was asked was, “Have you met Nora Roberts yet?” (answer, yes). Mystery is what we do, but I like to think there’s more.

Jon: It does seem more and more that our world is influenced by the mystery community. A lot of our friends are a part of it, and older friends are now readers also. We do like to do other things, though. It is cool that my family lets me take a break at work when I need to do things for the magazine. One minute I’m welding a punch press frame and then I’m on the phone to an author in the UK--kind of surreal at times.
Ruth, you’re hosting the Alaska Bouchercon. What fun things are in store for people who trek to Anchorage?

Oops, sorry. I am misinformed.

Ruth: In Baltimore we intend to have beaucoup the fun as well as intrigue and a bit of madness. Alaska will be a blast. People still talk about their Left Coast Crime. I think the distance and time commitments will make it an intimate Bouchercon. But they’ll have everything on the off and be fabulous hosts. I’m thrilled to be going. 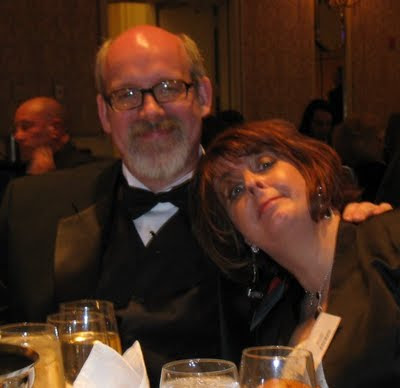 Jon: When Ruth said she wanted to host a Bouchercon I thought she was drunk. However, she had not been drinking. After a psychiatrist declared her sane, I listened to her reasons and decided that she really is doing this as a thank you to all the previous conventions and to all the fans and authors who make up the community.

However, if it all goes to Hell, we’re blaming Ruth’s Aunt Marie for talking her into it.

Sounds fair. Crimespree is a great magazine; how do you do it month after month with a relatively small staff?

Ruth: Four words. The mystery community’s support. I can count on one hand the times we’ve gone to somebody with an idea and they’ve had to say no. Plus our regular contributors. Everything they come up with makes us seem like geniuses. We try to keep getting better because they do. And damn it, if the other prints are willing to keep slaving, so are we--we are, after all, the babies.

Jon: Part of what makes it work is delegating time. It’s still a learning process and we’ve gotten much better about it. Had I known how much is involved, I might not have wanted to do it. But we have layout down to a science now and can do it much quicker. Also having loud music helps.

What’s the best part of doing what you do?

Ruth: Seeing a favorite author in print. And the friendships . . . remarkable how people with the same passion open their hearts to one another.

Jon: I love seeing friends become successful. It thrills me that a guy named Joe who told us he had a book coming out is touring for the fourth and his first paperback is in a third printing. I really really love it when people thank us for recommending books. Helping people to discover the books we love is really great.

I don’t get the sense that you have much free time. When you do, how do you like to fill it?

Ruth: Laundry and vacuuming. Really, my first wedding gift was a vacuum. We see a lot of live music--Honey, did I tell you Alice Cooper tickets go on sale Saturday?

Jon: I read comics, watch movies and television on DVD,and we try to hang out with friends as much as we can.

The covers of Crimespree are always very cool. Who designs them?

Ruth: Mary Reagan did the cover for our latest issue, but Jon is the man when it comes to our covers. I’m very proud of my husband; they get better and better.
Jon: From the beginning we wanted to avoid using pictures that people have already seen. Mark Billingham didn’t even flinch when I asked him for photos of him leaning on things. I inserted him into his own books like a bookend. So now each issue I try to out do myself. I really like the Vicki Hendricks skydiving cover. The cartoon Michael Connelly and Kent Krueger was also very fun; Jim Barker did a great job on the art.

You won the Anthony Award for Best Magazine at Bouchercon 2006. That’s got to feel good after slaving over a magazine all year?

Ruth: I felt like Veronica Mars at her high school graduation--only Kent Krueger and Jim Huang were my principal, how cool is that?

Jon: I was so nervous; I was sure we wouldn’t be the ones to win. The coolest part was how happy everyone was for us. Joe Konrath picked Ruth of the ground and twirled her. I couldn’t stop smiling for a week.

Every one of your issues is packed with diverse and interesting material. How do you go about choosing your content?

Ruth: Sometimes you choose the content and sometimes it chooses you. You get a great article and you want it to stand out. Or you’re at a mystery event and you realize, “ From this our issue will come.”

Jon: Some issues kind of fall into place in a funny way; we’ve had some with a lot of interviews, and some with just one. What we really want is things that everyone will enjoy reading, no matter what their taste in fiction is.

It seems you’ve met almost everyone in the mystery world. Was there a meeting that just blew you away? Someone you’d always wanted to encounter but never thought you would?

Ruth: the internet is not big enough for my list, but Crumley, wow. And I met Pronzini and Mueller at the end of a long convention and was speechless, literally said something like, “I love your work I’m so sorry I can’t do more right now.” They both laughed. Ed Gorman. Bill Deeck was the best. And of course the Todds, Rankin, and McDermid, who encouraged our codependency almost from the start… The best thing about Crimespree is we get to have moments, unbelievable moments, all the time. With authors, yes, but with fellow fans, no matter what their background. It validates our craziness and makes it so worthwhile.

Jon: You would think that after a while it would become old hat. Not true. Every convention I still have a t least one fan boy moment. In Toronto it was meeting Michael Slade, in June it was meeting William Link.

What are you reading now?

Ruth:I’m reading the new (Oct.)Archor Mayor, CHAT. I grew up in Vermont & never miss a book. I just finished HEAD GAMES by Craig McDonald and SECOND SHOT by Zoë Sharp. I can recommend them both.

Jon: I just re-read THE WATCHMEN by Alan Moore--pure genius. I also just read Tom Shreck ON THE ROPES, a great debut novel. I’m in the middle of Mark Billingham’s DEATH MESSAGE and Mike Carey’s THE DEVIL YOU KNOW.

Is there any reality about publishing a magazine that might surprise the average person?

Jon: There are a lot of phone calls involved; I had no idea how much time I would spend on the phone.

What do the Jordans have planned for the coming year?

Ruth: Six more issues of Crimespree, a couple of conventions, our annual mystery event with the Muskego Public Library and all Bouchercon, all the time! Love really is an endless mystery--or in our case, perhaps mystery is an endless love.

Jon: We’re also working on a Crimespree Cookbook, and I really hope to find time to do a second book of author interviews. I would like to learn how to nap.

Jon and Ruth, thanks again for chatting.
Posted by Julia Buckley at Tuesday, July 17, 2007

Thanks, Bill. How are all things Portland?

Wet. I did a lot of bragging last week in NYC about how Portland in the summer is dry, though sometimes hot, unlike its reputation, and also with very low humidity. Since I got home it's been rainy and cool with humidity in the 90th percentile. Bleh!

Thanks for doing the interview Julia.

The attention we are getting makes it much easier to sit down and do layout for the next issue!

My pleasure, Jon! It was fun.