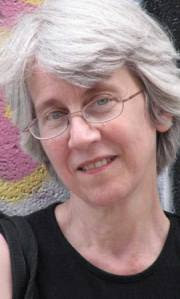 Barbara, your website is great! Did you design it yourself?
Thanks. It's pretty bare bones, but yes, I am into DIY. I use a free hosting service out of British Columbia, open sources software, and a minimal knowledge of html. I'll be working on a new design when I get the cover art for my new book - which I'm anxious to see.

Aside from being a much-praised author of mystery fiction—On Edge, which came out in 2002, and In the Wind, which debuts from St. Martins in 2008—you are an academic librarian. What do you do in your capacity as a librarian?
A bit of everything! I'm at a small liberal arts college, so there are only six librarians doing a lot - creating our website, building a collection of books and electronic resources, teaching students how to do research. I teach some courses and do a lot of workshops on doing research for everything from conservation biology to constitutional law.

Wow! Here's another library-oriented question: you're surrounded by books. What made you choose the mystery genre when you began to write for publication?
I've never wanted to write any other kind of fiction. I grew up with British golden age authors - my mother was a self-educated PhD in everything, largely because she was a voracious reader of mysteries. I got sidetracked by Russian literature, which became my college major, but rediscovered the genre when I read Dennis Lehane for the first time. He once said in an interview that crime fiction is where the social novel went, and I think it's true. Certainly, there's a lot of it that's purely entertainment, and there's nothing wrong with that, but there is also a lot of writing in the genre that engages serious issues with fine, exciting prose.

You were recently in Chicago, my home base. What did you do? What did you enjoy most? Tell me next time you're in town and we'll have lunch!
We lucked out in subletting a house in Hyde Park from a couple who were on sabbatical from the University of Chicago, so used that as a home base, then got a CTA pass and simply explored as many parts of the city as we could. You have to get into the neighborhoods to know Chicago. It's a great city - diverse, friendly, and endlessly fascinating.

What did I like best? The tamales at La Justicia in Little Village. Mmm.

Tamales are paradoxical: both sinful and heavenly. You spoke at a conference in Canada about “what libraries have in common with Chaos Theory.” Okay, I'll bite. What do they have in common? In twenty words or less. :)
Chaos theory examines the regular irregularity of complex systems using fractal geometry; libraries’ disordered order makes them fractal systems, QED. (Count 'em: twenty words!)

Both succinct and fascinating. You describe yourself as having “wide-ranging curiosity.” Would you say that this was a prerequisite for a writer of fiction?
Possibly. It sometimes makes it hard to concentrate, though!

Tell us a bit more about your books. What made you write On Edge? What's it about?
I got the idea for On Edge when driving through a nearby small town that was the site of a massive child abuse investigation in 1983-84, one that broke just weeks after the notorious McMartin Preschool case in California. For some odd reason, the country (indeed, the entire developed English-speaking world) was gripped for nearly a decade by the idea that our day care centers and small towns were home to secret Satanic cults that ritually abused children. One poll found about 70% of Americans believed at least some of these cases were true. A specialist in crimes against children at the FBI's Behavioral Sciences Unit studied over 300 such cases (including the one in the town near mine) and concluded none of them involved satanic ritual abuse - and that, in fact, investigations into genuine abuse were being hampered by this strange moral panic.

In the small town near me, nearly everyone was suspected of unspeakable acts; a police officer who objected to the conduct of the case was arrested along with his wife for being part of the secret ring of child abusers; eventually a trial was held in which a very confused five year old was put on the stand to testify against his parents using words he didn't even understand. It was heartbreaking and ended in a shambles, with two acquittals, dozens of dropped charges, and nobody official ever admitting they'd gotten it wrong.

So - I wondered what the long-term effects of that kind of communal trauma might be, and why fear becomes such a potent driving force in the formation of social issues. There's something so satisfying about having someone to blame for all those generalized anxieties you might have, though it's also very dangerous. On Edge uses the conventions of the thriller to explore that effect. And (I hope) tell an entertaining story, too.

That sounds fascinating! And very much like The Crucible (which was just chosen by Mayor Daley as Chicago's choice for its One Book, One Chicago program).

My next book, In the Wind, is quite different in tone - less dark and
violent, certainly - but in a way it's about the same issue. I was struck by the way the rhetoric of anxiety drove both the excesses of the counterintelligence activities during the Vietnam War era and the measures being taken in the "war against terror" now. If you read the Church Committee Report that called for reforms after Watergate and replace the word "communist" with "terrorist" it sounds exactly like what's going on today. It's scary. And - of course! - that makes it material for a mystery.

But there are some interesting parallels there between the novels. Your new book is being published 6 years after your first; did it take you that long to write it?
No. I spent most of that time trying to write a sequel to On Edge that would satisfy the publisher after my original editor left. It didn't work out. A couple of years ago I started this new book and luckily St. Martin's was interested. I hope the sequel I'm working on now will make them happy!

The top of your blog is a graffiti design. Are you into the whole urban art/ tagging scene?
There's a character in In the Wind who is a tagger. I know some taggers and love good urban art - Banksy is amazing, and I took a lot of pictures of interesting street art in Chicago that is mostly on "permission walls" - places where people can do graffiti legally. Pilsen and Little Village are also full of amazing murals, some of which remind me of the political mural tradition in Guadalajara. On the other hand, I was not at all happy about the lame gang tags that some idiot wannabes sprayed on our home while we were in Chicago! That stuff's just ugliness looking for trouble. We live in an old fire station in the center of our small town, and while there really isn't a gang presence here, there are kids who wished they belonged to something. I just wish they were more artistic, the little scoundrels.

Interesting--that could be a conversation all by itself. And living in a fire station! That is a very distinctive detail!

You were born in Madison, Wisconsin, a lovely Midwestern town that hosted last year's Bouchercon. Now you're in Minnesota. Do you ever visit Madison? Do you miss it?
I have family there who tell me I don't visit enough! It's a great small city with a world-class university surrounded by lakes. What's not to love?

Eugen Weber of the Los Angeles Times says that /On Edge/ offers up “more psychos than should be allowed in any loony-toon town.” What made you want to write a mystery brim-full of psychos?
He must not be from a small town. I didn't really notice until he pointed it out. Admittedly, the narrator's a bit deranged, but he's from Chicago, so...

You've lived in the Middle East. Where? What was your experience there?
In the 1980s I lived in Riyadh, Saudi Arabia for two years and Algeria for one. Saudi is a strange place - at the time full of foreign workers, isolationist but being developed from a desert society to a modern infrastructure practically overnight, and dominated by a very strict and (to me) joyless version of Islam, with a tense balancing act going on between an absolute monarchy and religious authorities. Algeria is beautiful and poor and socialist, trying to provide universal education and health care but terribly scarred by colonialism and the revolution and recently torn up by a new strain of fundamentalism that is not really Algerian at all. One thing I learned from those two places it that there is no such thing as "the Arab world." There are lots of them, and many different ways to be an observant Muslim.

Such a good point, Barbara. You've also lived in Kentucky, Texas, Africa, Maine. Do you have a favorite place?
Boy, that's a tough one. I have to admit I really enjoyed the times I sublet apartments in Manhattan and in Chicago. Guess I'm a city girl,at least so long as I live in a small town!

What are you reading now? Do you, as a librarian, suffer from the “so many books, so little time” syndrome?
Not so much as a librarian - college libraries are full of books that are good for research but otherwise utterly untempting - but thanks to the 4MA reading group I'm involved in online I have a huge list of books I want to read. That doesn't bother me, though - I love never have that "I'm not sure what to read next" feeling. I'm just about to pick up Tana French's In the Woods.

Fall is coming; how will you celebrate autumn in Minnesota?
There's a county park near us that is beautiful when the leaves turn. We usually go there to walk to the top of the hill and bask in all the colors. Not all that exciting, but it is my favorite season.

Sounds great to me! Thanks for chatting with me, Barbara!
Thanks for asking!
Posted by Julia Buckley at Thursday, September 20, 2007

Barbara, have you read Yasmina Khadra's crime novels set in Algeria?
==============
Detectives Beyond Borders
"Because Murder Is More Fun Away From Home"
http://www.detectivesbeyondborders.blogspot.com/

Thanks for reminding me of Yasmina Khadra. I did pick one up once, but must have been in a distractable mood because I had trouble focusing on it. (No doubt my problem, not the author's. Though I will say, the other Algerian author I've read and loved is Assia Djebar, and she's not exactly a get-straight-to-the-point kind of narrator, either. You have to work a bit to figure out what's going on.)

I'll give it another go. I don't know of any other Algerian crime fiction writers who have been translated into English.