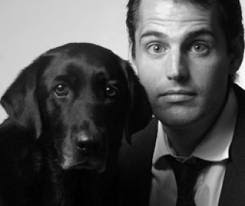 J.F., thanks for agreeing to chat about your writing.

Your book, A Dog About Town, is narrated by a black Labrador Retriever who happens to be incredibly intelligent. What made you decide to write a book narrated by a dog? Was it influenced by the Labrador with which you are pictured in the back of the book? :)

A Dog About Town –specifically, Randolph, the pudgy Labrador Retriever, who narrates the book— sprang into life basically complete. His voice was quite distinct and he definitely had a story to tell. It was my job to listen. Was it influenced by R. Englert, the dog I’m pictured with at the back of the book? Yes. To the extent that R. Englert introduced me to the ways of dog in New York City then it was influenced by my experience with her. But this is more a reporting concern. On another level, I’m hesitant to draw too many comparisons between Randolph and R. Englert, since the former is a male and has distinct –sometimes objectionable— opinions about things and R. Englert is a female and is never objectionable in her opinions about anything

The narrator, Randolph, lives in a New York apartment with a man named Harry, and both man and dog are suffering from the loss of their loved one, Imogen. I have two literary questions:

First, is Imogen inspired by Shakespeare’s Imogen, daughter of King Cymbeline? If so, can we take that play as a clue to the lost Imogen’s whereabouts?
You are an excellent reader and I am very impressed. In terms of using Shakespeare as a decoder key though for the larger, ongoing mystery, I would be careful. As many a spy and code breaker will tell you, certain landscapes are a wilderness of mirrors and there is seldom a pristine and perfect guide to sorting out the muddle of a mystery. This particular mystery I fear will see Harry and Randolph caught in several dizzying wildernesses around the globe before it is over with Imogen always before them in the ungraspable, middle distance as a living beacon (or not) … .

Okay. Second, I am reminded for some reason of Poe’s “lost Lenore,” perhaps because of the men brooding in their apartment at midnight over the missing woman and the fearful question of what might have happened to her:

“vainly I had sought to borrow
From my books surcease of sorrow — sorrow for the lost Lenore —
For the rare and radiant maiden whom the angels name Lenore —
Nameless here for evermore.

And Randolph is of course reading a book in chapter one. He also says that Imogen “had made better males of us both” and that “men need to be loved or they will slowly and invariably go bad.” Harry has sought occultists to help him find Imogen, and Poe’s narrator is reading a book about the occult (at midnight!).

Am I imagining the Poe influence here?
Poe certainly matters to me (as he should to any halfway serious reader or writer). And I tend to think that unless we are desperate doctoral students trying to stamp our bit of arcana on the literary map our instincts about influences are seldom unfounded. Here, though, I confess to not being conscious of this influence, but Randolph, my co-writer, that clever old sod, probably has a different idea. 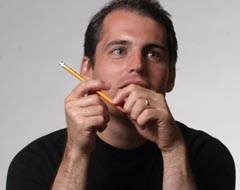 Okay, that was a long question, so here’s a short one: is writing your full time job?
Yes, when I’m not selling Randolph’s signature collection amethyst dog bangles on the Home Shopping Network to feed his insatiable appetite for spare ribs. Would you like to buy one?

No, thanks. Do you intend to write a whole series of Randolph mysteries?
Randolph insists on it, although he claims that I’m the one who won’t let him find their Imogen and save all from imminent harm so that they can nestle once again as a family in their sun-dappled apartment on the Upper West Side of Manhattan.

Do you get fan mail from dog lovers?
I have gotten some wonderful mail from dog lovers who have found A Dog About Town and have become attached to Randolph. One woman will be baking nonfictional, organic treats for him which he is sure to enjoy. People in Italy where the book has come out in glorious hardcover under the name Elementare, Randolph are excited because of Randolph’s affection for Dante and his general love of food. The response has been exceedingly positive to Randolph … overwhelming in a way and by overwhelming I mean overwhelming for me in that it has confirmed what I first sensed when I “heard” his voice beginning to tell me, his rather dense typist, a story and a little bit about life (both human and dog).

I love the Italian title.

You went to the Columbia School of Journalism. Have you worked as a journalist?
Not as a daily journalist but some magazine work including one assignment that saw me kayak around Manhattan in the dead of winter in hypothermically lethal waters. Something in the final scene of A Dog Among Diplomats and future books has been gleaned from these reckless inquiries. There is something about floating in New York harbor with a dry suit on that alters your perception of the world.


I would imagine. Do you read mysteries? If so, do you have favorites?
I am still working my way through the classics, mystery and other. We pigeonhole ourselves too easily these days I think. Perhaps we do this in the absence of a sense of belonging that an earlier civilization or society once provided. We claim our niche like it’s a feudal village. Who knows? I hold with the highbrows and the snobs without being willfully exclusionary like them. I believe that everyone should want to challenge themselves, push themselves and be more than occasionally uncomfortable in their reading and in their lives. There’s nothing I think will hurt a writer more than to believe that a reader won’t stick with him or her through the “difficult” and “complex” parts or give up because of a handful of “big” words. Our potential audience should be everyone if we’re going to write anything good and everyone should have pride and curiosity enough to try to get a little bit better even when they’re being entertained. This is a long way of saying, I don’t think genre beyond the basics: nonfiction, fiction and verse.

What are you reading now?
The Economist. I have a subscription because I believe that The Economist is so good that if I could only manage to read through it every week I could actually see far into the future. It comes to my mailbox every Friday and so far I’m not seeing past the following Tuesday but I’ll keep reading and running to the dictionary or Wikipedia when they throw the occasional stumper my direction.

You currently reside in New York. Have you always lived there?
I was born in New York but then we moved to Staten Island which is a whole other story about which Randolph will have no part in the telling.

I love the cover of your book. Were you happy with it when you saw it for the first time?
I think it’s brilliant and, as you suggest, I had nothing to do with it. I had some sense that there should be a dog on the cover, but I was as close to ecstatic as I get when I saw what Daniel Craig did with it (I was further amazed when Randolph –whose information about such things is beyond reproach— told me that this same man is the current James Bond on the silver screen). 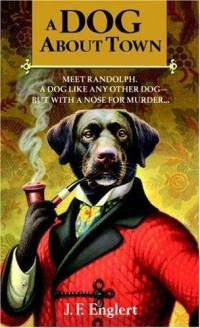 He is indeed multi-talented! :) How can readers find out more about you and your books?

Thanks so much, J. F..
Thank you, Julia! This has been a terrific experience and your insights have left Randolph and me immensely impressed and gratified.
Posted by Julia Buckley at Sunday, March 09, 2008

V. interesting read for someone always on the look for new things to read, but I was left completely baffled by Daniel Craig's appearance... What on earth did he do with the cover/book?

Well, Jonathan can correct me if I'm wrong, but I think it was a different man named Daniel Craig, and we were just cracking some jokes about the similarity. :)

Ach, I see the light! Thank you, now I will be able to sleep tonight ;-)

Ms. Buckley, it's been so long since the third Randolph mystery came out, I'm wondering if there will be any more.

Any chance you can find out?

The aspects of the statement of purpose master degree are showing a good effort. Maybe I will take this service. I have a high ambitious to study in abroad. Perhaps it will help me to meet my goal. reference forgetting important info about it.

Summarizing of an article is not hard at all. But to ensure its quality need some proper guidelines. This page assists me to get valid rules and regulations. By abiding this rule I will summarize my article. Hope I will get positive feedback from the audience. http://www.rewordtool.net/choose-our-best-rewording-generator/ to explore for more information this is badly needed for you.

If personal statement length is longer that doesn't meet the quality it will not fruitful. Sometimes selectors said to use limited words. The free tool of this service is really appreciable. It is so fast and reliable. www.originalitychecker.net/copy-checker here is the link for further details to get help.

Such a decent data you imparted to theirs, Regardless, on the off chance that the association fortify those understudies who have some cash related issues, they can visit site by direction as his own unique craving.