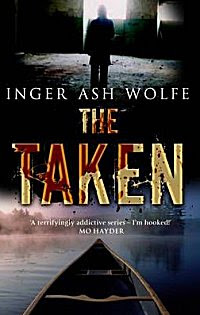 Inger Ashe Wolfe is a pseudonym used by a renowned Canadian writer. THE TAKEN is the second in the Hazel Micallef mystery series.

Inger, thanks for chatting on my blog. I’m curious about the name Hazel Micallef; even in the book people mispronounce it, and Hazel corrects them (and, in the process, the reader who might have gotten it wrong). How did you choose this distinctive name?

Names are hard! I chose Hazel’s first name easily—she just struck me as a Hazel from the get-go. The name suggests hardness and intelligence to me (a hard-won kind of wisdom, too), but there’s also something lonesome and soft about the name too. The last name was more calculated: it’s originally a Maltese name that spread across the globe and is found especially in British Isles. You find it in Wales and Scotland now, tough places to prosper. So the last name also suggests a hardness I like. I like, also, that it means “judge” in Maltese.

Hazel pleases me because she’s a female cop who possesses qualities that mystery fiction usually only bestows on male cops: she’s older, divorced, lonely, battling a physical ailment, tied to her job despite its miseries. This seems realistic, yet few of mystery’s female heroes are allowed to be old. Were you consciously trying to address this double standard when you created Hazel?

Well, there is Miss Marple, and Jane Tennison is in her forties, but yes, there are few female detectives in their sixties in continuing series like this one. I wasn’t trying to right a wrong when I created Hazel, but I did hope she would feel new to readers. Also, breaking away from the template of who detectives tend to be in modern crime fiction, I thought I’d feel more freedom to innovate, and I do.

Yes! In the prologue, a nameless person reflects upon suicides, and the distinctive way that they dress themselves for death. Is this a well-known truth, or is it simply a fictional reflection of one individual?

It’s a fictional reflection, although I also know it happens.

Absolutely. People will use whatever is at hand to beat the odds, and criminals are especially savvy in this regard. Technology introduces new challenges to both the detection and resolution of criminal activity. Stealing money without entering a bank or a private home? Sounds good. Communicating anonymously with either your victim or your co-conspirators? Much safer. Modern law enforcement is dealing more and more with ghosts and it takes considerable effort to stay one step ahead of them.

There is an obvious prejudice against Hazel’s more rural police force in Fort Dundas when she visits the 21st Division, where Superintendent Ilunga suggests they should “return to fining people who have too many trout in their coolers.” On the one hand, this seems like the basic distrust one law enforcement group may have for another; but I’m wondering if there’s something distinctly Canadian in this particular clash of forces?

Well, I want to be careful here. Ilunga is fictional, as is the entire Port Dundas OPS attachment. (And the OPS is fictional, too.) Is there an urban/rural divide in general in Canada? Yes. So it’s not a stretch to consider that it might exist within different police forces, too. But The Taken is not meant as an exposé of the thoughtlessness of Toronto police, nor is it a condemnation of anyone or any institution. But to make it believable, it had to be written in terms that, particularly, Canadian readers could identify with. The conflict with Ilunga and his division is entirely plausible. But would it have panned out the way it did in The Taken? It’s highly unlikely.

Cops are no different than anyone else, except that playing a very public role, the public tend to believe that they’re not like everyone else. But the stresses of home and the stresses of work take their toll on cops just as they do on you and me. With Hazel, these stresses are perhaps a bit more literary than they are in life, but I think they resonate fairly accurately.

In some ways, Hazel puts me in mind of Linda La Plante’s DCI Jane Tennison (to whom you alluded earlier), except that Hazel’s subordinates are more accepting of her authority. In THE TAKEN, I don’t get the sense that Hazel’s gender is a problem for men on her staff; will this be different in other books?

I think it’s a possibility, but I don’t want to get too deep into that territory because it strikes me as being too easy. Also, after two books, I think I’ve established pretty firmly that if someone tries to put Hazel “in her place,” they’re in for a blast of reality. She’s not the kind of person to even take part in that dynamic. If she meets someone with those attitudes, Hazel’s more likely to do an end-run around them than she is to engage with them (although they’ll know in short order what she thinks of them).

Hurrah for Hazel! Will there be more books in the Hazel Micallef series?

As of this writing, I’m planning the series to be between ten and a dozen books. Inger Ash Wolfe may write other books as well.

One of my favorite scenes with Hazel involves her doing something that an action hero would do in some blockbuster movie—except that it doesn’t seem unrealistic, tied as it is to what she does and to the particular criminal she is tracking. Does Hazel’s heroism emerge from a desire to do her job, or from the basic morality of her nature?

Hazel is, at base, a fighter. She will do what it takes to get the outcome she wants, even if it means bending the rules, risking her neck, or pissing off someone she cares about. She cannot stomach failure, which is why the end of her marriage and the breaking down of her body drives her as crazy as it does. So yes, she’s doing her job, and her nature is basically moral, but Hazel is mostly driven by the urge to win, and because she sees her role in her community as an inalienably moral one, she allows herself all kinds of leeway in how she gets her results.

I like the relationship between Hazel and Wingate. Does she view him as the son she doesn’t have?

Some parts of this book read like horror fiction. Are you a fan of the horror genre?

Not really. I’ve read some of it, but I don’t like horror divorced from its human roots. The things people are capable of doing to each other deserve to be shown in fiction in a completely honest and realistic way. I don’t need vampires and telepaths to help me grasp how deep human cruelty can go. The horror in my books are intended to show how significant the stakes are in solving the crime, not to disgust or titillate.

At one point Hazel requests a “peameal bacon sandwich.” This sounds delicious, but I’ve never heard of it before. What is it? Can I get it in America?

Ask for “Canadian bacon”. It’s unsmoked back bacon that’s been rolled in cornmeal (altho it used to be rolled in peameal.)

In your own reading of mysteries, which novels were most influential?

Well, this is a hard question. I go for character over plot, although I have been known to gobble down potboilers. My main touchstones are Patricia Highsmith, Henning Mankell, Ruth Rendell, P. D. James, Richard Stark (and the rest of Westlake, but I adore Parker), Elmore Leonard, James Ellroy, the Martin Beck books, Ed McBain, and early Thomas Harris. I dip in and out of the pocketbooks just for fun—Lee Child, Michael Connelly, Mo Hayder and company.

A stellar group. What are you reading now?

Just finished Found in the Street, one of the Highsmiths I missed, and I’m reading Ian McEwan’s new novel, Solar, and finding it absolutely hilarious.

There has been some controversy about your pseudonym, Inger Ash Wolfe, and the name of Danish crime writer Inger Wolf. Do you think that the name similarity will continue to be a problem in the way that it was for John D. MacDonald and John Ross MacDonald (who eventually became Ross MacDonald)?

It was made into a problem; it never was one. I’m glad we distinguished my eventual pseudonym from Ms. Wolf’s, and she was very gracious and undistressed about the whole thing, but there has never been any confusion or conflict apart from that which was created in the media prior to the publication of The Calling.

Thank you so much for chatting with me, Inger!

Sorry to say that Inger Ash Wolfe got the name of her detective wrong. Although Maltese and very common in Ontario wherever Maltese are found, it does not mean judge in Malti. The word for judge is mħallef (that's an h with a stroke through it) in which the h is sounded. A far cry from Micallef.

I pointed out in my June 2009 review of The Calling that the name wa Maltese. Sadly the review has now been moved into our archives but can still be partially seen with the Maltese reference at www.lancetteer.com/Archives_Books_fiction_Taken&Calling.htm

Hi, Julia. Found this terrific interview doing some background reading before I start The Calling. I'm a huge Highsmith fan--it's always fun to look for influences in novels. Thanks!

Actually he wasnt wrong at all. In Maltese Micallef derives from the word Mhallef (judge). My surname is Micallef and I am Maltese and this is renown here in Malta.