INTERVIEW: Lou Allin Chats from as North as She Can Be 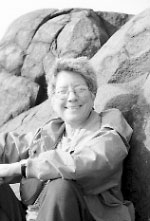 Hello, Lou. You are a citizen of both Canada and the U.S. and your website says you “sing two anthems.” Do you know all the words to both anthems? Because there are plenty of citizens who don’t even know the words to one.
I not only know both anthems, I know other patriotic songs such as “God Bless America” and “Yankee Doodle Dandy” and sing them on a regular basis as I roam the bush. It’s much better than ringing bells constantly to warn away the bears. Being alert is the key to staying alive when the snow’s not on the ground and Bruna and Bruno are out of their dens.

Your website says that you finally headed to Canada from Cleveland, traveling “farther north than [you] believed people lived.” Why did you travel that far?
I was unlucky enough to graduate with a Ph.D. in 1975, the year every university had hired every professor it would need until 2000 (and told me so in replies to my applications). After two fruitless years of job searching, I found out I had retained my Canadian citizenship and shotgunned their post-secondary institutions. Cambrian College, 250 miles north of Toronto, had a full-time, permanent opening. I thought I had gone to heaven when I saw the Superstack of the Nickel Capital.

You are in the Boreal Forest of Ontario. Is this where your mysteries take place?
Much of Canada is Boreal Forest, and Northern Ontario is no exception. Many scenes in my books take place around my home on a 64 square mile meteor-crater lake north of Sudbury. Semi-protected Crown land backs the property, which gives my sleuth room to roam where not many people have been before. Moose, bear, wolves, and the occasional deer or lynx can be found there.

You have a Ph.D in Renaissance Literature. What’s your favorite Shakespearean play? Do you have a favorite Renaissance writer?
Though A Midsummer Night’s Dream intrigues me, especially the original with James Cagney, at my advancing age, The Tempest seems appropriate. I’ve always loved the atavistic innocence of Caliban. My dissertation was on Christopher Marlowe, the bad-boy dramatist cum spy who preceded Shakespeare and died very young, at the hand of an assassin, some say. Despite its truncated state, I revel in Dr. Faustus. Selling your soul for earthly treasures is a timeless theme and the breathless pace at the end with Faustus shrieking out for divine help makes me recall Burton in the part.

Tell us about Bush Poodles are Murder. (Is this your latest?)
Bush Poodles Are Murder appeared in 2003 and features my realtor sleuth Belle Palmer saddled with an obnoxious and spoiled mini-poodle. The poodle’s owner, and Belle associate at work, has been charged with murdering her lover, a con artist.

Just out is Murder, Eh? Belle is showing the lakefront mansion of a prominent businesswoman when she discovers the lady strangled in her bathtub. Could this third break-and-enter death reveal a serial killer at large? The woman’s only child, a precocious twelve-year-old, comes to stay with Belle and wins her heart. Then after an argument, the boy disappears. Racing against time as fall temperatures plummet, Belle joins the search, chased by murderers who will stop at nothing to protect a multi-million-dollar criminal empire.

Do you have another mystery in the works?
I have a completed mystery novel set in Utah, which I’m shopping. It just received a thwacking from Poisoned Pen Press. One of their screeners didn’t like the characters and called the writing “schoolmarmish,” “needs a vacation.” Ouch. I do the same screening process for them, so maybe the payback is deserved. For Man Corn Murders, I used a younger sleuth, a reporter from Cleveland, and incorporated information from my travels out there in red-rock country scouting for Anasazi ruins.

For 2007, RendezVous Press will bring out Enemy of the People, which carries an environmental theme as reflected in the title borrowed from Ibsen. It’s appropriate for Sudbury, which became an ecological disaster area from the 1870s into the next hundred years. Many of the trees were cut to send to Chicago after the fire, and then the nickel smelting destroyed the rest of the landscape in the core area the size of New York City. Nothing but black rock, where the astronauts came to train. Fortunately, a civic, government, and private effort of regreening in the last twenty-five years has brought back the grass and pines and earned the city an award at an Earth Summit. Over twenty millions seedlings have been planted, and the blueberries have never been happier.

What got you started in the mystery genre?
I’ve always liked reading mysteries, Agatha and Rex for starters. When I moved to a cottage on this lake and was free of TV, I started devouring ten or more on a weekend, then said to myself what many do, “I can write stuff as bad as this!” It’s a familiar story.

You also teach, among other things, grammar. Do Canadians have better grammar than Americans? I’m trying to start a controversy of international proportions.
Argh. I wouldn’t think so. Things are bad all over. The barbarians have stormed the ramparts. Is civilization any the worse for it? Certain fine points in grammar have become barometers for snobs. If communication is clear, what’s the problem? English is a very new language and hasn’t streamlined itself like Mandarin, where there are no tenses, only time indicators. Now that’s progress. Manners are more important than grammar. The man who sold me my RV says “youse,” but he’s a gentleman and gave me a fair deal. I respect that.

Good point. You’ve put it all in perspective.

You have a German Shepherd named Nikon, and he had a predecessor who was also a German Shepherd, named Freya. Is this a favorite breed? Or are Shepherds just popular in the Boreal Forest?
GSDs, when well-bred (which is rare lately) are fine companions, intelligent, hardy to the cold, and loyal. They’re not that prevalent in the Nickel Capital, except for the cross-bred junkyard variety. Freya, much the superior dog, had German lines and was born to work. Nikon, from an American line, is much more laid-back, read lazy, and thinks he knows best. On the other hand, Freya liked other dogs but suspected people. Nick is the opposite, especially when he thinks he must protect His Girl Friday, the mini-poodle. Enough said about that noisy little terror, except that she’s perpetually happy and doesn’t hold a grudge.

Where can your fans find out more about your books?
My website is www.louallin.com Now that I’ve traveling, I can be reached en route to Vancouver Island at louallin@hotmail.com

You sound very outdoorsy, and you teach. When do you find time to write?
The dog’s need for exercise and the distance from town keep me away from all but the most pressing social activities. I have no kids, other than furry, and no family, so time is generous. Before I retired from Cambrian College in 2005, I wrote on weekends, edited before bed, and could produce a book every two years. Now that I’m retired, the pace can be faster. Still, one a year is an ideal rate for me.

You are in “debt to Ted Turner.” Should we assume you owe him money, or are you grateful for colorization?
When I began the books ten years ago, the eight-foot-satellite dish on my dock was the only source of television. My sleuth, being cheap, subscribes only to TNT on a grey market arrangement (secret fake US ID) since Canadians are not allowed to buy Direct TV. One of her loves is classic films.

Your Dad “followed the film business to Cleveland.” What did he do?
My father (also in the book as Belle’s) was a movie booker. Twice a week we saw unreleased films in a private theatre. Of course I got passes to all the shows in town. How’s that for a dream childhood? Many stars passed through the office, and he brought me signed glossies. Only after I recognized the handwriting did I realize that he was signing Elvis’s pictures himself. Sweet, though.

If you could go to any country that wasn’t the Canada or the U.S.—let’s say you could end up singing a third anthem—where would it be?
In my desperate job search in 1975, I interviewed for a high school job in New South Wales and would have been thrilled to go to Australia. At the last minute, they found they had too many English teachers. Tough going, mate.

Thanks for your wonderful answers, Lou.
Posted by Julia Buckley at Thursday, July 13, 2006

Obnoxious and spoiled mini-poodle? Not possible!

Well, okay, spoiled, sure. But obnoxious?!

Are you speaking as a mini poodle expert? And may we assume yours is spoiled?

Aye, she is spoiled. But otherwise perfect in every way.