Vicki Delany on Choosing Titles, Living in South Africa, and That All-Important Cup of Writer's Tea 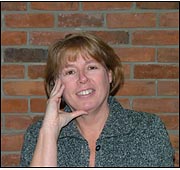 Your biography says that you are the mother of “three high-spirited daughters.” In mother code that can either mean that they were fun, or they drove you nuts. Or was it a little of both?
Both, definitely both. They are all adults now, and a nicer, more down to earth, competent group of young women would be difficult to find.

You say that you “quit Carleton University in a huff, in the middle of [your] final year.” What happened? Why the huff?
Secrets shall be kept. The only significance of quitting university was that I went traveling and ended up living in South Africa for eleven years before coming back to Canada.

Your titles are great: Scare the Light Away, Burden of Memory, Whiteout. (And Golddigger, coming soon). How do you come up with them? What comes first, the title or the book idea?
Titles are very important, I believe, as are covers. A bad cover and dull title can cause .readers to dismiss a book out of hand. Each of my titles has been arrived at completely differently. As soon as I wrote the sentence about the dog snapping at the light from the flashlight trying to “scare the light away,” I knew it would be the title. In retrospect that might not be such a good title; meeting people at bookstores I’ve had quite a number say something like: Oh, I wouldn’t like that, I don’t like horror. Whereas the title is supposed to reflect the character being afraid to shine the light on her past. For Burden of Memory, I struggled long after the manuscript was finished to come up with a good title using the word memory, because the book is very much about the effects of the past haunting the present. Perhaps I was subconsciously thinking of Anita Shreve’s Weight of Water, which I think is a wonderful title, because I was also thinking of using Weight of Memory. My next book is titled Child of Mine, and I had that title before I wrote a word. As soon as I formed the concept of the book – lost children – I knew the title. So it’s all different. And always exciting!

You are a Canadian, and critics have lauded your sense of setting. Do you appreciate Canada more now that you’ve written about it?
I can’t say that writing has given me many insights into or appreciation of Canada, no. I lived outside of Canada for eleven years, and that is what made me really appreciate it!

After you left college you went to South Africa and met the man you were to marry. Do you ever feel a sense of destiny in looking back at your life’s events?
I can’t say I do. I seem to stumble from one situation to another. I do believe in luck – I’ve always believed that I’m lucky. And I have been.

Of South Africa you have said that it “gave [you] an insight into to the politics of power and oppression that few Canadians get to experience.” Can you expand slightly?
We lived a nice, normal middle class life in South Africa, just as I had been used to in Canada, but there was also this strange feeling of being one of the upper classes. Not only in the sense of having servants, but knowing that you were more important (by which I mean considered to be a person of more value) than the majority of the people around you. I knew that wasn’t right, and there was also the uncertainty of living in a sea of people who might someday rise up against you. That worry was always there, usually in the very back of my mind, about what might happen in terms of an uprising or revolution. On the other hand, as a woman, I lived under more restrictions than my Canadian or American contemporaries. South Africa was a good twenty or more years behind the times, in those days a woman couldn’t open a bank account without her husband’s permission; pay scales were clearly identified as “Male” or “Female”. (Guess which one paid less). Politically, I am very left, what the Americans would call a Liberal and what I saw in South Africa – how casual oppression leads to violence and counter-violence, thoughtless stereotyping, minor cruelty, just because one can, religious justification for any sort of prejudice- has a lot to do with that. .

You describe your writing desk, at least in the beginning, as a place with a cup of tea and a candle. Did you write longhand?
My cup of tea and the candle were always sitting beside my computer. I wrote a few silly stories when I was in high school on a typewriter, but all my adult work as been on a computer. I can’t imagine writing longhand; I get a cramp scribbling a shopping list. The candle is just for mood.

What is it that attracts you to the mystery genre?
I read mysteries overwhelmingly, so naturally that’s what I want to write. What attracts me? Hard to say. In many ways mysteries strike at the heart of a community in ways that mainstream novels don’t. I like stories with a strong sense of place, and mysteries are very good at that. I like fairly dark, serious books. As a writer, I enjoy the Canadian mystery community very much. I’m a member of Crime Writers of Canada and sisters in crime and I need that support.

Who are a few of your mystery writing inspirations?
Right now, I love Susan Hill’s Simon Serailler books. She is really turning the genre upside down. Robert Goddard’s one of my favorites, and so prolific. Giles Blunt has done a lot to make Canadian crime novels appealing to a wider audience. In Burden of Memory I went a bit outside the conventional suspense genre with a ghostly subplot, and Carol Goodman was an inspiration to me to attempt that. I like English police procedurals very much, Peter Robinson, Ian Rankin, Jill McGown etc. but I don’t think my work is at all similar to theirs. Although I have an idea for a police procedural in the back of my mind.

Is it difficult to promote your books when you also have to work eight hours a day?
Most certainly.

Aside from South Africa, have you visited other countries? What’s one you’d love to visit?
I’ve traveled a fair amount, but only through Africa, and what’s called “the West.” I’ve always wanted to go to Russia – I took Russian history at university and to go there has been my dream ever since those days.

How are you enjoying your group blog, Type M for Murder?
It’s lots of fun. We’ve put together a really great group of mystery writers and we’re taking a casual approach to the blog – we’ll write when we have something to say. Readers can find it at http://typem4murder.blogspot.com

Will you be at Bouchercon? How can Vicki Delany fans find out more about her?
I’m not planning to go to Bouchercon this year. I was dithering about it, and now I hear that all the hotel rooms are taken. I intend to go next year to Anchorage, and I’m going to book early. I plan to retire in February (very, very early retirement, I hasten to add) and I hope to hit the road for a big U.S. book tour in the spring or fall. My web page, www.vickidelany.com, has a calendar of my events, so please check it out. I’ll probably be talking a lot about my plans on the blog as they develop.

The gaming class of bewilder games has also watched the lots of assortments and it is in like manner being created. The one which I was used to play was jigsaw jumbles around the start and now I am playing altogether progressively tangled games. go here

Central purposes of herbs for being utilized in the restorative purposes has been shown by the science. Herbs are likewise being utilized for the cooking purposes comparatively as in creation of standard tea. We ought to overhaul the utilization of herbs now. official site

Wow! I just love reading the crime and suspense novels. I am really looking forward to read all those books. Students ought to explore more about content writing. such books help me in my practical life and I really learn useful lessons.

It is not an easy job to choose the titles either you are writing book, essay or assignment. It is considered important part of the document and Vicky guided here beautifully how to choose the perfect titles. Get suggestions about the from this source about content writing. I read his answers and he make responded in pretty great way.