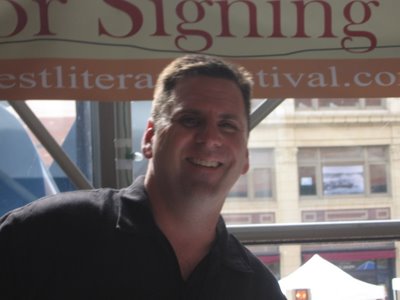 Steve, thanks for talking with me.

You are currently an ad man by day and a writer by night; a sort of author superhero. Your site says that, as an advertising executive, you are good at getting people to buy what they don’t really need. So, what should I buy that I don’t need?
My novel, Another Lost Angel. Not only is it a damn good read, but it’s chock full of minerals and nutrients and contains the recommended daily allowance of riboflavin. It’s also rumored to have strange healing powers.

Sold! You were a Communications and Theatre Major at U of I Chicago, but “the theatre part was “never really [your] thing.” So why major in theatre? Does that experience help you now as you sell your books?
Well, the University was adamant about keeping the ‘and Theatre’ as part of the major, even though a whopping 100% of the students involved taking the major just wanted to Communicate and thought Ibsen was a small country in Bavaria. And while taking the ‘and Theatre’ classes has not helped me sell books, it has helped me land the role of Luisa Bellamy in a Broadway revival of ‘The Fantasticks’

Congrats, Luisa. :) Your dad, who worked in the Sheriff’s Department, talked you out of Law Enforcement as a career. Why?
He honestly thought that being a cop in Chicago was too dangerous. Obviously he had no idea about the kind of maniacs you run across in advertising. Give me an axe-wielding psychopath over a know-it-all client any day. Seriously though, I followed his wishes and regret it. I would’ve loved being a cop. And not just for the shooting people part of the job.

You list among your influences the late Eugene Izzi. So as a mystery writer, what’s your theory about Eugene Izzi’s death? Suicide, murder, or accident?
Wow, I don’t think there’s space to answer this sufficiently! Short answer, Izzi is the reason I became a writer. So as this huge Uber-Fan, I’d like to think it was something other than suicide. For a long time, I believed that he was possibly trying to act out a scene and it was an accident. However, I’ve heard from very reliable sources who were at the scene that Izzi did in fact take his own life.

Okay, now let’s talk about you as a writer. Another Lost Angel has gotten great reviews, as has your protagonist, Linny Nomar. How did you come up with that name, first of all?
Nomar comes from one of my favorite ball players, Nomar Garciaparra. Linny from the name Lincoln, as in Lincoln Full, partner and best friend to Linny’s father Ray, and eventually the man who raised Linny after Ray and his wife were killed in a car wreck. 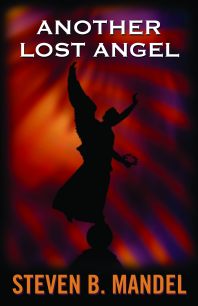 What’s the premise of Angel? How did the idea come to you?
Angel is really a tale of redemption, It’s about a cop who has been numbed into apathy after a string of personal tragedies. He’s been working for the Chicago Outfit for a number of years and is content to be their puppet. That is until they order him to do something that shakes him out of his stupor and sends him on a mission to find the good guy he used to be.

You write about a tough and crime-filled world, but you live in a house full of females: a wife and three daughters. Is your writing ever an escape into a more testosterone-filled environment?
You would think, considering that my home life is a steady stream of princesses and ponies. Yet the truth is, while I think I write some damn good male-oriented murder and mayhem, my constant exposure to the XX chromosome has helped with writing more believable women.

In music, you like “jazz, blues, classical and Springsteen.” An interesting combination. :) Do you listen to Dick Buckley’s jazz show on WBEZ?
Yes I do. I also listen to 90.9 WDCB. It’s a phenomenal station. Not that light jazz stuff, but guys like Miles Davis, Bill Evans, Woody Shaw, Charlie Parker. It’s cool, man, cool. By the way, yesterday (9/23) was Springsteen’s birthday. Happy 57th, dude.

You are a White Sox fan. My husband says I should ask you why.
:) Yikes! Another question that would take volumes to fill! It’s easier to explain why I’m not a Cubs fan anymore. Simply put, 1984 & 2003. I also think that until people stop filling up Wrigley for every game, the Cubs have no incentive to put a winning team on the field. That said, Go Sox! (though sadly as of this writing, the boys are on the edge of elimination from post-season play.)

What are you writing now?
I have one book that’s waiting release, LITTLE HERO. I’ve just finished one called BLOOD IN, BLOOD OUT, and I’m plotting a book called MY BEAUTIFUL REWARD while writing YOU ARE MY GOD, I AM YOUR GUN.

That's a very interesting title, that last one. Do you find time to read? What are you reading now?
I’m just about to start 1776 by David McCullough and Gun Monkeys by Victor Gischler. And that’s pretty much my groove right now, mysteries and historical non-fiction. I’ve recently devoured everything Stephen Ambrose has written on WW2 and will probably soon go back and read Band of Brothers for a 3rd time.

We were recently on a couple of panels together, and you said that when you first got published you had the preconceived notion that it would bring you instant fame, and that when you left the house “trumpets would play.” In what way has being published changed your life?
The trumpets I heard actually turned out to be the stuck horn of a 1983 Ford Fairmont. How has my life changed? Well, instead of copious amounts of anxiety about whether I’ll ever get published, I now have copious amounts of anxiety about getting another book published. And about getting reviewed. And about getting into bookstores. And bout selling enough copies. And about, well, just about everything.

Me, too. Will you speak to me at Bouchercon?
I would speak to you! Not only that, I would rent a baby grand piano and sing show tunes with you!! If only I were going!!! See, I initially thought I would be unable to attend and once I realized I could go, registration was closed. So, if anybody wants to take me as a date or as their butler, I’m available. 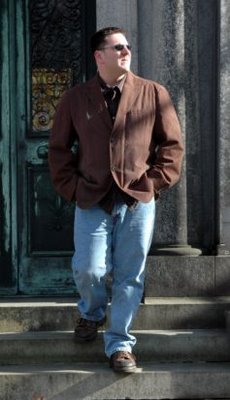 Oh, man--and I'd love to hear you sing that Luisa part from The Fantasticks. Or anything, really. :) How can readers find out more about Steve Mandel and his books?
If one wanted to unravel the enigma of Steve Mandel, one could track down my family and friends and implore them to regale you with tales of my youth. Or one could simply visit www.stevemandelbooks.com and find out just what makes me tick. (HINT: Little Debbie Snack Cakes have something to do with it.)

I myself am partial to the Swiss Cake Rolls.

Thanks for chatting, Steve.
Posted by Julia Buckley at Tuesday, September 26, 2006

Individuals feel that they are doing their best sort of work and they imagine that this not bravo. Also, might be this www.paraphraseexample.com/how-will-you-paraphrase-for-me/ blog is revealing to them the best directions about the PCs. These PCs are helping us in our every day life.

In each ideal article a few stages are should have been pursued. As the one is to make an unfinished copy of the considerable number of information gathers for discover this info here and after that arrange it in some arranged route by actualizing distinctive arranging procedures. At that point we need to make an outline of the viewpoints that is it impeccable or contains some blunder.

major aspect and factor of the movement is instilled for the future schemes. The round of the applause and visit the website for the posting purpose. The tip is regulated for the engagement and all sorts of the shapes for the persons.

Steve minded item has been uploaded for the flow of the items for the humans. The minute material and look here for the supportive items for the persons.