Cricket McRae on What Makes a Master Crafter, Why The Ides of March Can Be Lucky, and How Philosophy Teaches Thought 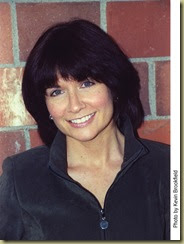 Cricket! Thanks for chatting with me on the blog about your homecrafting mysteries.

Are you yourself a master crafter?

Hardly. Master crafters spend years honing their skills, and generally focus in one or two areas. I’m all over the board, a devoted amateur. There’s always something new to learn. However some things I’ve been doing for so long that they’re second nature by now. For example, I began crocheting when I was six and started baking bread when I was eleven.

So far you’ve written mysteries set in the craft worlds of soap making, canning, and spinning. Are these all areas in which you have some experience?
I sold handmade soaps and toiletries online for a couple of years, and still make soap, basic lotions, etc. The first preserves I “put up” were in college, starting with my great-grandmother’s recipe for chokecherry jelly, and at least a few jars (and sometimes a lot) of my favorites go into the pantry each fall. In 1999 I learned how to spin much the same way my protagonist, Sophie Mae Reynolds, learns in Spin a Wicked Web. In fact, I learned from a fiber artist who lives in the same town on which I base my fictional Cadyville.

What makes crafting a good backdrop for mystery?

Well, there’s some inherent danger in a lot of the old time pioneer crafts. Lye is extremely caustic, and botulism is one of the most deadly toxins around. I mean, we’re talking biological warfare deadly. On the other hand, the idea of “crafting” can also provide a gentle feel for my contemporary cozies. Plus, as a reader I enjoy learning about new things when reading fiction, and the crafting backdrop offers plenty of that.

Cricket: that’s a neat name. Is it a real name, a nickname, or a nom de plume? Or am I missing an option?

I’m often asked at signings whether Cricket is my real name. My usual answer is a smiling “no,” and I leave it at that. It’s a nickname, and also my writing pseudonym because it’s light, like my mysteries, and far more memorable and easier to spell than my real name. I used to try to explain to people about both names, but it always seemed to confuse the issue more than clarify it. Since so many people already call me Cricket, including at home, I decided to just stick with that.

What made you start writing mysteries?

I grew up reading a lot of different things, but mysteries have always been my first love. As soon as I realized I wanted to write novels, I knew they’d be mysteries.

Will the homecrafting series continue beyond book three, or will you be starting other projects?

I’m working on the fourth in the Home Crafting Mystery Series, tentatively titled Something Borrowed, Something Bleu -- about artisan cheese making. My local dairy’s weekly milk deliveries have increased lately, and we’ve been enjoying the fruits of my “research.”

Oh, gosh. I guess in a word: flexible. Most days I devote at least six hours to writing, editing and marketing. I’m also pretty good about fitting in daily exercise. But my working hours might be in the morning one day, and the next tucked in around events and appointments and house renovations. Over the week I seek balance, including time with friends and family, and time devoted to other pursuits like crafts, cooking, and gardening as well as spending some time out in nature, usually hiking or biking.

How’s the weather in Colorado?

Cold, snowy and dry! For now, at least. I love the distinct seasons here. Just when I’m getting tired of one, along comes something new – in the gardens, in my activities, in my attitude. It’s like weather ADD.

You majored in English and Philosophy in college. Bravo. The two continuously intertwine, wouldn’t you say?

I would indeed, especially as my focus was on philosophy of language. I’d also argue that philosophy intertwines with everything else in life because in many ways it teaches you how to think.

Do you have a favorite work of fiction?

Nope. There are books I go back to – A Confederacy of Dunces comes to mind –and authors I seek out, but I like far too many books to commit to just one as a favorite.

Do you read mysteries, or just write them?

Mysteries are definitely my go-to reads, with some nonfiction – cookbooks, natural history, and biography, mostly -- thrown in for good measure.

Since you formerly had your own soap-making company, do you tend to give soaps as Christmas gifts?

I used to, but after a while my gifts got a little, er … predictable. So now when I make a batch of soap I tend to give it away as soon as it’s cured, rather than wait for Christmas. Same with pickles and jams, etc.

Well, if you ever feel like sending samples, I'll pay the shipping. :)

What were some of your favorite products?

My favorite products end up at the end of my books in the recipe section. They tend to be on the simple side; having a gazillion ingredients doesn’t always mean a product is better. So far I’ve provided recipes for lip balm, lotion bars, oatmeal milk bath salts, gel air fresheners, watermelon rind pickles, wine jelly, and bath teabags.

Your next book, Spin a Wicked Web, comes out in March. What’s the plot?

Sophie Mae joins the Cadyville Regional Artists’ Co-op and learns how to spin, but her first full hank of yarn is used to strangle a young woman well known for her predatory dating practices. Sophie Mae’s detective boyfriend, Barr Ambrose, asks her to find out more about the numerous suspects, most of whom are fellow members of CRAC. Add in the sudden appearance of Barr’s ex-wife – a younger and prettier version of Sophie Mae – the death of a policeman, sabotaged brake lines, a large inheritance and the usual antics of her housemates, and Sophie Mae has plenty to juggle along with her soap making business.

Sounds great! You’re the first Musings interview of 2009: do you have some big things happening this year with the new book’s arrival?

The book is due out around the Ides of March, which I choose to see as a good omen. I’ll be speaking and signing in the Seattle area in mid-April, and will making the rounds of several venues in Colorado and Wyoming in March, April and May. I’m also looking forward to attending Malice Domestic in Arlington in early May.

The Ides wasn't a good omen for Caesar, but it will be for you. :)

Thanks for playing, Cricket, and good luck with your series!

Thanks you, Julia. It was a pleasure!
Posted by Julia Buckley at Tuesday, January 06, 2009

Well, I have been a big fan of the Sophie Mae books from the beginning. They're very well-written and interesting. The characters are engaging. And the plots are never easy to figure out - always with realistic twists that keep you guessing. I can't wait for the next release, and am glad to hear there will be a fourth!

That said, though, I am a little uneasy that this author uses a pen name. I thought Cricket McRae was writing these books. What is this woman with the nice smile hiding, exactly, anyway?

Very funny, "Woody". Talk about a pen name! Will we be seeing that on the spine of your upcoming comedic thriller?

Cricket McRae is one of my favorite authors. She has a witty writing style that holds my interest and makes reading fun ~ what a concept! I'm anxiously awaiting the arrival of Spin a Wicked Web and Something Borrowed, Something Bleu. Thanks for posting such a great interview!

Thanks for your comment! Now Cricket can see how beloved her books are.

Cricket taught me that mysteries can be readable; I usually veer far away from them since other authors often seem to keep the relevant info hidden until the end, when it's suddenly revealed, so that the reader can't possibly figure out what happened. That's a game I just won't play. I've enjoyed her writing even since before she was published; her style is very readable because it's so natural.

I can't wait for the next book, or next series (if there're any agents or publishers reading this, I have two words for you: Merry McCoy).

With the zone of mysterious musings you can find the special notes with this great service. Get the great path with http://www.reworder.net/professional-online-rewording-tool/ and enjoy the new teacher of the philosophy. You can really go for the better challenge.

Section of the Cricket can give you the new challenge for your life with the master crafter. Just visit the website and find the new pattern of the life with this perfect zone. See the blog and find the mysteries of homecrafting.

The cricket session is waiting for the people in this zone of the perfection. You can hop over to this website and can find the new skills with the perfection. Get the new area of the soap making and get your fun.

In this time, there is great mood of concentrate in the schools and in their homes as they get everything to appreciate. They get take https://www.paraphraseservice.org/faq-about-how-to-paraphrase/ cash on regular routine which we don't had in our understudy life.

Writing is an art and writers always an artiest. This really very good article about the great author. Here you have provided excellent information about the author and her writing experience should helpful for other writers. Also check our professional writing services at https://www.professionalwritingservices.biz/services. This services will useful for every writers. Thanks