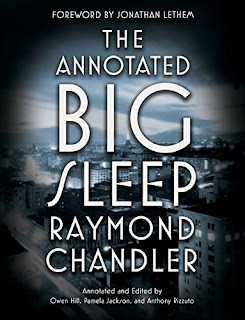 I am thrilled to have received an advanced copy of THE ANNOTATED BIG SLEEP from Vintage/Black Lizard Books. Raymond Chandler died in 1959, six years before I was born, but I always feel connected to him when I read his mysteries. His words effect that special intimacy with a reader that only the best writers can achieve; in fact, his books are so alive with wit and intelligence and satire that a reader feels almost collaborative when encountering Chandler--reading is not a passive event, but a conversation.

As the critical notes (written by Owen Hill, Pamela Jackson, and Anthony Rizzuto) make clear, Chandler was more than a mystery writer. His work was a commentary about a pre-and-post-war world that seemed to have been consumed by a general corruption, and his words contained such unblinking honesty that they can apply just as well to the depravity of the current era.

The annotated version contains a foreword by Jonathan Lethem, and an introduction by the three annotators, who suggest that "If Superman or John Wayne is the Zeus of American myth, and Marilyn Monroe is Aphrodite, then Marlowe is Prometheus: the noble outsider, sacrificing and enduring for a code he alone upholds." Perhaps this is the biggest part of Marlowe's appeal for a world that had been battered by war and which descended into an existential abyss.

One of my favorite details so far is that, in exploring an existential view of the world, Chandler achieved such spare and impressive prose that one might assume he had been influenced by the French existentialists--but in fact the reverse is true. "Albert Camus had pointed to American detective writers as a prime influence on his portrayal of the quintessential existential outsider, "L'Etranger," in 1942" (107).

Marlowe, too, is an outsider. Readers generally love The Other for the very fact that the societies in question have cast him out. We love the literary orphan (Oliver Twister, Harry Potter), the fictional dream-seeker (Gatsby, Don Quixote, Lily Bart), the rebel in an oppressive world (Hester Prynne, Edna Pontellier, Huck Finn). But Philip Marlowe stands alone, as the man who was forced to create a law unto himself, because he had a vague memory of justice that shaped his understanding of rightness in a world gone awry.

I will savor this book, first as a chance to re-read THE BIG SLEEP, and secondly for the rich textual notes that will deepen my understanding of the man, the work, and the time period.

(According to Amazon, THE ANNOTATED BIG SLEEP can be pre-ordered now).