Gar Anthony Haywood on The Great Crime Writers, The Influence of Children, and the Importance of Timing 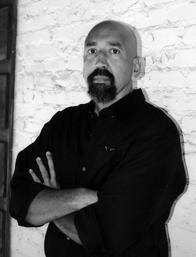 Thanks for chatting with me, Gar.

I’m curious about your name. Is it just Gar, or is it short for something like Garfield? If it’s the latter, were you named for the assassinated president?
I suppose being named for an assassinated president would make for a more exciting story, but the truth is I was named after the Gar fish. For those who aren't familiar with the specie, imagine a small barracuda with the whiskers of a catfish that's been hit flush in the face with a waffle iron. Yeah, I know. My father could be cruel that way.

You have great writing credentials: you’ve won the Shamus and Anthony awards for your crime novels; you’ve written for the Los Angeles Times and the New York Times; you’ve written for the television dramas New York Undercover and The District; and your work has been compared to that of Elmore Leonard. It’s probably unfair to ask which of your accomplishments you’re most proud of, so I’ll phrase it this way: what’s been the pinnacle of your career so far?
Winning the Shamus for FEAR OF THE DARK was definitely a highlight. But I think I'm most proud of being a favorite author of the poet Nikki Giovanni, who actually attended a signing of mine in Washington, D.C. several years ago. Humbling experiences like that don't happen every day.

I’m curious about your fictional sleuths, the Loudermilks. They’re a couple on the verge of fulfilling their retirement dreams—he an ex-cop, she an English teacher. Before becoming embroiled in a mystery, they are heading out in their truck and attached Airstream trailer for a wonderful adventure. Did you ever have dreams of touring the country and leaving your cares (and children) behind?
When I wrote the Loudermilk novels, my children were still rather young, so it was difficult for me to fully relate to Joe and Dottie's desire to ditch their own brood and never look back. However, now that my four kids are 22, 20, 7 and 4, respectively, I find myself scanning the Airstream catalog all the time. (No, just kidding. My babies are nothing like Joe and Dottie's crazies.)

In a related question, I’ve done some poking around on the Airstream website. This trailer, also known as “the silver palace,” is all of the following: sleek, silver, cool, expensive. Did you pick this kind of trailer at random, did you research it, or do you perhaps own your own silver palace?
When I first came up with the idea for the series, I had no particular brand of trailer home in mind. But my agent at the time, Dominick Abel, suggested I give the Loudermilks an Airstream trailer, because a) they're very distinctive looking, as you point out, and b) in terms of brand loyalty, Airstream owners make Harley Davidson fans look like rank amateurs. And Dominick was right. All my research indicated that, if I wrote Joe to accurately depict a dedicated Airstream owner, he'd be a fanatic from whom I could derive much comedy relief.

You’re also a graphic designer of some renown. You seem to have a lot of neurons on the right side of your brain, and they say that this neuron clustering is hereditary. Did you have creative parents?
My late father was an architect and furniture designer. My mother, who has also passed away, was a career housewife, which some people might argue is the most creative professional endeavor of all.

How did you happen to create Aaron Gunner, your African-American private eye? Was he someone you consciously wanted to create, or did he creep into your consciousness?
There was no creeping involved. Gunner was a very deliberate creation, formed over years of reading in the P.I. genre without ever coming across a credible contemporary African-American protagonist. Most of the choices I made regarding the character and the novel that introduced him (FEAR OF THE DARK), in fact, were extremely calculated. For instance, I knew early on that Gunner would operate much in the same way that the television detective who inspired his name---Peter Gunn---did, which is to say, out of an unusual workspace (a barbershop instead of a jazz club) and with the aid of a large cast of colorful friends and informants. Even Lilly Tennell, who owns the Acey Deuce bar where Gunner conducts a great deal of his business, was intended to be my take on the owner/operator of Peter Gunn's favorite jazz club, Mother's.

You list four authors on the “recommended reading” portion of your website: Ross MacDonald, Robert Crais, Lawrence Block, and Gary Philips, all of whose works are suggested as tutorials for would-be crime writers. What makes their writing such good reading?
Smarts. Flavor. Originality. Who does Elvis Cole remind you of? Matthew Scudder or Ivan Monk? Nobody, because these characters are fully formed and non-derivative.

Your upcoming novel, Cemetery Road, is a stand-alone book about a man coming back to L.A.—and his roots—to look into the death of an old friend. This in itself makes me think of Ross MacDonald, since his character Lew Archer more often than not found himself investigating crimes of the past—sometimes twenty or thirty years cold. Do you see comparisons between your work and MacDonald’s?
Every night. In my dreams. The truth is, CEMETERY ROAD marks my first real attempt to mix past and present storylines the way MacDonald did so brilliantly. It's a difficult stunt to pull off successfully, because timing is everything---switch time frames too late or too soon, or reveal too much or not enough at a critical moment, and you throw the rhythm of your story off completely. How MacDonald performed this balancing act as well and as often as he did remains an absolute wonder to me.

Me, too. He's the greatest. Your Ray Shannon novels are more lighthearted, and have elicited the comparisons to Elmore Leonard mentioned earlier. They say you can’t “write funny” unless you have a sense of humor. Are you a funny person?
I'm utterly hilarious. Sometimes even deliberately.

You live in Los Angeles, the land of Philip Marlowe. Are your books set in L.A.?
Do you ever think of Marlowe when you’re driving the mean streets? :)
CEMETERY ROAD and all of my Gunners have been set in L.A., but Marlowe isn't what I think of when I drive around the city. Instead, I think of all the predominantly non-white corners of L.A. that Marlowe never set foot in, either because Chandler wasn't comfortable taking him there, or didn't feel the need. These places tend to be Gunner's L.A. turf, and I'm happy to have it mostly to myself (with apologies to Gary Phillips and Paula Woods, among others---sorry, homies!).

The Chicago Sun-Times said that your novel Firecracker was “machine-gun paced.” How do you create this kind of tempo? Do you have a writing method, or do you simply hear the dialogue in your head?
Pacing and tempo are all about that word I used earlier: "timing." I always try to get in and out of a scene as quickly as possible, no matter what's happening in it, because I suspect a reader's patience for any scene is likely to be even shorter than mine. Essentially, I write the bare bones of what I see and hear, then move on, without bothering to describe things (clothing, furniture, weather) that have no real bearing on the plot.

You have four children, and the Loudermilks have five. Obviously one set of children is fictional, but do your children ever inspire the scenes that you write about parenting?
All the time. While much has been made of Joe and Dottie's impatience with their quintet of terror, what people always seem to remember about them, what strikes readers as the pair's most realistic feature, is how much they genuinely love their kids. That love always shines through, because for Joe and Dottie (and me), love comes first above all else.

Have your children inherited the right-brain neuron clusters?
Courtney (22) aspires to a screenwriting career; Erin (20) wants to teach; Maya (7) plays piano and writes poetry; and Jackson (4) creates mayhem. Whatever part of the brain they use most often, it's sometimes for certain (as Dottie Loudermilk might say) that they're only using one half, at the most.

Cemetery Road is coming out soon. What are you writing now?
Another standalone thriller and my seventh Aaron Gunner novel.

What’s the current book on your bedside table?
There are always more than one. At the moment, the stack looks like this:

Some people might believe negative stereotypes of Los Angeles, whether because of smog, crime, Hollywood types, etc. What would you tell them they should see in Los Angeles that would give them a whole new image of this place?
My home. No SUVs in the driveway, tofu in the 'fridge, or emergency phone numbers for plastic surgeons pinned to the kitchen cork board.

Good to know. How can readers find out more about your work?
Visit my website --- www.garanthonyhaywood.com --- where I try to keep the latest news about my work up to date.

I think you've given us lots of great ideas for summer reading! Thanks very much for chatting with me, Gar!
Posted by Julia Buckley at Thursday, June 21, 2007

The title of this site Mysterious Musings is very strange but have a great and motivational story of many people that have more influence on the many people through electronic media in this site. The suspense story was written by Louisa Luna is more interesting and create more suspences in the character of the story. You will be learning many important points of writing with the help of this link http://www.apostrophechecker.com/apostrophes-in-plurals-things-to-remember/. In this site, you can research more suspences stories on it.

Death and dark blue is a very fabulous story and all the characters of this book have a more creat suspensive in their action. The cover page of this book creates an attraction for readers to read this boook. In this site, you can easily read without pay any cost and check this link for learning more writing style http://www.nounchecker.com/paper-checkers-comparison/.The writing style has great worth for the advertisement of any book.

In the earlier century, progression wasn't accessible as it is open in this century and open is utilizing it in different fields. You can say helpful resources that improvement got the best change our reality and way of life of individuals has changed as a result of it.

I think, there ought to be AC, more sweltering and watercooler in all classrooms to manage climate burdens. No doubt, warmth can cause the demise of youths that is the reason, there ought to be AC and fans in each https://www.paraphraseservice.com/how-resume-rewording-can-help-to-get-a-job/ class to spare the life of blameless children.