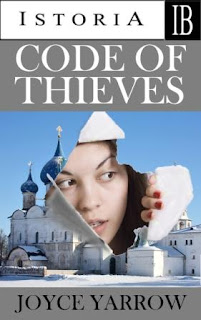 Code of Thieves, by Joyce Yarrow.  What a fun yet tense book, in which sleuth Jo Epstein, a poet and a private investigator, takes her investigation all the way from New York City to Moscow in order to prove a man's innocence.

The secrets she exposes along the way put her at odds with the police and in danger of losing her life.

More later, which will hopefully include an interview with Yarrow about all things Russian.
Posted by Julia Buckley at Saturday, May 19, 2012