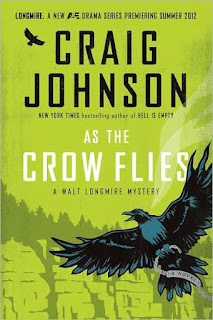 I'm thrilled to be starting Craig Johnson's AS THE CROW FLIES, especially with the arrival of A&E's LONGMIRE, based on Johnson's mystery novels.

I've interviewed Johnson here twice (see the list in the right-hand column to read the interviews), and I've also noted the similarities between Johnson and the great Ross MacDonald. So I'm no stranger to Johnson's series, or to the excellence of his writing.

In this eighth mystery, Walt Longmire must negotiate the perilous waters of his daughter's pre-wedding tensions as well as investigate an unexpected death which is not in his territory.

As always, I'm looking forward to immersing myself in one of Johnson's tales, right after I finish Lori Roy's BENT ROAD, which is currently keeping me in suspense!
Posted by Julia Buckley at Wednesday, June 13, 2012