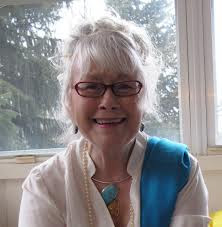 Hi, Kaye!  Nice to see you again on the blog.

Hi, Julia – Thanks so much for having me back.

Your writer friends have been telling you for years to write a book.  Not until recently did you take them up on the challenge.  What made you sit down to write Whimsey, your self-published book?

They have been, haven’t they?  Especially a couple in particular – Judith Greber and Earl Staggs.  Judith with gentle nudges, Earl – eh, not so gently.  (I’m teasing about Earl - sorta).  But after I retired I decided it was now or never and I wanted to see if I could actually write the book I wanted to write.  It took a couple years, but with Earl’s patient guidance, holding my hand and teaching me every step of the way, along with excellent editing on his part, I wrote the book that was living in my head and in my heart and I’m proud of it.

You live in Boone, North Carolina, but the island of Whimsey is located off of Georgia.  How did you decide upon the setting?

I love these North Carolina mountains, but I think by growing up on the water that’s where my heart is.  I find magic when I’m near the ocean and it just wouldn’t be “my” book if I tried to place the story anywhere else.

Whimsey the island is a place that celebrates the arts.   Was there, for you,  a sort of Renaissance feeling to this creation?

I wanted WHIMSEY to celebrate many things.  Connections for one, thus the strong family and friendship storyline that runs through the novel.  Beauty for another, and that’s where the artsy things came into play.  I’m a lover of beautiful things, and having these women who have been friends since they were little girls creating beautiful things just felt right to me. The renaissance may be in the rebirth of a talent thought lost by the protagonist, Emma, but truthfully, a renaissance for me--I’m not so sure.  An “awakening” of a talent, then yes, probably so.
I love the title, not only because it sums up the tone of the book but because it reminds me of Lord Peter Wimsey and of all things whimsical.   What came first: your idea for a title, or your idea for a plot?

The idea for the story came first – and I wrote a lot of it before Earl said, “Kaye, this is lovely, but you don’t have a plot.”  By then the name WHIMSEY was just there.  I have no idea where it came from, it was just there.  And I think it’s perfect and I love it and the name Whimsey, honestly, helped spark a lot of what happens through the book.  With a different title, even a working title, I don’t think the same book would have emerged.  I’ve always tried to live my own life with a bit of whimsy – right down to decorating our home with surprise touches of playful and whimsical things sitting around.  I’m sure it drives some people a little crazy when they walk in the door, and I sometimes think I’m going to try decorating the house like a grown-up and I try, but those “things” just seem to find their way back.  And having Lord Peter Wimsey as a long time “friend” was   part of the mix also.

You recently retired.  What’s the best thing about retired life?  Are you reading a lot more than you did before?

I love being retired.  I now believe I was born to be a retired person.  When I was younger my interests were SO different than they are now.  I had years of working in an office in jobs that offered little in the way of creative outlets.  I’ve taken a beezillion classes in lots of different areas – I’ve taken basketweaving, knitting, pottery, weaving, jewelry making, and I’m sure there are others I’m forgetting.  Some were more successful than others, but all were precluded by the fact that I had a “job.”  That job made a difference.  While none of the jobs have been bad, just the very fact of them seemed to suck up the time and the inclination to spread my wings and do more.  Once I retired I promised myself I would do the things I didn’t feel as though I had the time for while working.  The best thing is that time.  Time is my most cherished possession now and I try to use it in ways that are productive and bring me joy.  I am not reading as much as I did.  I’m still reading a lot and I still love it, but now there are other joys in addition to my books.

What made you decide to self-publish instead of going the route of querying agents or publishers?

I did it for a number of reasons, and it's working for me, but it's not for everyone.  The whole two years I was working on WHIMSEY, I had intended to try to publish traditionally. I did my research, I made lists of agents and editors of some of my favorite authors (the acknowledgements in books by your favorite writers is an excellent source for this type of information). But when I was finally finished and when Earl Staggs, who edited WHIMSEY, agreed that it was finally finished, the traditional route suddenly wasn't as important to me as it had been in the beginning.

What was important to me now was getting it out there. I personally think, for one thing, that starting out in the traditional way is now a young person's game and I'm not a young person and I'm not a patient person. And, truthfully, I wanted my mother to be able to read “Whimsey” and see it as a "real" book.

A more lengthy answer to your question, IF anyone is interested in here: http://www.meanderingsandmuses.com/2013/01/why-ive-decided-to-self-publish.html
In addition to the blog I wrote about why I made the decision I did (see above), I've also written a piece about the self-publishing process, and you can read it here - http://www.meanderingsandmuses.com/2013/03/what-ive-learned-so-far-about-being.html

Are you thinking of writing  a sequel to Whimsey?

Actually, my plan is to write four more WHIMSEY books.  There are five women (The Wicked Women of Whimsey).  WHIMSEY: A NOVEL focused on Emma.  Book #2, which I’m working on, will focus on Olivia.

One of your glowing reviews praises the descriptions of food in your novel.  What was the food description that was the most fun to write?

I love to eat.  I wish I loved to cook as much as I love to eat.  But some of my loveliest times seem to involve nice meals shared with good friends.  Hanging around in their kitchens, sitting around tables.  I don’t think Donald and I have ever taken a trip that we don’t seem to gauge it by how well we ate.  So, there’s a lot of that in WHIMSEY.  I think one of my favorite scenes is one where most of the book’s characters are gathered for a “breakfast for dinner” being whipped up by Emma’s mother, Zelda.

What did your husband and canine companions do when you were answering your writing Muse?  Did they miss you while you typed away?

Donald Barley is so good.  He has encouraged my writing since the very first piece I wrote in 2008 – a blog for The Stiletto Gang about my efforts to quit smoking.  He’s always been there for me to bounce ideas off when I write at Meanderings and Muses, and he encouraged me to write yjr pieces which I was thrilled to have accepted for two regional anthologies.

While I was writing WHIMSEY and we would talk on the phone during the day he would ALWAYS ask, “Are you working?”  and if I wasn’t, he would nudge me a bit. 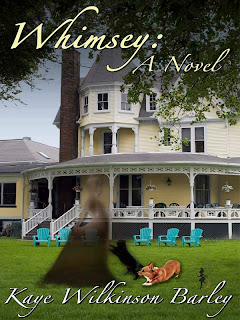 Has Spring come to Boone?  If so, what does spring look like there?

Spring?  NO!  Is it ever coming???  We’re expecting snow this week.  How ‘bout you?  Are you beginning to see lovely spring flowers?

Actually, it's cold in Chicago, too.  We had an entire March without any temperatures in the 60s, and April has been mostly that way, too!

If you could go to Whimsey, what’s the first thing you would do there?

I would go sit on the beach and watch the sunrise.

Aah. Where can readers find out more about Whimsey and Kaye Barley?

I talk about WHIMSEY endlessly.  Everywhere.  If you’re at Facebook, I’m there – a lot.  But here’s the WHIMSEY webpage which includes a schedule of blogs where I’ll be popping up.  It also includes the first chapter of the book.  http://www.kayewilkinsonbarley.com/  AND, I’m the blog mistress of Meanderings and Muses - http://www.meanderingsandmuses.com/ .  AND the very cool women at Jungle Red Writers let me pop in to play the first Sunday of each month - http://www.jungleredwriters.com/

Thanks for chatting, Kaye!

Julia, Thank You!  It’s always fun to spend a little time with you, my friend.
Posted by Julia Buckley at Monday, April 08, 2013