Barbara Rogan on Writers, Agents, Editors, and Her New Mystery 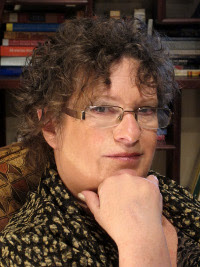 Hello, Barbara!  I enjoyed reading your new mystery, A DANGEROUS FICTION, and once I got about halfway through I really couldn’t put it down until I finished it!  Thanks for agreeing to chat about it.

Let’s begin with the title: it’s a clever one, referring both to the publishing business, in which the main character works, and the heroine’s tendency to embellish her history. What came to you first: the title, or the plot?

I'm glad you enjoyed the book. I agree, it is a very apt title; but as usual with my books, I didn’t come up with it. It was the brainchild of my editor at Viking. While I was writing the book, I was calling it “Can You Hear Me Now?” which I quite liked; but “A Dangerous Fiction” really nailed the novel and I loved it as soon as I heard it.

Your main character, Jo, is tough, yet vulnerable, and she goes through a lot in this novel, both personally and professionally.  Is she utterly fictional, or is she an amalgam of agents you have known?

I subscribe to the great Ivy Compton-Burnett’s take on creating fictional characters.  “People in life hardly seem definite enough to appear in print,” she once said. “They are not good or bad enough, or clever or stupid enough, or comic or pitiful enough.”  I drew from my own experience and that of my friends in the industry to write this book, but Jo Donovan, the character, was who she needed to be for the story.

The book offers us an inside look at a successful literary agency and some of the work that is done inside. I was shocked by the uncertainty of it: the fear of colleagues who might bear grudges, of media that might affect the agency’s reputation, of clients that might leave, seeking greener pastures.  Is agenting, indeed, not for the faint of heart?

Publishing in general is not for the faint of heart, whether you’re an editor, agent, or writer. When I first started my agency, there were times that I had to worry about putting food on the table. But most people who work in that field do it because they love books and writing, and both agents and editors take great pride in their writers' work.

The cop in the novel, NYPD Detective Tommy Cullen, is an attractive man. He reminded me of Joseph Cotton’s character in Dial M for Murder.  Do you happen to like that Hitchcock flick?

I do, though I haven’t seen it in ages. In the back of my mind, though, as I wrote A DANGEROUS FICTION, I was hearing dialogue from those classic Thin Man movies and Dorothy Parker’s stories.

Cool!!  Jo’s past is littered with memories she doesn’t want to confront: the deaths of her parents; the abuses perpetrated by her grandmother; the marriage she insists was perfect. Why would someone as brilliant as Jo be so limited in analyzing her own experience?

Because it worked for her to compartmentalize her life, instead of integrating all its disparate parts. That integration is part of the journey she’s on, and one of the reasons I feel compelled to write more about Jo. But don’t we all tweak bits of our lives to make it a better story?  Fiction is so much tidier than real life: more reason, less chance. 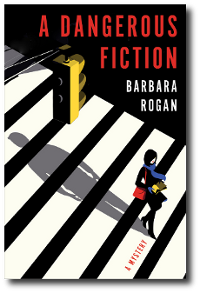 I was particularly fond of a character named Mingus, who happened to be a dog.  Is Mingus based on any German Shepherds you have known?

All of them. So glad you liked Mingus! A good German shepherd is pretty much the ideal dog for me. Except for the shedding.

Jo has quite a few men in her corner.  Are they protective of her because she is vulnerable, or do they naturally want to help a beautiful damsel in distress?

She has women in her corner, too. And she’s pretty tough; I don’t see her playing the helpless woman card.

While we’re on the subject of beauty—you have quite a few truly beautiful characters.  Two gorgeous young interns, a beautiful protagonist, and a former lover whose nickname was “Prom King.”  Do you think audiences are more sympathetic to beautiful people—even fictional ones?

Subconsciously they may be. Studies have shown that in real life attractive people have a pronounced advantage; it’s not unlikely that that carries over to fiction. But I’d like to think there are functional reasons my characters look the way they do. Certainly it’s true in Jo’s case, because she’s used her looks, along with brains and determination, to make her way in the world.

You once ran a literary agency in Israel. What are the notable differences between agenting in Israel and agenting in New York?

New York is tougher, because it’s never one person who decides to buy a book, a number of people have to weigh in, and any one of them can veto it along the way. In Israel, editors seemed to have more autonomy. But I haven’t been an agent in many years, and things may have changed.

You once met Madeline L’Engle.  What was she like?  How did you happen to meet?

I represented her U.S. agent, Theron Raines, for Hebrew rights, which meant I handled her books among others. I took the opportunity of introducing myself, because I pretty much worshiped her. She was my favorite writer as a kid, and I still remember the experience of reading A WRINKLE IN TIME one day when I was 8 or 9 and thinking, for the first time, that I wanted to do this; I wanted to make up stories and write  books. We met a few times at the Cathedral of St. John the Divine, had lunch and talked about books and writing. When my second novel, CAFÉ NEVO, was published, she wrote that it was “a wonderful novel with richly developed characters acting and interacting… the café and its clients will long remain in memory.” What was she like? Some writers put the best of themselves into their work and don’t have much left over. Madeleine L’Engle was as kind and gracious as she was gifted.

I always got that vibe from her dust jacket photo--it's nice to know it was true. What are you reading now?

Are you writing another mystery?

I’m currently writing the second of what will be at least two more Jo Donovan mysteries. She interests me strangely.

Awesome! You’ve done it all in publishing: agenting, writing, teaching, leading seminars.  What advice do you give writers that they seem to find the most helpful?

I also teach writing, at my online school www.nextlevelworkshop.com,  so I am a fount of advice. Very generally, I advise writers to work on the craft and not to rush a story into print just because it’s so easy to do in the era of easy self-publishing. Novels are complicated; they take time and multiple drafts to fully emerge.

You’ve traveled many places; is there a place on Earth that you’d love to visit but have not yet done so?

Kenya and South Africa. I want to do a safari, though preferably one with comfortable beds and no bugs.

Which of the places you’ve visited was the most beautiful?

The west coast of Ireland; the Adriatic coast around Dubrovnik; parts of Switzerland; and Ein Gedi on the shore of the Dead Sea.

Thanks for chatting with me, Barbara!

My pleasure. Thank you for having me.

Find out more about Barbara Rogan on her website.
Posted by Julia Buckley at Monday, July 29, 2013

I was very pleased to find this site.I wanted to thank you for this great read I definitely enjoying every little bit of it and I have you bookmarked to check out new stuff you post.

Thanks, Urdu and Chang!