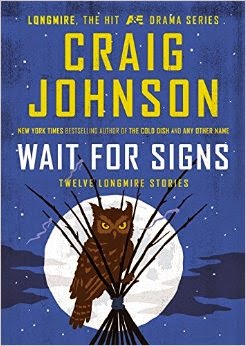 I was super excited to get this petite volume in the mail--a book of short stories by the great Craig Johnson, the creator of the Walt Longmire mystery series.

Angela at Viking/Penguin filled in the interesting background of this compilation:

"Ten years ago, Craig Johnson wrote his first short story, the Hillerman Award-winning Old Indian Trick. This was one of the earliest appearances of the sheriff who would go on to star in Johnson’s bestselling, award-winning Walt Longmire novels and the hit TV drama series Longmire. Each Christmas Eve thereafter, Johnson has sent to friends a new short story featuring an episode in Walt’s life that doesn’t appear in the full-length novels. WAIT FOR SIGNS is the first time these stories are available in a single volume and also features an entirely new story, Petunia, Bandit Queen of the Bighorns."

I love Johnson's writing, and have talked about it in various blog posts that you can read here, here, and here.  In the last link I compare Johnson's writing to that of one of my other favorite writers, Ross MacDonald, who paved the way for writers like Johnson with his moody Lew Archer mysteries.

It will be nice to be able to enjoy some of Johnson's fiction in smaller, more easily digestible pieces (for the reader on the go!)

The book goes on sale officially on October 21st!

Do you know where these fit in with the novels, in terms of reading order? I'm assuming that Old Indian Trick would be a prequel as it was published prior to The Cold Dish. And Divorce Horse comes after Hell is Empty; Messenger after As the Crow Flies (I believe). But where do the others go on the Longmire reading list?