A Poem For My Father 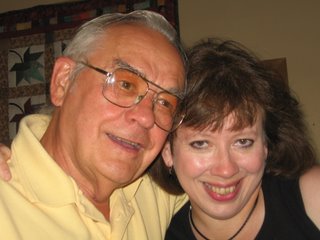 My father and mother were born two years and six days apart. Today my father celebrates his 77th birthday. He told me he'll be spending most of it working on his garden.

In reflecting on his eventful and often very difficult life, I am impressed by the fact that I owe much of my worldview to my father's insistence that I leave my house (where I would have stayed forever with a book in my hand, curled up on the couch) and actually see the country I lived in. Every vacation he bundled us into the car--his wife and five children--after a family meeting where we were allowed, once we were old enough, to vote on a destination (out of a few carefully selected choices). And then we would drive there. Sounds simple, but it must have been a pain: the packing, the planning, the arrangements made for the animals we left behind.

But my father is Hungarian, and must have more than a little of the gypsy in his blood, and he loves to wander. So because of him, I saw many of the fifty states and learned to love the rolling scenery. As a teenager, I hassled him. How fun it must have been to be in the car with me.

"A campground with no showers? Are you KIDDING, Dad?" or "This place is totally full of grasshoppers. We're not STAYING, are we?" We were. And I lived. (Though I'm sure they were close to killing me more than once).

In any case, I wanted to celebrate my father on this most auspicious day. This is a poem I wrote for him long ago.

How much we learned
As vagabonds
Watching the white line
Scenting scenery
Dad always steady at the wheel!

Rolling and unrolling in traveling beds
In many a welcoming forest–
Rain pelted our thin canvas home
As our doused lantern plunged us
Into truthful Darkness.

Mountains loomed and became real–
Pictures can’t do them justice–
Nor give credit to graceful deer, or
Glorious sunsets on untroubled horizons.

We munched from tin bowls in chill morning
Then dozed, drooling against one another
Soon after the car crunched its way back to the Interstate
Seeking new adventure.

We rattled down unlikely rock roads
Frowned over maps in familial conspiracy
Sighed over sunrise and raced scudding clouds;
We ate well at jovial tables.

How much we learned of love
In car and trailer
Day and night
Our rolling world of discovery.
Posted by Julia Buckley at Monday, August 11, 2008

Beautiful. A very happy birthday to your father.

Thanks! I'll pass that on to him.