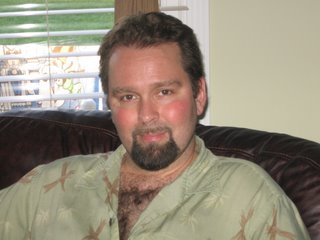 Some people think my husband died in a tragic drowning when he was a mere thirty something, after taking the world by storm with his avant-garde music. But that, in fact, was a different Jeff Buckley, and ironically he died on the above Jeff Buckley's ninth wedding anniversary.

My Jeff Buckley has been married to me for eighteen years, and has read many a manuscript while I watched him from across the room, hoping for praise. The most coveted mark he can make on my page is the smiley face, which he only bestows upon things that make him laugh out loud. Sometimes he'll return a piece of writing to me and I'll say, after a quick perusal, "This page should have had at least one smiley." He shakes his head. The smileys are not given randomly.

Jeff is a good father and a nice man, and if he were more ambitious I'm sure he could have published books himself, especially a compilation of the stories he tells our children, which are outrageous, outlandish, and hilarious. I'll have to start recording them on his behalf.

But in the meantime, I wanted to sing the praises of a lesser known Jeff Buckley, especially as Father's Day approaches, because he's doing a wonderful job.
Posted by Julia Buckley at Thursday, June 15, 2006

Because of this post, I got out my Jeff Buckley CDs!

Ah, so you're a fan? We meet a lot of them. More than once, if a colleague or someone asks what my husband's name is, I'll say Jeff and they'll say, "But not THE Jeff Buckley?" Of course that was before Jeff Buckley died. Now they pretty much realize it can't be him.

"I'm the zombie Jeff Buckley. But please don't ask my to sing. Eating brains is hell on the vocal chords."

Okay, I have no idea where THAT came from. But, yeah, I do like Jeff Buckley, though I'm not sure I would call myself a fan. I am a fan of writers, but usually I just like music or musicians. Sometimes I like them a lot, of course. Jeff Buckley had an amazing voice, but I have to confess that with the exception of the live version of "Hallelujah," which is in my iPod, I haven't listened to him in a while. The CDs were actually dusty!

Calling myself a fan feels weird to me because it makes me think of a friend of mine who is absolutely obsessed with Pink Floyd. He'll call me up and say, "Okay, so remember I mentioned Bob Blahbittyblah? Well, it turns down he's the guy who taped down the microphone cord on the stage at the July 14, 1973 concert in Surrey!" To which I'll say, "That's, um, fascinating. You're a freak." He doesn't disagree with me.

I tend to know nothing about famous people except what I happen to absorb osmotically in the supermarket check out line, which I think makes me not very fannish. I found out about the not-your-husband Jeff Buckley's death, for example, last summer. I was driving with my daughter with the iPod playing through car stereo, and the aforementioned "Hallelujah," came on. I said, "This guy's really good. I haven't heard anything new from him in forever though. I wonder why." She said, "Dad, he's been dead for eight years."

Anyway, that meandered, didn't it?