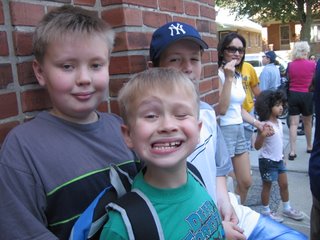 It was once said that writing is hard work, but writing humor is really hard work. Or words to that effect. So what does it take to write humor? Well, I would suggest that the first step is to have a sense of humor. This would be easy for an author to determine. They could just ask a few honest friends: Do you think of me as a funny person? If the answer is no more than once, then an author probably shouldn't attempt humor writing, since they would lack an authentic voice.

But what is funny, and how would a writer know that it would be funny to all people?
Read the works of certain classic humor writers and you'd get a sense of this. Read Erma Bombeck, for example. Or P.G. Wodehouse or James Thurber. Their humor is timeless, like the humor of the Marx Brothers. Consider some classic examples from the authors just mentioned.

If you're writing a dialogue about a teenage boy having breakfast with his family, and he wants someone to pass the jam, you might write, "Phyllis, please pass the jam."

In the hands of the great PG Wodehouse, this becomes "Jam please, Phyllis, you pig." (From Mike at Wrykyn).

This is still a quote bandied about in my family, even though my brother, who read it aloud to us when he was in the eighth grade, is now 45 years old. Why? Because it's funny.

It's also funny that James Thurber, in "The Night the Bed Fell," focused not on the falling of the bed, but on the eccentricities of everyone in his family, including his odd cousin Briggs Beall, who had a fear that he would stop breathing in his sleep, and kept spirits of camphor next to the bed in case he needed reviving; or his strange aunt, who was so afraid that a burglar would come and chloroform her in the night that she would stack all of her possessions near the door each night and leave a note saying "This is all I have, so please do not use your chloroform, as this is all I have."

Also a family classic, and an American classic, to be read over and over again, because humor is timeless. That's why I still laugh when Groucho Marx says to poor Margaret Dumont: "Do you know why I was having dinner with her? Because she reminds me of you."

And what person couldn't appreciate the simple, but hilarious, wisdom of Erma Bombeck? For example, her take on matrimony: "Marriage has no guarantees. If that's what you're looking for, go live with a car battery."

Reading humor is a good litmus test for whether or not you're cut out to write humor, in my most humble opinion. Another is whether or not you make people laugh on a regular basis. If you do, start jotting down some of those bon mots and see what you create.

There's very little humor in my first mystery, but my Madeline Mann series is meant to be humorous, and was in many ways more fun to write. But we will save Madeline and her eccentric family for another post.
Posted by Julia Buckley at Wednesday, June 28, 2006