anks for chatting with me, Kate! Mystery Scene sponsored a fundraiser to help libraries affected by Hurricane Katrina. Do you think people are already starting to forget the devastation caused by Katrina? Sort of an “out of sight, out of mind” mentality? What prompted you (and therefore Mystery Scene) to get involved?
I think the sheer scale of the disaster is daunting to many people. We came up with our fundraising idea after reading about the clean-up effort sponsored by the American Library Association during their recent convention in New Orleans. (Eight of the twelve branches in the system were entirely destroyed by the flooding and the remaining four were damaged.)

We started the fundraiser in September at Bouchercon with $500 and a pledge to donate $5 to NOPL for every back issue of Mystery Scene we sold in 2006. Thanks to the enthusiasm of our readers (some of whom simply sent money for us to pass along) we were delighted to send the Library Foundation a check for $2,000 in December, 2006. We’ll be extending the back issue donation for 2007 and coming up with other ideas, too. Our website http://www.mysteryscenemag.com/ will have updates as will the magazine.

You just finished up your Winter issue. What fun features can readers expect?
We’ve got profiles of Alaskan mystery writer Dana Stabenow, the cozy with an edge novelist M.C. Beaton, and a new writer, Matt Beynon Rees, whose first novel is set in the Palestinian community in Bethlehem. Plus, we’ll have an article on the use of maps in mysteries, the Crime Lab Project that author Jan Burke helped start, and undercover identities in publishing, among other items.

You acquired Mystery Scene in 2002. How did you acquire it?
Ed Gorman, Mystery Scene’s editor & publisher at the time, had been sick and wasn’t able to keep up with the workload. He called and asked if we wanted to become publishers – and we really did.

Happily, Ed’s health has stabilized and allowed him to continue as a regular contributor.

What’s an average day like at the Mystery Scene office?
Hmmm. An average day is lots of email & phone calls, carting magazines & books around, a trip to the post office, cursing the computer, etc. Your usual office routine. I do most editing at night or on days when I banish everyone from the office.

Doug Greene calls you “one of the premier authorities of the genre.” But I am guessing that this authority stems from a basic love of mysteries. When did you start reading them?
I started with the usual suspects – Nancy Drew, Trixie Belden, etc., then moved on to Dick Francis and Elizabeth Peters at a fairly early age. I’ve always read mysteries but I read lots of other kinds of books, as well.

I’m not sure I would call myself one o 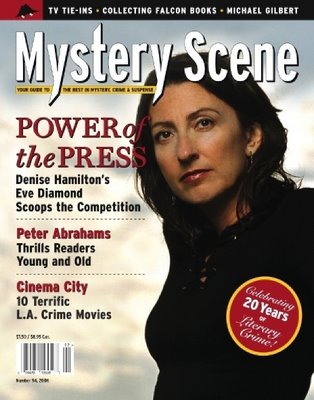 When you’re under a stressful deadline, what’s your snack food of choice? Or are you not a stress eater? If not, do you have a stress crutch? Caffeine? Cigarettes?
Caffeine is my drug of choice. When I’m really under deadline pressure Brian will toss me rolls of a Canadian candy called Wine Gums.

Mystery Scene is “an extension of [your] consulting business,” but it must take up the majority of your time! How do you balance all of your tasks? Do you ever feel as though there aren’t enough hours in the day, or is that just me?
I do spend most of my time on the magazine these days. Very occasionally I’ll take on some outside projects but usually it’s to help out a friend.

It can be very hard to manage the workload of our small magazine – and sometimes I don’t, quite frankly. Correspondence or side projects can be delayed because my priority has to be getting the magazine out. Technology is a great help, though -- we work with most writers, designers, proofreaders, our printer, etc., via the internet which speeds things up a lot.

The magazine seems to have grown and expanded under the your leadership, and that of your co-publisher Brian Skupin. What are your goals for the magazine in the coming years? 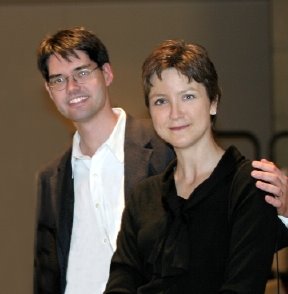 We would like to see Mystery Scene’s circulation continue to grow. Being carried by Barnes & Noble, Borders, Waldenbooks, etc., has helped that a lot but we’ll be trying other methods as well.

At some point, I’d like to publish six times a year instead of our current five times. Brian is working on a host of new features at the website and I always have plans for editorial changes, etc.

If you could interview a deceased mystery writer, who would it be? What’s your dream scenario?
My dream scenario would be finding a fabulous journalist to interview a sober Edgar Allan Poe. I really don’t want to write for the magazine myself, it’s more than enough work to edit the thing.

Mystery Scene also reviews television shows. What’s your favorite tv show? Do you have time to watch tv?
Brian and I generally watch an entire year of a TV series when it comes out on DVD. Right now we’re going through the third year of 24. When that’s done, we plan on watching The Wire.

I recommend Arrested Development. I got it for Christmas, and we've been watching like addicts. And we find new jokes each time.

Running a magazine has to be hard work; but you must also have had some terrific experiences. What’s one of your favorite memories?
Winning the Bouchercon’s Anthony Award in Brian’s hometown of Toronto was a great experience and nice encouragement early on when we really needed it. Receiving MWA’s 2006 Ellery Queen Award as co-publishers of Mystery Scene was right up there, too. It meant a lot to me to see Brian get the credit he deserves for his work at Mystery Scene.

When you need to get away from it all, where do you go? Do you have a favorite vacation spot, or maybe just a favorite chair?
Brian and I go up to our house in the Hudson Valley where I spend most of the time gardening and he revels in his own private office.

Do you think readership of mysteries is growing or waning?
I think it’s growing and will continue to grow for some years. The Baby Boomers are in their prime reading years and now that their kids are through college and out of the house, they have more time, and more money, to spend on books.

What are you reading right now? Aside from magazine submissions?
One book I’m reading is The Collaborator of Bethlehem by Mathew Beynon Rees, a former journalist for Time in the Middle East. It’s a remarkable inside look at the very difficult lives of average Palestinians. He’s definitely a writer to watch.

Another book I’m enjoying is Steve Hockensmith’s On the Wrong Track, which comes out in March. This is the follow-up to Holmes on the Range, which introduced the sleuthing cowboy brothers, Big Red and Old Red Amlingmeyer. Smart, funny, very well-written with a lot of heart-- I really love this series.

What events will you attend in 2007?
We always go to the Edgar Awards in New York. In May, we’ll be in the Washington DC area for the Malice Domestic Convention where we sponsor the New Authors Breakfast every year. We’ll probably be at ThrillFest this year and we’ll definitely be at Bouchercon in Anchorage, Alaska, in the fall.

Thanks for chatting, Kate! It’s nice of you to take the time when I know how busy you both are. And thanks for Mystery Scene!

There have so many ghost writers you will found who would work in such a way that no one can get their working way. So you will find one in here http://www.originalitychecker.net/copy-checker/ in ghost writing side.

You know you can easily check those commas online with free of cost and let these things done perfectly with your site which you can reference in here and get things done.

Wonderful post,The TMI school image of the football crew which is comprised on young men is looking astonishing and students easily get look here to improve their work. In this age, they can find out about the new experience of life and turn into a develop man in future. All the young men looking cool and modish.

Excellent post,Geeklog is the site of innovation and gives diverse instruments to the watchers. The most essential thing about this site is that each sort of individuals can utilize this site for the individual use and increment the experience but now you can check more info for educational task. What's more, every time you complete an ideal employment for the watchers that make this site best.