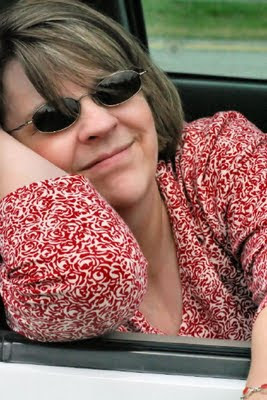 Hi, Pauline! Thanks for chatting.

Your website is called Perils of Pauline. Did you watch that cartoon when you were little?
Actually, I got the idea from a very old movie, called The Perils of Pauline. Pat Boone played the hero. I remember his teeth would sparkle when he smiled. It had a villain and lots of peril. When all the stuff about author branding began to hit cyberspace, I was a bit stumped, because my books cross genres and then I realized I’d been using my brand all along. All my books have peril.

Your latest novel, Out of Time, has its protagonist, Mel Morton, traveling in time. Is this a concept that’s always interested you?
Yes, I’ve always been drawn to time travel shows, even the really lame ones. I love the “fish out of water” aspects of traveling through time. And I like the idea of being able to “redo” a bad decision or change the future. That led me naturally to: what if you did change something and you really messed things up?

If you could go back in time, like Mel, where (or when) would you go?
I’d probably go back to WWII, too. I know I wouldn’t want to go to any time period without bathrooms! Or electricity. Or chocolate. And I’d want to take comfortable shoes with me.

Mel meets Jack Hamilton, a “sexy octogenarian, genius/scientist and former WWII bomber pilot.” None of the octogenarians I know are sexy. What makes Jack such an attractive guy?
Think Sean Connery. That guy is STILL sexy and he’s getting on in years.

In my story, I think partly what makes him interesting to Mel is who he is. She doesn’t just see an older man, she sees the pilot she’s heard stories about all her life. And he’s held up real well.
Posted by Julia Buckley at Saturday, January 20, 2007

I have heard about this essay inflater using side in this site http://www.smalltextgenerator.com/generator-for-small-text/ but I did not use them before but with their help now I am using it so many time.

I love to read this kinda blogs because it is very informative. I always get more Information and this is quite helpful to learn more.

The original site of sentence corrector is here. This kinda information is need of every student and writer.