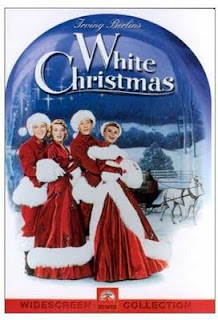 My son made me a generous pledge, in the spirit of Christmas: that he would watch any movie with me that I might choose, even if it was a movie he didn't like. This offer would last, he assured me, all through Christmas break. This is quite a sacrifice if you take into account how boring both of my boys find my movie choices.

He started off by joining me in the viewing of one of my holiday favorites, White Christmas. (Bing Crosby, Rosemary Clooney, Danny Kaye, Vera Ellen). He watched intently enough, asking "Who is this guy? Is he a main character? Will we see him again?"

Then, when Wallace and Davis (Crosby and Kaye's characters) were packing to take a train to New York but also maintaining a snappy patter, Graham furrowed his brows. "Why do they keep throwing things to each other?" he asked.

"They're packing," I said. But he was right: they were doing a lot of throwing.

"Why is she taking such giant steps?" he asked during the "Mandy" number.

Later still, Danny Kaye and Vera Ellen had a wonderful romantic dance to the song "The Best Things Happen While You're Dancing." Vera's lovely ethereal dress flipped and floated, and she and Kaye seemed to defy gravity before he dipped her, her blonde hair floating downward, in a romantic embrace near the moonlit water.

"Wouldn't it be funny if he threw her into the pool?" Graham asked.

Now I was the one frowning. "That wouldn't be romantic, Graham."

"It would be better, though."

Maybe he's right. I like White Christmas for many reasons, but several of them are related to nostalgia. As a modern movie, it wouldn't last long unless there was a kidnapping or a bikini scene or a car chase.

Or if someone threw Vera Ellen into a pool.

In any case, by the end of the movie he had practically lost interest. "So that's it?" he said. "He ends up with the girl?"

"And it snows. And they made the general happy."

"Yeah, okay," said my son. I wonder if he's re-thinking his former generosity. But too late now. A gift is a gift, and I'm not returning it.
Posted by Julia Buckley at Wednesday, December 12, 2007

White Christmas is one of my favorite Christmas movies...Holiday Inn is the other. They share several things in common: the song, "White Christmas," Bing Crosby, and a setting of a New England inn. Many people confuse the two. After finishing John Dandola's DEAD BY ALL APPEARANCES, which features Majorie Reynolds, who is also the female lead in Holiday Inn, I just had to get a copy of the movie. Last Friday night my husband and I watched it. White Christmas is next! Holiday Inn is an older movie than White Christmas...in fact, it's the 65th anniversary of it, so there are even more things that you would need to explain. John's book and Holiday Inn are a nice little package for Christmas.
Mary Beth

I am reading that very book now! :)

While White Christmas is fine, our all time favorite holiday movie with Bing Crosby is Holiday Inn. My daughter loves it, even though "it's in BLACK AND WHITE."

I do love HOLIDAY INN. My favorite line is:

My favorite line in Holiday Inn is:

You guys are good. I mean I've seen that movie dozens of times and can't commit all those lines to memory! BUT, I now have my own copy of it, so you know I'll be listening for them.
You know I mentioned about your kids having quetions because of the age of the movie, well my two teens are thinking that a part of Holiday Inn is politically incorrect. I had some of my own explaining to do.

That's a good one, Karen.

And I know what you mean, Mary Beth. But of course that opens up a great dialogue about what has improved since then. :)