"I had thought we might do lunch today," Sonya Reyes said, looking around the small room with the mirrored wall. "But I had in mind asking you to join me at my club, not someplace like this."

Milla stared at the woman in the tailored suit, pearls, and designer shoes. She certainly didn't look like a crazed drug addict wandering around greenhouses in the middle of the night putting detectives in garbage bags. She also had perfectly manicured fingernails.

"What did you want to talk about?"

"Carla Jordan, of course. I needed to talk with you privately about something Carla told me."

"You didn't want to tell me about your cocaine habit?" Milla dropped her little bomb and waited to see Sonya Reyes' reaction.

The woman didn't deny it, Milla had to give her that. She calmly described several failed trips to rehab and how concerned she was that her little habit was going to be the reason her husband would never reach higher office. She also admitted that cocaine was an expensive habit to support.

"Who were you buying drugs from?" Milla was laying odds it was either the "dead Sunflower" Carla or the "it'll give you wrinkles" Liza.

"The caterer? Did Carla know?" Milla supposed that made sense. She hadn't heard any raves about the food, yet the couple was invited to work an "A-list" party?

"I don't think so," Sonya answered. "She was kind of miffed that G. Winston Howard didn't use some caterers she'd picked out."

Milla stood and walked around the room. She knew Fletcher was videoing their conversation. She also knew he'd advised Sonya Reyes of her legal rights.

"What did you want to tell me when you called last night?"

The mayor's wife sighed. "I wanted you to know that Carla had been blackmailing my husband."

"Over your drug use?"

"No." Sonya's eyes met hers. "Over some missing building funds. She thought Juan was padding building contracts and taking kickbacks from Steven McCall."

The woman shook her head vehemently. "No, no. Juan would never do that. He has too much respect for law."

Leave a comment here for a chance to win my spooky-covered mystery, THE DARK BACKWARD. 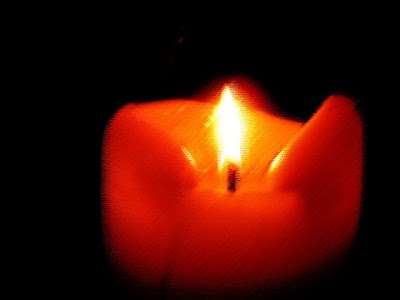 This time of year make me think of Hamlet's brooding words:

'Tis now the very witching time of night,
When churchyards yawn and hell itself breathes out
Contagion to this world."

But those Shakespearean lines, spoken out of Hamlet's murderous desperation, create a wonderfully Halloween-y mood, don't they?
Posted by Julia Buckley at Tuesday, October 27, 2009 No comments:

This is my fortune-cookie-like puzzle for the day.
Posted by Julia Buckley at Sunday, October 25, 2009 5 comments:

Beauty is Where You Find It

Last week I took a picture of the trees outside work--clothed in autumn finery and brightening the parking lot. Today, after some wind, they are stripped of every leaf.

So in seeking color for this photo, I had to focus on the beauty that remains on the ground.
Posted by Julia Buckley at Friday, October 23, 2009 2 comments:

"We have learned in recent years to translate almost all of political life in terms of conspiracy. And the spy novel, as never before, really, has come into its own."

So wrote John Le Carre, who was born on this day in 1931. He is celebrated for a series of espionage novels, most notably those about George Smiley, an intelligence officer working for MI6. Smiley is the central character of Le Carre's breakthrough novel, THE SPY WHO CAME IN FROM THE COLD.

On LeCarre's stylish website, he writes of his isolation--"I live on a Cornish cliff"--and of the fact that the author is always in a precarious position, in that his imagination creates a world that the public believes in, and this makes the author a fake:

"Yet I . . . despise myself in the fake role of guru, since it bears no relation to who I am or what I do. Artists, in my experience, have very little centre. They fake. They are not the real thing. They are spies. I am no exception."

"It was one of those perfect English autumnal days that occur more frequently in memory than in life."

Posted by Julia Buckley at Tuesday, October 13, 2009 No comments:

Congratulations to a Fellow Writer

My friend Kathi Baron debuted her first novel today at a lovely signing. Her main character in Shattered is a violinist, so Kathi had a youth violinist on hand to play a beautiful piece that started off the event. A nearby restaurant made delicious chocolate chip cookies, her character's favorite food (and Kathi's), and she did a reading of a couple of chapters before fielding questions from the sizeable crowd.

Here she is posing with some members of the writer's group to which Kathi and I both belong. Her book, Shattered, explores the idea that music can heal. The book jacket says "Teen violin prodigy Cassie has been tiptoeing around her father, whose moods have become increasingly explosive. After he destroys her beloved and valuable violin, Cassie, shocked, runs away, eventually seeking refuge in a homeless shelter.

Written in lyrical prose, Shattered tells the moving story of how one girl finds inner strength through music."

This is a young adult novel written with soul and perception; it draws on Kathi's years of experience as an occupational therapist.
Posted by Julia Buckley at Saturday, October 10, 2009


Here is the magic of You Tube: when some archival footage turns up, it won't just end up in a university library--it will go online and become available to the world.

I recently heard about this rare footage--this only known footage of Anne Frank, on NPR. Anne is seen enjoying the sight of a neighbor's wedding. According to NPR, Anne herself was fascinated by the emerging technology of film; her father had a camera and Anne was learning to use it. She liked the idea of being captured on film, and here, at long last, we can see her.
Posted by Julia Buckley at Wednesday, October 07, 2009 2 comments:

"A few days ago I walked along the edge of the lake and was treated to the crunch and rustle of leaves with each step I made. The acoustics of this season are different and all sounds, no matter how hushed, are as crisp as autumn air."

Ah, books. I'm reading them, researching in them, trying to write them. It seems I just can't get enough.

I'm currently reading MY BROTHER MICHAEL by Mary Stewart and CRIME and PUNISHMENT (again) by Fyodor Dostoevsky. Both are great works and suspenseful mysteries which reference other texts. Stewart, because her mystery is set in Delphi, continually cites the ancient Greek plays: Oedipus, Electra, Antigone.

Dostoevsky, because C and P is among other things a Christian novel, consistently references the Bible, especially the New Testament.

This intertextuality makes a book more interesting to me--more cerebral and culturally connected. It assumes intelligence of the reader. In Stewart's MBM, her heroine stands among Grecian ruins under starlight, convinced that she hears the ghosts of ancient souls, and the words of Sophocles echo through her head. This merely increases the tension of the mystery established in the present.

What are some good books that reference other texts within their stories?
Posted by Julia Buckley at Friday, October 02, 2009 No comments:

The Mystery of Talent

Julie Andrews is 74 years old today. It seems that from the time she was born she was singing, as evidenced by this handy clip. I once saw Andrews in concert, and she is more amazing in person than she is on film--either way she's just about perfect.