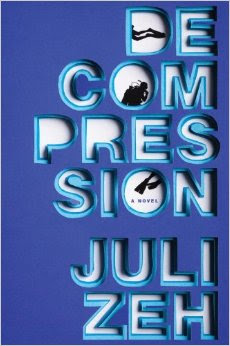 I'm grateful that Anchor Books sent me a review copy of Decompression, Juli Zeh's chilling suspense novel, which won Germany's Thomas Mann Prize and has been translated into English by John Cullen.

Normally I have to throw review copies onto a big pile until I find time to choose one at random, but this one rose to the surface (ironic, perhaps, given that it is all about submerging, both in water and in denial) and I could not resist reading the first few lines. After that I rarely put it down until I was finished.

Zeh's narrator is Sven, a German expatriate who has secluded himself on Lanzarote to teach scuba diving. The island has few people and little vegetation, dominated instead by volcanic rock. This spare landscape seems the perfect place for Sven, who is also rather scant, both in his living and in his narration, and the suspense begins when it is clear that Sven may--or may not--be telling the truth, to the reader or to himself.

The story is continually compelling, but it is not always the plot that drives it, since that was relatively predictable in places. What captures the reader is the power of Zeh's writing, and the profound philosophies that emerge from the thoughts (or sometimes the writings) of her characters.

The theme of escape is layered throughout the novel, starting with Sven's departure from Germany, a country he intends never to revisit. This thought is echoed in a book by one of Sven's guests, a writer named Theodor Hast:


"The tattered sky was hurrying eastward, as though it had something urgent to do there. Emigrate, he thought. But that would make sense only if the country we escape to weren't always and only ourselves."

Journeying means something different to Jola, Theodor's lover and also Sven's guest, whose regular diary entries provide a different perspective from that of her landlord. Her assessment of travel is elemental, profound:


"It's always this way: you travel thousands of miles to sleep less comfortably and understand yourself better."

Gems like these appear throughout the novel, a tribute to Zeh's artistry and to Cullen's precise translation.

Some of the best scenes happen underwater, perhaps the only place that Sven feels truly comfortable, and I certainly enjoyed submerging myself in this book.

The Joy of Books 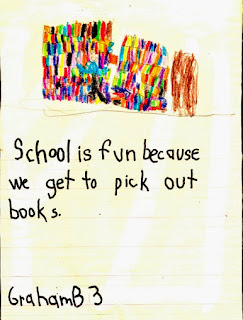 Some of my favorite artwork by  my son when he was in third grade. He was so right--that was the best thing about school for me, too. The library and the Scholastic book orders.
Posted by Julia Buckley at Monday, June 08, 2015