Parker Francis is the author of Matanzas Bay and Bring Down the Furies, which The Kindle Book Review called "intriguing, engaging, and suspenseful." 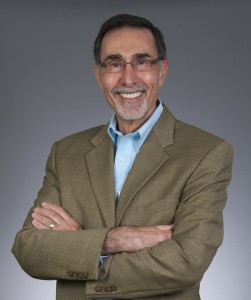 Your title references the Furies, who are mythological creatures of retribution.  Are you a fan of mythology, or just the Furies? :)

In Greek mythology, the Furies were the three goddesses of vengeance. I can’t say I’m a big fan of mythology, but vengeance and justice are themes that play themselves out in my Quint Mitchell books as Quint always tries to do the right thing although he might take a roundabout route to get there.

Quint Mitchell is a great name for a detective.  Is he a fifth son?

Quinton “Quint” Mitchell is actually the first son in his family. In the first Quint Mitchell Mystery, MATANZAS BAY, the reader learns more of his backstory and family history. In that book Quint is in a darker place, carrying a load of guilt that stems from the death of younger brother. But I’m glad you like the name. Writers, as you know, strive to find a name that will resonate with the reader and carry the character through the book.

Quint has a likeable style; he’s hard-boiled, but he has a softer side.  Who are the hard-boiled detectives you most admire?

The hard-boiled detective has been a staple of American mysteries going back to the pulps. Authors I’ve admired, like Dashiell Hammett and Raymond Chandler, brought us Sam Spade and Philip Marlowe. Mickey Spillane followed with his Mike Hammer tough guy series, but I absolutely loved John D. Macdonald, who gave us the Travis McGee novels, which I still consider among the best in the genre. Because I’m a real softie, I wanted to give Quint a softer, more human side and not make him into an indomitable superhero who can whip six men with one hand tied behind his back. This means he makes mistakes once in a while and might have misgivings about the choices he makes. This is beginning to sound like my autobiography.

Haha! One of Quint’s tasks in the book is to catch a womanizing con artist called “The Heartthrob Bandit.”  Is this criminal based on any real-life gigolo?

Ricardo “Ricky” DeAngelis was one of my favorite characters in the book. I’m sure I must have heard or read a news account of a con man preying on older wealthy women somewhere along the way, but Ricky was pretty much born of my warped imagination. I really didn’t envision him playing a major role in the story and used him mainly as a device to get Quint from Jacksonville Beach to Allendale, SC. But once he and Quint met in the first chapter, Ricky became a major subplot while Quint coped with the serial arsonist.

History was one of my favorite subjects in school, so I guess you can say I’m a bit of a history buff. I’d like to think that readers of mysteries are looking for more than just crime and punishment. They want to learn something as they try to solve the mystery, so I like to salt my fiction with historical facts. In BRING DOWN THE FURIES we learn a little about the history of Allendale, and how General Sherman’s troops burned down the original town during the Civil War. Matanzas Bay was set in St. Augustine, Florida, and readers were exposed to some of the colorful and bloody history of the nation’s oldest city. 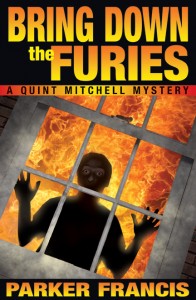 What made you set the story in South Carolina?

After MATANZAS BAY I wanted to move Quint to another location. I also wanted find a setting where archaeology might play a part in a larger mystery, as it did in the first offering. Searching the Internet, I located a listing of archaeological projects in the southeast. That led me to the Topper site outside Allendale, South Carolina where Dr. Albert Goodyear has found artifacts made by the pre-Clovis people dating back thousands of years. Claxons began ringing in my head, and I asked myself what if a Creationist minister feuded with the archaeologist and it boiled over into a tension-filled media circus. Now I felt I was onto something that could explode from a single idea into a longer, more compelling narrative. With more research I learned that General Sherman’s troops had burned down the original town on their way to Columbia during the Civil War. This bit of historical news tripped another set of creative neurons and I decided fire would play a major role in the story. That led to the idea of a serial arsonist at work in Allendale.

In addition to the Quint mysteries, you’ve written books with a feline protagonist in your WINDRUSHER series.  Was it hard to get the cat’s point of view just right?

It was, but having lived for years with a household overflowing with feline critters I had plenty of role models. They were also very strict editors who made sure I got it right. Seriously, though, it was a bit tricky, but once I got inside my protagonist’s head it became much easier. The WINDRUSHER trilogy was fun to write, and I still hear from readers wondering when the next one will come along.

Speaking of cats, your website informs me that one of your own cats, Duke, is quite the critic of manuscripts.  Does he help you polish drafts?

Wow, you’ve really done some digging. Duke has a habit of tap dancing across my keyboard when I’m writing. He isn’t as bad as he once was and will usually settle down in my lap for nap after he’s done his damage. He’s a bit of a bully who keeps the other cats at bay, but he’s really a pussycat at heart.

Will there be more Quint Mitchell books?

Yes there will. The next novel is in development stage (by which I mean I’m still in the daydreaming process) and will bring Quint back to Florida. This one will be set in Cedar Key on Florida’s west coast. Right now I’m readying a short story collection I’ve titled GHOSTLY WHISPERS, SECRET VOICES, containing six surprising and darker stories. This will be available for Kindle readers within the next month or so.

I’m a major consumer of books in any form. I have two “tree books” going right now. The Yard by Alex Grecian, which is a mystery set in Victorian England shortly after Jack the Ripper terrorized London. The other is Laura Smith’s debut novel, Heart of Palm, which won’t be out until April, but her publisher sent me an advance copy. It’s funny and warm and I’m enjoying it. On my iPad Kindle app I’m reading Paul Levine’s Fool Me Twice, a Jake Lassiter mystery, and in my car I’m listening to one of Lee Child’s Jack Reacher books, Echo Burning. I also have a few books on my iPhone that I listen to while working out or pulling weeds from my lawn, which is a redundancy since my lawn is mostly weeds.

If Hollywood made a movie of your book, who would you want cast as Quint? 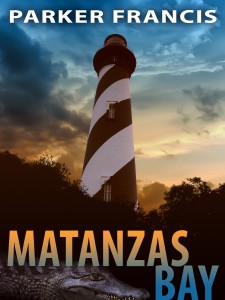 Good question. There are a few who fit my image for Quint Mitchell, including Leonardo DiCaprio, KyleChandler and Mark Ruffalo. If Alec Baldwin was 15 years younger he’d be perfect. But while we’re dreaming of casting actors for my “movie,” how about these other characters: Sheriff Wilburn Peeks plays a major part in FURIES as the tough-talking adversary who gives Quint a hard time for much of the story. Of course, I’d love to see Tommy Lee Jones play the crusty sheriff after seeing his remarkable portrayal of Thaddeus Stephens in “Lincoln.” I can also envision Ed Harris in the role. One more role I’d fill would be Nurse Allene Skinner-Jarrett. Allene plays Quint’s love interest, or perhaps lust interest would be more accurate. She’s a bit of a tease, but exudes sensuality and knows how to push Quint’s buttons. I can picture Charlize Theron or Jennifer Garner slipping into (and out of) her medical scrubs to treat Quint.

You live in Florida.  Will you ever set a book there?
See the answers to the above questions regarding Matanzas Bay and book three in the series. I think Quint will always come back to Florida as long as I’m here to greet him.

Thanks for chatting, Parker!!

Thank you, Julia. I appreciate the opportunity to share with your readers.
Posted by Julia Buckley at Wednesday, March 20, 2013