The World of Raymond Chandler 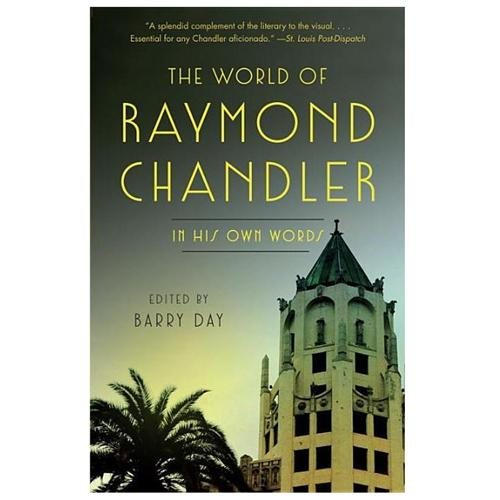 I was excited to find this book in my box this morning. There are Chandler biographies, of course, but Barry Day has chosen to let Chandler introduce himself to the reader--through words he wrote in letters, in books, in essays.

I fell in love with Raymond Chandler's writing in college when I took a detective fiction seminar, in which we read The Big Sleep and "Red Wind." But it wasn't until I taught The Long Goodbye that I realized his brilliance.

Chandler himself suggested that dialogue was his strength, and it was--dialogue so true and clever that it stayed with you long after you closed the book.

My husband and I used to quote a tiny passage of dialogue from The Long Goodbye--an exchange between Marlowe and a gangster named Mendy Menendez. Mendy approaches him, dressed like a card shark but looking a bit more dangerous, and verifies his identity.

This tiny exchange captures Marlowe's personality--and the saucy style of the hard-boiled genre which Chandler helped to create.

Chandler's own life sounds as though it had some of the melancholy that the reader can always feel in Marlowe--the lone moralist in the wicked streets of Los Angeles. Much of his joy was derived from what he created at the typewriter, and the joy came from the actual act of creation, not necessarily from the promotion that followed.

I am looking forward to reading this book and re-connecting with the genius that was Chandler.