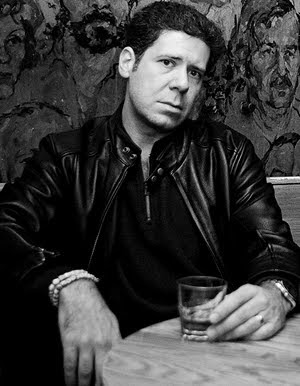 Sean, your first novel, Big City, Bad Blood, has been very well-received. What’s been the biggest learning experience as a result of your promotion of the book?
I’ve been extremely fortunate and I’m grateful for the response the book has gotten from reviewers and readers. It’s been a heady experience and, believe me, I know how lucky I am.

What have I learned about promotion? I’ve learned that touring is much better if you can do it with a friend, that booksellers and librarians are the nicest people in the world, and that the vast majority of people who attend bookstore and library events would rather have a conversation with an author than listen to an author read. I’ve also learned that, at every event, there will be one certifiably insane person in the audience.

That's kind of scary. I’m curious about the name of your protagonist, Ray Dudgeon. In my world (the world of teaching Shakespeare), a dudgeon refers to a holder for a dagger, as in Macbeth’s famous speech: “I see thee still, and on thy blade and dudgeon gouts of blood.” Am I raving here, or were you inspired by Shakespeare in choosing the name?
Shakespeare rocks, and the Scottish play is right up there with Hamlet for me. Ray had a number of names along the way, before I settled on Dudgeon. I like surnames that have independent meanings as words. Some of my favorite classic PIs have names that do double duty by describing the character. Spade, Archer, Hammer. And for some reason I wanted a two-syllable word that started with D. I was flipping through the dictionary, and I hit upon dudgeon. As a fan of the bard, I was familiar the meaning that Shakespeare used – the handle of a dagger – which seemed to fit with Ray’s underlying rage and the violent world he inhabits. And the modern usage of the word also fits. Ray was once a reporter, but he quit journalism when he couldn’t come to terms with the ethical compromises that were being forced upon him. You could say, he left “in high dudgeon.” So I was actually inspired by the dictionary, but the Shakespeare connection was a nice bonus.

That’s not what you meant? Oh, it’s about greed and political corruption and sexual blackmail and murder. You know, all the good things in life.

You were once a private investigator. Did you enjoy the experience?
There were many things about the job that I enjoyed, but even more things that I didn’t. I’m very glad to have done it, and just as glad to not be doing it anymore.

I’ll bet you have a million P.I. stories—what’s one that sticks with you now that time has passed?
I have a few, but to do them justice takes more than a few paragraphs. Actually, the Ray Dudgeon story in the Killer Year anthology (edited by the great Lee Child) is based on a real case I had. The first two-thirds of it, anyway. The rest is completely made up. Real life doesn’t often reach the dramatic heights demanded by fiction.

After you graduated from high school, you worked for an underwater documentary series called The Last Frontier. Is there a lot to document underwater?
Hell, yeah. The ocean is the source of all life on our planet. It is the planet’s womb. Unfortunately, we’re working pretty hard to destroy it. In addition to the ecosystem, there are also all the human relics – shipwrecks and aircraft and so on – which are frozen in time and offer a fascinating perspective on history.

Working on that series was a great joy. Traveling from the Arctic to the Caribbean, diving with whales and sharks and dolphins, living on boats. It didn’t suck.

You have a second Ray Dudgeon novel coming out this year called Trigger City. Are you writing a third?
I’m very excited about Trigger City, and right now I’m in the planning stages for the book tour and promotional effort for that one. I’ve been making notes for a third, but I haven’t started writing it yet.

What are you reading these days?
I just finished Gas City by Loren Estleman, and I’m now reading Bleeding Kansas by Sara Paretsky. Great books, both.

You say on your website that you have a “clever dog and an unusual cat.” What makes the dog clever and the cat unusual?
The cat turns up her nose at shrimp and won’t drink milk, but loves chocolate cake and ginger ale. That’s unusual, for a cat.

As for the dog – I hate to admit this in public but the dog is actually my co-writer. I mean, I write the first drafts on my own, but he polishes my prose before it goes off to my editor. I’d say that’s pretty clever, for a dog.

I wonder if I could trade in my dog for the prose-polishing kind?

You have done a variety of jobs in your life, which is of course the best past for a writer. Once you wrote for a children’s television show called Once Upon a Hamster. Is it challenging to write for children?
It came pretty naturally for me. The narrative structure doesn’t change when writing for children. Sure, the characters I wrote about were hamsters and guinea pigs and turtles and frogs, but that doesn’t really change anything. I think it’s a mistake to try to write differently for children. A lot of children’s shows are condescending as hell, and that bugs me. Kids are smart.

You’ve lived in Toronto, Louisville (Georgia), New Orleans, Columbia (South Carolina), and Chicago. Do you have a favorite place? When you’re in Chicago, do you miss some of the other cities?
Chicago is my favorite place. I hate winter and miss the warm weather of the temperate zone, but other than that, Chicago’s got everything I could want in a city. I love it.

Do you write full time?
Yes.

Do you write non-mystery fiction?
Depends on your definition of mystery. There’s a lot of hair-splitting with all the sub-genres. Mystery vs. Thriller vs. Suspense vs. Noir, and all that jazz. I like the term “crime fiction”, which they use in the UK and which encompasses all the subgenres.

Anyway, I write a kind of noirish mystery-thriller hybrid. Or something like that.

How can readers find out more about Sean Chercover and his Ray Dudgeon mysteries?
My website is always open for business and has a lot of fun stuff on it, including upcoming events, interviews, reviews, and so on. Please drop by and say hello.

Thanks a million for chatting with me, Sean!
Thanks for having me, Julia. It’s been fun.
Posted by Julia Buckley at Monday, February 25, 2008

Great interview. I see Sean and I share a similar sentiment - we're both glad to be out the business of investigation. It's much more fun to write about it!

I suppose that might be true of many occupations. :)

Right you are, Lee! It is much more fun to write about it, and I get to work in my pajamas.

Nobody takes a P.I. seriously if he works in his pajamas.

Look forward to seeing you at Bouchercon.