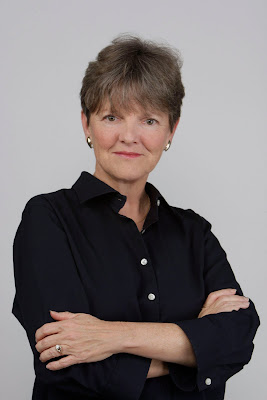 Hi, Deborah! Thanks for chatting with me.

You were a reporter for USA Today, but you “quit the news biz to write mysteries.” Were you thinking that would be a step up in salary? :)

Ha! I never was very good at math.

Seriously, though, what made you want to write a mystery?

I think after 20 years in journalism, I just got tired of all the sad stories and tragedies affecting real people. I wanted to write fiction, and I wanted it to be light.

Your book, Mama Does Time, will soon be on store shelves. You’ve described the series as “Agatha Christie meets My Name is Earl.” That means funny mysteries! Did you laugh while you were writing them?

That really is one of the best things about writing the series, getting a giggle every now and then. Not that writing still isn’t hard work, but I do chuckle when I type a line like, “Mama’s head swiveled like a one-eyed dog in a butcher shop.’’

That's a good one. You live in Florida, and you say that you are writing about a Florida that has all but disappeared. Where did it go?

It’s buried under concrete and asphalt, unfortunately. I grew up riding horses in orange groves on land that’s now all strip malls and housing developments. Natural Florida is still out there, but it’s harder and harder to find.

The “Mama” in question has three daughters: Mace, Maddie, and Marty. How did you arrive on the M motif for your character names?

I only found out after I wrote the book I’d violated a cardinal sin: giving my characters similar names. Oops! Two reasons I did it: Using family surnames as first names is a “Southern thang,’’ and the sisters’ names are shortened versions of Mason, Madison and Martin. (That their names show up nowhere in their own family history is a whole ‘nother story). Secondly, Mama wanted to save money on monogramming.

Mama is thrifty! It seems that while the daughters are bailing Mama out of trouble, they might have some romantic adventures of their own. Do you have romantic plans for all of the girls?

Well, Mace is the only single daughter, so she’s most likely to have romantic adventures (or, in her case, misadventures, since she commonly watches “Cops’’ on TV to check for exes.) But I do have some entanglements up my sleeve for at least one of the other sisters. .

Is each one of the daughters a sleuth, or will one of them take the reins in helping to save Mama from her predicaments?

Mace is pretty much the family sleuth, but her two sisters take more active roles as the series progresses.

How did you come up with this amusing premise? Did it occur to you on a train, the way Harry Potter occurred to JK Rowling?

I was looking through the newspaper one day for short-story ideas (a great writing exercise: use the most basic facts in the paper and expand into fiction by asking yourself the question: What if?) Anyway, I came across this great half-page color ad of an older woman driving a turquoise convertible, eyes filled with mischief, mouth open in a joyous laugh. That woman became Mama, and the roomy trunk of her convertible became the final resting place for the series’ first murder victim.

Hilarious! Mystery writers are always looking for a place to stow the body, aren't they?

You had a Master’s in psychology and were on your way to a Ph.D when you switched to journalism. Why the change?

That’s a long story. Short version: I got bored.

Your husband is also a journalist. How did you meet? Do two journalists always have fascinating dinner conversation?

Hmmm, fascinating conversation … you mean beyond “It’s your turn to clean up. Why do I always have to do EVERYTHING around here?’’

Just kidding. We’ve been married for 20 happy years. We met on a story in Immokalee, Fla., where we shivered at dawn, waiting to see if a rare freeze in southern Florida would kill the winter vegetable crop.

On a different Florida note, you describe your area of Florida as “swimming with mosquitoes.” Are you trying to prevent me from ever visiting there?

I did take a bit of literary license when I wrote that the mosquitoes would carry away a VW bug to get at the people inside. Just bring an industrial-sized container of Cutter (and a Hazmat suit) and you should be fine.

Ick. It looks beautiful in the pictures, but the mosquitoes don't show up on those, do they?

You must have done hundreds of interviews as a journalist. Do you have a favorite, or a most memorable one?

I’ve interviewed politicians, including former presidents (Gerald Ford, Jimmy Carter, George Bush I), and celebrities (Madonna once gave me her tummy-trimming tips). But the interviews that affected me most were always ordinary people in extraordinary circumstances, like families struggling after natural disasters or with the devastating death or injury of a loved one.

On a lighter note, my favorite assignment ever was interviewing film director George Romero, because he cast me as a zombie in Day of the Dead as part of my story. I lurched beautifully.

Wow! My husband would be SO jealous! That's one of his all-time favorite movies.

Your Mama series continues next year with Mama Rides Shotgun. Will you ever pursue a different series, or are you focused on the Mama books for the time being?

I’m still loving my Mace Bauer Mystery series. (Even though Mama thinks she’s the main character, her daughter Mace is the actual protagonist.)

I’m working now on Book 3, Mama Gets Hitched, in which she’s fixin’ to marry Husband No. 5. The wedding has a Gone With the Wind theme, complete with ruffled parasols for her bridesmaid-daughters and a doggy top hat for her pet Pomeranian, Teensy, in his role as ring-bearer. Mace—-tomboyish, no frills—-is horrified, of course.

Oh yeah, there’ll be a murder, too. I did mention my books are not dark, right?

Sounds perfect. :) What are you reading right now?

I just finished a terrific book by fellow Florida author, Prudy Taylor Board. A Grave Injustice. It’s a paranormal mystery, which is kind of a departure for me, but I liked it.

What are your plans for the rest of the year?

Promoting Mama Does Time, laying some groundwork for the Summer 2009 release of Mama Rides Shotgun, and trying to finish Mama Gets Hitched. Somewhere in there, I’ll try to remember the little things, like eating and sleeping.

Thanks so much for the interview, Deborah!

Readers can visit Deborah at her website or they can read Mama's advice column to get a sense of her character's voice.
Posted by Julia Buckley at Sunday, September 21, 2008

Weird to be on the OTHER side of the notepad in an interview, considering I was the reporter asking the questions during a long journalism career. But Julia asked great questions, and she made it painless! Hope some of my interviews over the years could say the same for me!
Thanks!

Thank YOU, Deborah! I like interviews because I learn a lot of interesting things--like your zombie connection. That is truly memorable. :)

The connection of every detail should be explained in argument. The lack of these skills I am supposed to afraid of completing these essays. So this will be great for me to meet my work done. on this site for understanding the details of it.

Not all sources are good for article rewriting. After views, these content maybe it would play vital service and may be I will order service as my requirements. Here is go to site to get vital and effective details.

Though my writing skill is good my paragraph is not enough. I have observed lots of sites to get tricks but not satisfied. The verbose sentence generator is really requisite for my writing to make the sentence longer. https://www.cheapwritingservices.net/cheap-business-plan-writing-services/ finding the review about these apps are also worthy.

This kind of thinking makes the understudies greedy. Guidance should find the opportunity to make yourself a https://www.rewritingservice.net/your-personal-article-rewrite-assistant/ human not make yourself unquenchable. Preparing is only the way in which a man can contact the targets of grandness running on it. There are also the unprecedented…

Truly, the gathering of senior and junior mentors in the school is significant to improve the particular school. Their gatherings https://www.onlineproofreadingservices.net/our-cheap-proofreading-services/proofreader-resume-service/ about the troubles of the school can be productive for the advancement of the school where they instruct.