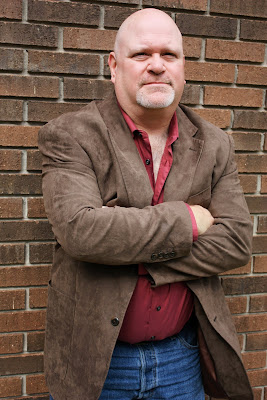 Your new book, The Fallen, has received much praise, and the Lansing Journal suggests that you write “like Lee Child on steroids.” Is this true? Are your books about action first and foremost?

That was a particularly flattering comment from the Lansing State Journal. Well, “action first and foremost,” I’m not sure. But they are very action-oriented and I really have no problem calling Derek Stillwater, my main character, an action hero. I tend to describe them as action-adventure thrillers, although they’ve been called political thrillers and even espionage thrillers.

This book is your third Derek Stillwater novel. Tell us a bit about this character.

Derek Stillwater, PhD, is a troubleshooter for the Department of Homeland Security. His particular areas of expertise are chemical and biological terrorism. He is a former Special Forces expert in biological and chemical warfare. That’s his resume, but he’s a bit neurotic, something of a hypochondriac, has some superstitious tendencies (he believes in luck, both good and bad, wears ju-ju beads, a St. Sebastian’s medal (patron saint of plagues), and a four-leaf clover). He has panic attacks. His parents were missionary physicians, so he was raised on missions in various countries around the world like Congo and Sri Lanka. He lives on a cabin cruiser on the Chesapeake Bay and routinely puts in his letter of resignation, but always comes back when called on.

He lives on a boat; is this an homage to Travis McGee?

Sort of. I've always found the concept appealing, and in my novel, Dirty Deeds, the character of Jack Bear lives on a boat as well. I don't know if I'd like living on a boat or not, but I do like boats, and I think it says something interesting (perhaps it means different things for different people) about the character. There must be something satisfying in knowing that you can just haul anchor and move your home anywhere you want without a lot of planning.

Will Derek be back for a fourth book?

Yes, the fourth book is written and scheduled for September 2011 by Oceanview Publishing. The title is THE VALLEY OF SHADOWS. It takes place over a 48-hour period leading up to election day in November as Derek and a terrorism task force attempt to prevent attacks in Los Angeles that they have intelligence about.

You yourself are a very action-oriented person; when not writing, your website informs me that you “study sanchin-ryu karate, lift weights, bike, run, and kayak.” Would a novel about Mark Terry have an exciting plot?

I seriously doubt it, since I otherwise spend most of my time in front of a computer screen. I didn’t always used to be this active, but since I became a full time writer about 5-1/2 years ago, and my schedule freed up a bit, I started going to the gym and just kept adding other things that I liked to do. I’d studied the American Karate System in college for a year or so and had to drop out when I got too busy. Then life took over. Then about six years ago my kids started taking Sanchin-Ryu. About a year later when my schedule permitted I started going, too. I’m now a first-degree brown belt. The next level is black belt. My youngest son has dropped out, but my wife has started. That black belt is probably on the near horizon.

On your blog you wrote about some recurring “stress dreams.” The first one, ‘the college final exam,’ I’ve experienced before (although sometimes it’s high school). But I’ve never experienced your second one, the ‘writing career’ dream. Can you expand on this one?

Hmmm. Sure. There appear to be two varieties to it. First, it’s probably helpful to know that I worked for 18 years in a cytogenetics laboratory at a major metropolitan hospital. I really didn’t like the job or the work, although for the most part the people were fine. My “day job” now is as a freelance writer—I write magazine articles and market research reports and newsletters and many, many other things, in addition to writing novels (I’m also collaborating on a nonfiction book).

I love it, as a matter of fact, at least as much as the novel-writing and sometimes even more. So my two versions of a stress dream involve, 1) the writing didn’t work out and I had to go back and work at the hospital doing cytogenetics. Ack! And 2) for some reason my wife and I decide to go back to college full-time and I have to look for a job and I typically find myself looking for a cytogenetics job (there’s a lab at Michigan State, where we both graduated). But usually that dream ends with me realizing that I can still freelance write and don’t have to look for the lab job. Our brains are funny things.

Agreed. You live in Michigan. Have you lived there all your life? Have you ever fantasized about living somewhere else?

I have lived in Michigan my entire life and went to college at Michigan State University in East Lansing. And yes, I’ve fantasized about living somewhere else all the time, especially from about the month of November through April when winter strikes Michigan. There are many places I’d like to live, including Texas and Florida, and who knows, maybe someday I will.

You have a dog named Frodo. Does this mean you’re a Tolkien fan, or someone else in your family is?

Well, yes, at least, I’m a fan of the movies. I’d read the trilogy and The Hobbit a couple times when I was in high school. And the films are pretty much favorites. I think it was my sons who named him, though. He’s a very good dog, a chocolate Lab.

Will you be very busy while promoting The Fallen?

Yes. At the moment I’m scheduled for 8 or 9 signings. I’m doing a blog tour for a couple weeks. I did a cable TV interview show last week and we’re still in the process of scheduling some other events and interviews.

What’s the best fan response you’ve received to your books?

I loved your book and I’m going to go out and buy the others.

You mentioned on your blog that Sue Grafton’s I is for Innocent influenced you greatly, as well as a couple of Robert Parker and Stephen King books. What makes Grafton’s letter I novel so influential?

I’ve often thought that “I” is for Innocent was the almost perfect mystery novel. A lot of it has to do with the structure, which is this beautiful three-part story structure. Kinsey is hired to review a murder case for an attorney, and about a third of the way there’s a major reversal, then about 2/3s of the way there’s yet another major reversal, and then it wraps up with a very exciting finale, which is not always the case with a Grafton novel. I just think it’s a beautifully crafted novel that does everything right.

If you have any spare time for reading, what are you reading right now?

Like you, I have two sons, and I find that I borrow heavily from their expressions for my dialogue. Do you ever do this with your own boys?

Not so much. They’re 12 and 16 and I don’t have too many kids in the Derek Stillwater novels. I spent some time the last year writing some books aimed at middle grades, but they never got picked up. They were fun to write, though, and I think I learned a lot, not only about writing for kids, but by writing for kids, probably learned a thing or two about kids in the process.

If you could have your fantasy, what would be an ideal day for you?

In a lot of ways I’m already living it. I get up, take my youngest son to school, come back, walk the dog, then head for my home-office to write for a couple hours. Then I go to the gym or go outside for a bike ride, depending on the day and the weather, have lunch somewhere, walk the dog again, then back to the office. I write for a couple hours, then pick up my kids, then work for another couple hours. Then I’ll have dinner with the family, practice the guitar, write if I need to, hang out with the family or go to a karate class or some other activity like a band booster meeting. It’s a charmed life. Aside from that, I wouldn’t mind being on a tropical island in a hammock with a tropical drink close at hand.

Both versions sound great! How can readers find out more about Mark Terry and The Fallen?

Thanks for chatting with me, Mark!
Thanks!
Posted by Julia Buckley at Monday, April 05, 2010

Interesting interview. Like Mark I sometimes dream of finding myself back at my old job. Talk about a nightmare. But I'm sure Mark is never going to actually find himself back in the lab, except maybe to research a new novel!

I dream of being back in my bookstore job; we had a rotating schedule and I have nightmares that I've read it wrong and have missed whole weeks of work.

Mister Mark Terry is involved in the main whole for the discussion. The shape of the discussion and on this page has ben marked for the humans. The announcement is done for the paths and patterns of the contentment for the individuals.

That is another way to enjoy your life because not everyone has the privilege to do so and www.writingtips.info/some-great-nursing-graduation-speech-ideas/ here provides you the courage tom solve the problems and live a new life for you.

IF you had the experience of living somewhere else in the world so you would have grabbed that opportunity they have created for you as explore the details is always there every where and the skille dpersons are welcomed by the authorities as well to overcome the problems we might have in our future.

A worthy subject which is so much difficult tosum up in a single video. There are many interesting site web facts which are so exicting and fun to know Many thanks for good share.

i really like parties and party stuff and by looking at your blog i was enjoying all of your stuff great resource .The thing i liked most is u have provided different kinds of packages which is very economical. This blog is very beneficial specially who wants to make thier marraiges like a dream comes into reality. Keep looking for new stuff.