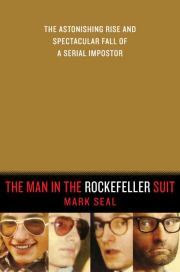 I just finished THE MAN IN THE ROCKEFELLER SUIT by Mark Seal. It explores, in great detail, the story of Christian Gerhartsreiter, a German immigrant and con man extraordinaire, who lived under a progression of pseudonyms among America's powerful and wealthy. Gerhartsreiter used some sort of alias from the early 1980's until his arrest in 2008, and he fooled many intelligent people into believing his illusions--including, perhaps, himself.

Some of the reviews on GOODREADS express disappointment with Seal's book, claiming that it doesn't reveal anything about the real Gerhartsreiter and his motivations. But that's exactly why Gerhartsreiter remains a compelling mystery, even to Seal, who researched the elusive con man and his trail for YEARS and still came away knowing the facts and little more. Seal admits as much up front, saying that the book is based on court records, testimonies, public documents, and interviews. It goes without saying that one would finish a book like this with a whole lot of questions--that's what makes the book (and Gerhartsreiter) so fascinating.

"Clark Rockefeller" is not the first con man who fooled a whole lot of people who should have known better. Leonardo DeCaprio made Frank Abagnale's story famous in CATCH ME IF YOU CAN, and if one were to Google phrases like "famous American con men" one could encounter a whole list of people who told big lies and got away with them. The biggest question, for me, is whether this lying is a compulsion--an almost biological need that makes the quest for fame or money secondary to the satisfaction of having lied.

I hope to ask my questions to Mark Seal himself in the near future; I'll keep you updated on this blog.
Posted by Julia Buckley at Tuesday, May 24, 2011