The Nuances of Genre 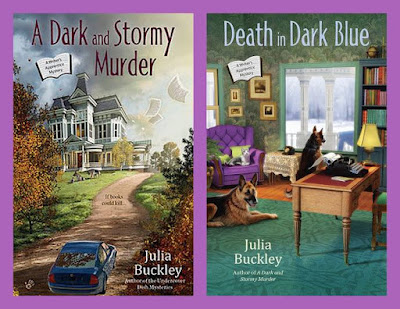 I currently have two cozy mystery series on store shelves. They have both been generally well received, but some readers have expressed dismay that one series (which begins with the book A Dark and Stormy Murder) is not a traditional cozy. The book and its sequel, therefore, disappointed them.

This is fair; the traditional Classical mystery which eventually birthed the "cozy" genre does have certain distinctive features. Because writers are creative and like to put their own spin on things, however, there are diverse definitions of cozy these days, and genres have formed within genres as authors seek new territory and topics that haven't been mined by others.

These books in the Writer's Apprentice series have many cozy elements; small town, "cozy" relationships between characters, an isolated setting, picturesque scenery, a romantic entanglement, cute animals, and a "cozy" occupation for the main characters (writing).

In addition to being cozy, though, the books were meant to be an homage to the great romantic suspense novelists of the mid-twentieth century, particularly Mary Stewart, Phyllis A. Whitney, and Victoria Holt. Elements of the Gothic have been woven in as a part of this tribute, and so some people were disappointed to find that the books felt more like romantic suspense than like cozy mysteries. Other readers never noticed any deviation from the cozies they've read in the past; I think it all depends upon the reader's focus and criteria.

In any case, writers can only write their vision and hope that people enjoy the story that emerges. There will be at least one more Writer's Apprentice novel, and it will continue the romantic suspense tribute-based style (the final book is dedicated to Victoria Holt). The next book, a culmination of the story that has been building over two novels, will be titled A Dark and Twisting Path.