After the success of the Writer's Apprentice novels, I wanted to try something else in the cozy-Gothic vein. Soon enough I had dreamed up Castle Dark, the unlikely castle set in the middle of a rural Illinois suburb. I didn't want to have to feign knowledge of some European setting, so I brought the castle and characters to a setting I know well.

Under the name Veronica Bond, I have written two Castle Dark mysteries: Death in Castle Dark, and Castle Deadly, Castle Deep. The latter will hit bookstores on July 5. I've explored some of the Gothic tropes in a fun way, not delving into actual Gothic horror, but keeping some suspense in the halls of Derek Corby's castle. The series follows the exploits of a theatrical troupe that performs murder mystery scenarios for paying guests. Sometimes life imitates art . . . . 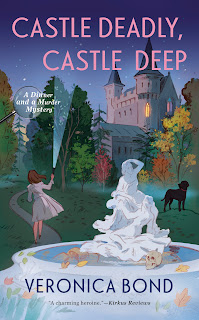 The castle dog, Hamlet, is very much based on my own dog, Digby, who is large and black and potentially intimidating to strangers, but who acts like a gentle puppy around us.

You can meet him and a whole cast of fun characters in the Castle Dark "Murder and a Mystery" series.