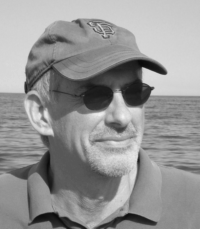 Keith, thanks for chatting with me! Your book, Dot.Dead, came out this year. What lessons have you learned since the publication of your first mystery?
To appreciate the female reader. When I stand in a bookstore with a tabletop of books to sell, about 75% are purchased by women. Men come into the bookstore and head over to the nonfiction areas like science, business, sports, history, and biography. Women make a beeline for fiction. As Ian McEwan has said, “When women stop reading, the novel will be dead.”

Good for both of you. You spent twenty years working for “high tech companies, big and small.” Did you like working in Silicon Valley?
Starting my own company, building it up to success, working with an enthusiastic team – wow! That was terrific even if it transformed me into a monomaniac. At times, though, I have found myself tied up like a dogie on the range in the bureaucracy of larger companies. In those cases I just remind myself – like a caveman of yore going hunting mammoths with a club – that I am doing it to feed my family.

The name of that company was UpShot Corporation, and in 2003 you sold it. I think we all want to know: are you as rich as Bill Gates? :)
There’s a great Talmudic saying which I have hanging on the wall in my office that asks the question “Who is a rich man?” and answers it by saying “The man who rejoices in what he has.” By that criterion, I am a very rich man indeed.

You are wise beyond my understanding. :) What’s the premise of your mystery?
Ian Michaels is a Silicon Valley hotshot. One lunchtime he comes home to find a young, beautiful woman stabbed to death in his apartment. Gwendolyn Goldberg was a stranger to Ian, but her family, old boyfriend, and the Palo Alto police seem to think they were lovers. He waits for the police to start looking for the killer, but realizes they are building a case against him. It’s up to him. As the investigation heats up, so does Ian’s interest in Gwendolyn’s sister, Rowena. By the end of the book, Ian realizes that there are far more important things in life than stock options and business success.

What are you writing now? Is it another Silicon Valley tale?
Way back when, I was counsel to U.S. Senate Intelligence Committee where I worked on anti-terrorism legislation, reports, and such. That’s a rich vein of literary ore to mine. Currently, I’m working on revising a book called Coup, where a Stanford history professor is called back to D.C. to work for – what a coincidence! – the Senate Intelligence Committee.

You have a wife and four children. That’s a fairly big family by today’s standards. Do you find yourself torn between work, book promotion, and family time?
Is it a big family? I know people who have told me they’re only having two kids because they live in a three bedroom house and want the kids to have their own bedrooms. Then I ask them who their favorite person is. Usually it’s a grandparent. Then I ask if that grandparent had his/her own bedroom. “Oh, no,” they laugh. “She grew up with seven siblings in a two-bedroom flat on the Lower East Side.” Typically, they don’t even notice the incongruity. Well, enough ranting on that.

I started a software company. That was all-consuming. I worked long hours six days a week (taking Saturdays off). On the day I signed the papers to sell the company, I got home at noon or so. My then 5-year old said, “Is it bedtime already?” (I have a good time in Dot Dead making fun of the fanaticism endemic to start-ups.) My current schedule is a lot easier than that was.

Your website tells me that much of your novel was written at “the crack of dawn.” Are you an extremely disciplined person?
Disciplined? I don’t think so. I do my writing at a café where there’s no WiFi so I can avoid the tempting diversions of email and the World Wide Web. Goal-oriented? Definitely. My objective was to get Dot Dead written and then published. I put the manuscript away when I started my company, but came back to it. Then after finishing it up, I queried dozens of agents before finding Randi Murray. I met Jackie Winspear at a Left Coast Crime; she’d worked with Randi and told me, “Don’t worry. Randi will find the right publisher.” And so it proved.

Growing up, you watched “local orchards and dairies replaced by tilt-up buildings filled with software engineers.” How did you feel about that? Did you see it as an inevitability?
In Dot Dead, I take an impish delight in contrasting the way Silicon Valley was when I grew up and how it is today. As an entrepreneur, I certainly have been a beneficiary of my hometown becoming the focal point of the world’s high tech industry. Still the changes are definitely not all for the better. When I went to Palo Alto High, the parents of classmates included school teachers, custodians, and shop owners, not just the venture capitalists, executives, lawyers, and doctors who are the parents today. Back in those days, we left our front doors unlocked. My mother dried apricots in the backyard every year. In fact, the old nickname of what’s now Silicon Valley was “The Valley of Heart’s Delight.” I can’t help missing those days and wonder why Silicon Valley should end up here, in the midst of some of the world’s most fertile farmland. Still, I feel awfully lucky to have grown up in the “good old days.”

Your protagonist’s name is Ian—a very cool name which I chose for my first-born. How did you go about naming your sleuth?
My mother said she wanted to give me a name unusual enough so that when she called me for dinner, I was the only one who showed up. That’s how I myself ended up with a Scottish first name. If it was good enough for me, I reckoned it was good enough for the protagonist of Dot Dead. When it came to the murder victim, I played around a little with the incongruity of a Celtic first name and a Jewish last one and named her Gwendolyn Goldberg.

Your plot begins with sort of an homage to some of the classic mysteries: a beautiful woman is found dead in a man’s bed. Are there any writers in particular who inspire you?

Besides that woman who wrote The Dark Backward?

Your flattery is most effective.

More than the books of any writer, I think the films of Alfred Hitchcock provide inspiration to me. You know, there’s some poor shmo blithely leading a middle class life when out of nowhere he or she gets caught up in a spy ring or a murder mystery. We have this ordinary person --played most often by Jimmy Stewart, but also by Robert Donat, Teresa Wright, and even Cary Grant -- who is confronted by an extraordinary challenge and has to raise his/her game and become heroic. That’s what I tried to capture in Dot Dead.

Stuart Kaminsky describes your hero, Ian, as “befuddled.” Is this a plot device, or just a way to make your character seem more human?
Ian had never been a suspect in a murder before. It would be a little unlikely for him to discover that he has an inner Jack Reacher. So of course, he’s confused just like one of us would be.


What’s an average day like for Keith Raffel?
Roll out of bed. Do some push-ups, 33 minutes on the exercycle while I read the Journal, Times, and Mercury, then eat breakfast, and drive to the office listening to a book on tape. At the office, go to meetings, talk on the phone, write memos, and answer e-mails. On the way home, stop at the local café and get in two hours of writing. Then dinner, spend time with the kids, read to my eight-year old (now in the midst of Peter Abrahams’ Behind the Curtain), read on my paisley armchair for an hour. If I haven’t fallen asleep reading, stumble into bed. Next day, the whole thing over again, just like Groundhog Day (one of the best 10 movies of the last quarter century).

Groundhog Day was very existential. And I admire the push-ups. I’ll have to try those. In case you didn’t notice on my blog, I invited you to lunch with me in Chicago. Will you ever be touring in this part of the world?
I’m a native Chicagoan (a Northsider, for those who care about such things). When I was a boy and student and went back to visit, I would be overwhelmed by grandparents, aunt, uncle, and cousins. Last time I was in Chicago was for a relative’s funeral. They’re all gone, either passed away or moved away. It’s kinda sad. Lunch with you though might be just the draw I need to get myself back there.

Okay, then. What are your hobbies, aside from buying and selling software companies?
I used to love betting on the horses. In fact I supported myself that way for six months – pre-wife, pre-kids, pre-high tech job, pre-writing. Who has time now? I read, I write in my “spare” time. That’s it. Oh! One more thing. I love going to a few mystery conferences a year. They’re sort of like summer camp for adults.

How can readers find out more about Keith Raffel and his mysteries?
Like you, I have both a website (www.keithraffel.com) and blog (www.keithraffel.typepad.com). It would be great to have people stop by the blog and leave a comment. Sometimes I think I’m just talking to myself there. It’s nice to have company.

In space no one can hear you scream. :)

Thanks for chatting, Keith!
Posted by Julia Buckley at Thursday, February 22, 2007

Some people said those copy writings are so easy to do but you can do it with the help of them http://www.punctuationcorrector.net/check-my-punctuation-online-free-tool/ and using their checker which will help.

It is so important to maintain all the things of writing and you need to check those commas and so much necessary kinds of stuff there in this site http://www.commacheck.net/10-ideas-for-a-comma-placement-check/ which help you up there for your need.

Lovely interview!! This author is really inspiring the readers a lot. This is the way you can view now about latest collection of books and novels.

This tool is really commendable view now because it works accurately without you have to worry about grammar, spelling and vocabulary.