Thomas Caplan on Loving the Mediterranean, Admiring Fitzgerald, and Eating Spaghetti with Clinton 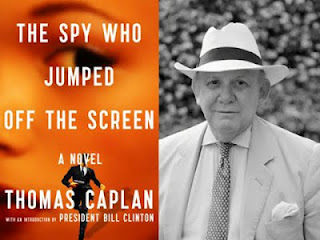 Thomas Caplan's new novel, available now, is THE SPY WHO JUMPED OFF THE SCREEN. It follows the adventures of Ty Hunter, who is both an actor and a spy.


Thomas, thanks for agreeing to an interview!

You went to college with Bill Clinton. Did you ever order a pizza with him? :)

Yes, but the real competition in our house was over who made the best spaghetti. I preferred mine, which was based on a Lawry’s packet, to any of my roommates’.

Your novel’s hero, Ty Hunter, has been compared to Jason Bourne, and you reference the filming of The Bourne Ultimatum in the book. Are you a fan of the Ludlum novels (or the movies loosely based on them)?

I am a great fan of the films, whose speed never seems to be achieved at the expense of story, drama or character.

I agree! In your mystery, Ty relates that “every actor ha[s] an inventory of smiles.” This reminds me of Aristotle’s theory that the rhetor (or speaker) changes faces with each new conversation. Do you think that actors are generally insincere, or are all people so? Or does it just suggest that humans are naturally manipulative?

It depends on the moment, doesn’t it? But that’s a fascinating question. Acting, like writing fiction, is an acceptable form of lying. In real life, however, most of the actors (like most of the writers) I’ve known have been anything but insincere. If they are capable of narcissism, they are equally capable of extraordinary empathy. I enjoy their company and respect their passion.

Yes, although in short bursts. I have never lived there. I suppose the enchantment Ty feels derives of my own. The Mediterranean is not only the cradle of civilization, it is simultaneously a unifier and boundary-marker of modern cultures. It is also magically beautiful and, like any great sea, willful. Its temper can turn on a dime.

As an actor and former military man, Ty is in many ways the perfect choice for a spy. Do you think all good spies are good actors?

Not all. There are many kinds of spies, of course. But acting aptitude would be helpful to if not a pre-requisite for someone doing the kind of work Ty Hunter does, going undercover at the highest levels of deceptively polished conspirators.

I like that phrase "deceptively polished!" An Italian character named Isabella mentions her love of F. Scott Fitzgerald and “the breezy, innocently sophisticated Americans who filled his fictions.” Do you think that Europeans view Americans, in general, as self-deluding?

Isabella has an Italianate name and works in Rome, as a designer of fashionable jewelry in a famous house, but she is English. Again, you raise an interesting point. I don’t think Europeans regard us as self-deluding, but suspect we sometimes strike them as rather casual about things they consider important – correct form, for example - as well as too tightly wound up about things they are inclined to consider more frivolous.

Are you also an F. Scott Fitzgerald fan?

Oh, yes indeed. I have been since I read This Side of Paradise at the age of nineteen. The Great Gatsby is my favorite American novel, but then that’s true of many writers. Only people who have tried over and over again to do it know how hard it is to create prose that seems so utterly without effort.

Ty Hunter is briefed on the protocol of how to greet the Queen of England. Did you need to research this, or have you met the Queen?

There is a lot of advanced technology in this entertaining spy game. Would you say that you yourself are technologically adept?

I am forever struggling to become so. The kid in me loves the stuff!

What are three of your favorite books?

The Great Gatsby (as mentioned above)
Dr. Zhivago
A Coffin for Dimitrios

Ty Hunter’s next adventure. It begins on a different shore.


Where can readers find out more about you and about THE SPY WHO JUMPED OFF THE SCREEN?

Thanks for asking. My website is thomascaplan.com. It’s brand new and full of such information. There are also Facebook pages for both Spy Who Jumped off the Screen and Ty Hunter.

Thanks for chatting, Thomas, and good luck with your book!

Labels: The Spy Who Jumped Off the Screen, Thomas Caplan, Ty Hunter

Great interview with Caplan! Im excited to hear him this weekend on my favorite radio show, The Book Report. Host Elaine Charles does a wonderful job with the show, providing me with insight as to which books to read next. You can find out more at www.bookreportradio.com