Michael Allen Dymmoch on How She Became a Mystery Writer, A Blogger, and a Student of Life 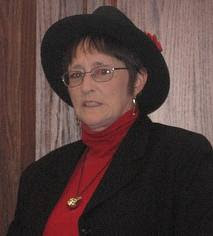 Hi, Michael. Thanks for chatting with me. Of course I have to ask this first: How many people, when meeting you at signings, say, “But I thought you were a man?” Do you ever feel a kinship with George Eliot or George Sand?
“I thought you were a man.” or “You’re a woman!” used to be common reactions. I guess the word is out because I rarely get that anymore. I don’t know enough about George Elliot or George Sand to feel much for them. I majored in science and came late to literature, and I have to confess that I’ve only read one book by Eliot, none by Sand.

Your current book is Death in West Wheeling. What’s it about? Do you have other books set in West Wheeling?
Death in West Wheeling is a police procedural complicated by a Chinese fire drill. Homer Deters, the protagonist, is a well trained law enforcement officer, but his investigations tend to be hindered by eccentrics and events beyond his control. I hope readers will find the story amusing.

Everyone loves a good eccentric character! Library Journal said of your first book, The Man Who Understood Cats, that it “shines with unexpected talent.” Why do you think they didn’t expect you to be talented?
Maybe most of the first novels they get are written amateurishly or poorly edited?

You have four novels with cat references in the title (well, two are cat, one is “tiger,” and one is “feline.”) Do you like cats? Is there a significance to the repeated theme?
Actually all of the books in the John Thinnes/Jack Caleb series were submitted with cat titles. Incendiary Designs was supposed to be called Cats Burning (no actual cats were injured in the production of that story) but St. Martin’s refused to publish it under that title. In those books, cats are a metaphor for detectives, who have a great deal in common with feline hunters.

Cool. What made you start writing mysteries? When did you start?
Just for the hell of it, I took a screenwriting course and had to write a screenplay about something. I’d seen a bad police/buddy film and decided to try to write a better one. That became a screenplay for The Man Who Understood Cats, which no one in Hollywood would look at. On Barbara D’Amato’s advice, I novelized the story and entered it in the Malice Domestic contest. After the story won the contest, my editor asked if I was going to write a sequel. What can you say to that but “yes”?

Good for Barbara D'Amato! And now I’m dying to know what the bad buddy film was. You can tell me at the next MWA meeting. :)

You blog with some other big-name writers at The Outfit: A Chicago Collective. How did you happen to start this blog?
I was lucky enough to be a friend of Libby Fischer Hellmann’s. She wanted to start a blog, but didn’t want to have to update it too often. She decided to join with other writers so we could all benefit from blogging without taking too much time out from out real writing jobs. Libby graciously asked me to join, and had the connections to convince the others to participate. I’m honored to be with Libby in the company of Sara Paretsky, Barbara D’Amato, Sean Chercover, Marcus Sakey and Kevin Guilfoile, great writers all.

That is good company. When you’re not writing mysteries, what do you like to do?
Life has too many wonderful diversions—dinner and great conversations with friends, movies, plays, TV (on DVD), the Art Institute, The Field Museum, Millennium Park, the El (fantastic for watching people as well as for getting around). I’m also a compulsive recycler and enthusiastic (if unskilled) gardener.

What other interesting jobs have you had?
I’ve worked in a veterinary hospital, a medical research lab (briefly!), a print shop, a library, and as a truck and snow plow driver, babysitter, newsletter editor, and recycling center volunteer. I’m not sure any of them was interesting, but unless you’re brain-dead, you can learn something from everything you do. And the wise (wo)man takes power where it’s offered.

You are a very wise woman, and I am learning from you!

What are you writing now?
I’m currently working on another stand-alone novel, and a sequel to Death in West Wheeling.

Whose mysteries do you like to read?
Where do I start? I have 1500 mysteries in my personal library. I tend to prefer police procedurals like Homicide 69 (Sam Reaves) and the darker stuff like God Is a Bullet (Boston Terran) or Rain Fall (Barry Eisler), but I adored The Book of Lost Things (a fairy tail for grownups by John Connolly), and crazy stuff like 47 Rules for Highly Successful Bank Robbers (Troy Cook) and Dirt (Sean Doolittle). And I couldn’t put down Nancy Pickard’s The Virgin of Small Plains. My main criterion is that the book be well written.

When friends of yours come to Chicago, where do you like to take them? What Chicago sights are not to be missed?
A Chicago River boat trip, sightseeing on the free downtown trolley, The Field, Navy Pier (which has a great, free, stained glass museum), The Art Institute, Harold Washington Library, a drive up Lake Shore Drive, The Chicago Botanic Garden (in the north suburbs), one of our great restaurants...

How can readers find out more about you?
The Outfit will be appearing at the Harold Washington Library on August 7 as part of the “City of Big Readers” program (June 1 to August 30). Come and introduce yourself. Or visit my website MichaelAllenDymmoch.com
Or read my books.

Sounds great. Thanks for chatting, Michael!
Thank you, Julia.
Posted by Julia Buckley at Wednesday, May 09, 2007

You really have missed out on not reading George she was a great writer who told it like it was thru her books George Sand tells storys that put the women on an egual footing with men, she was the first real lady to change the way she wore her clothes . she wore mens pants, hats, and everything manly and when she need to be a lady she new how to dress I have read 30 novels and her auto Biography and 3 from other writers and I tell you read her first book Indiana and if that don't get nothing will. I hope you all will try George Sand you won't be sorry

Okay, Arthur--you've convinced me. Indiana is a great title, too. Because I'm midwestern, just the state name is very evocative for me. :)

I think, each country's flourishing relies upon getting ready and the propensity of direction among the youngsters. The likelihood of on this site society's improvement will go to the accomplishment after the arrangement of young people of the general populace.

I am solid of those things for the educators which are advantageous for their understudies like the social event of teachers about issues. They ought to sit together least twice in a month to elucidate the major and visit this page little issues of their school.