How We Failed Amelia 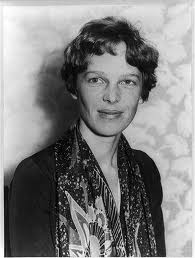 I've always been fascinated by the disappearance of Amelia Earhart. As mysteries go, it's certainly in my top ten of the interesting and unsolved, and I've always rather romantically connected it to the notion of the Bermuda triangle (which has been thoroughly debunked).

Friday I was listening to The Story with Dick Gordon, a show on NPR that I greatly enjoy, and he was discussing Earhart and the fact that she may, in fact, have survived her plane trouble, landed the plane, and sent distress calls, and that one fifteen-year-old girl, way back in 1937, recorded the distress signals that she heard that day on her father's short-wave radio.

The girl, Betty Klenck Brown, is now in her eighties. In an interview with Dick Gordon, she said that she recognized the voice of Amelia Earhart that day. Earhart had already been missing for a couple of days, and Brown knew that. Because Earhart was a celebrity and a hero to women and men alike, much of America knew the sound of her voice from recorded interviews. Therefore, Betty knew that the distress calls were real and important, and for three hours she wrote down everything that she heard.

Her father eventually came home and heard a bit, too, and he went to the Coast Guard (they lived in Florida) with the information (although NOT with Betty's notebook, which I find regrettable) and was told that everything was being handled and his input was not needed.

Betty was not believed, and I suppose as a young woman in 1937, she didn't have a lot of resources to tap in an effort to help Earhart and her navigator, Fred Noonan (who Betty describes as being "out of his head.")

Ultimately Betty's notebook, with its valuable information, simply became her burden, because no one wanted it and no one believed her. (You can view the notebook, Earhart's route, pictures of Betty and a film of Earhart's last takeoff at The Story).

What bothers me the most about this story is that anyone in charge would discount what seemed like such valid information, and that they wouldn't at least ask to see the notebook, which could have told them the frequency on which Earhart was broadcasting. In other words, based on hearing this story, I think that Amelia Earhart heroically landed her plane when it developed problems, radioed for help over several days, and never received it, and probably died on a small island in the South Pacific.

I love knowing the solution to a mystery, but this one is not satisfying, and my obsessive mind keeps thinking about what would have happened, what could have happened, if people had merely opened their minds to the possibilities.

Today the police, the FBI, the coast guard, often turn to the public and ask for help in solving crimes and disappearances. They set up tip lines and offer rewards. I wonder why this couldn't have been the case with Amelia Earhart, and why no one thought that one girl's precious notebook was worth examining.
Posted by Julia Buckley at Sunday, August 26, 2007

This is really fascinating. Surely someone will write a book about this. I've always loved these unsolved mysteries. Thanks for sharing on this topic. Really interesting.

Oh, me too, Kay, and I can't stop thinking about it! It's just so horrific, thinking of her trying to stay by that radio and attempting to get help. Even in 1937 I have trouble believing there weren't ways to try to intercept that signal, or at the very LEAST to listen to the people who said they had!

I hate it when I miss something good on NPR! It will be interesting to see how they interpreted the notebook - if the numbers recorded let them right to the island, for example. Thanks for sharing this!

I do, too, Liz, and I rarely get to listen--but if you click on the link you can listen to the whole interview on your computer speakers, which is a handy feature.

I'll be interested in hearing more info about this as the studies go on.

I just found you via Kay's blog, and this entry is fascinating. It makes me think that those in power did not want her found. I don't know much about her or her politics, but it sure makes me wonder if maybe, just maybe, someone(s) wanted her dead.

I don't know. Stuff like this really does bring up the conspiracy theories, though, because you just start to think "What if" in a million different scenarios. As a control freak, I find it crazy-making. :)

Thanks for posting this info, Julia. It was fascinating and sad at the same time. The fact that the information was disregarded at the time does make one wonder about whether the government did want to keep people from knowing about the flight, whose actual purpose some people have said was to check on the activities of the Japanese in the region. Thanks again.
Margaret

I guess that's why we mystery lovers find it fascinating.

Although I'm fully ready to believe that she just developed plane trouble. There's a video you can view at THE STORY that suggest something might have happened at take-off.

Thanks so much for posting this...I heard Betty Brown's story on the radio when it was broadcast but couldn't rememebr the name of the NPR show to save my life. I wanted to share it with another friend who has always been fascinated by the Amelia Earhart mystery, and thanks to you I found the My Story link. The hair stood up on the back of my neck when I heard it in Betty Brown's own words and how she's been carrying around the burden of knowing what happened to Amelia Earhart all these years but of being unable to get anyone to look at her notebook until now. I was so happy for her when she says her sleep is no longer disturbed by hearing Amelia's desperate voice. OMG what a thing for a 15 year old to witness!

Marinda, it really stayed with me, too. And it was a mystery that I'd always found compelling, but now--? I just hate the thought of her trying and trying and eventually having to face a terrible fate.

I'm glad I could supply the link for you! I really enjoy The Story.

This story about Betty writing down the transcripts of Earhart's last radio broadcasts was just re-broadcast yesterday 8/6/08 on NPR between 1-2PM ET.

Thanks! That explains all the extra hits I'm getting today. :)

It was rebroadcast today oct 23rd 2009. It was great to find your writing. I want to read more on Betty Brown!

Thanks! That was a really thought-provoking show.

I heard the rebroadcast tonight (Oct 23, 2009). I guess it was timed for the release of the biopic. It's unfortunate (but unfortunately, not surprising) that a 15 year old girl was not believed. But what I find difficult to understand is that many others around the world (and in particular, all those Navy radiomen across the Pacific) did not also receive the same transmissions. Lots of people had short wave radios in those days and the whole world new she had gone missing. Strange....

Yes--on the one hand you could understand why one girl's word might be discounted. On the other, she had those striking details.

It's compelling because it's the unsolvable puzzle.

Horribly sad, but I can't quit thinking this would make one HECK of a movie! Can't you imagine it? I'm surprised nobody's done it yet!

They just made that movie with Hillary Swank, but I guess it wasn't a very good flick.

I think its horrible that nobody believed her. Poor Betty and poor Amelia. She was sending distress signals and battling rising tides to try to call for help and she eventually had to give up. I cant imagine what was going on in her head as she was running out of fuel and then sitting on the island hoping that someone would find her. I hope that we do eventually find out what happened to her.

And it seems so odd that no one gave the theory any credence when two people's lives were at stake.