Booksigning Number Three, And It's Official: People Really Do Judge Books By Their Covers 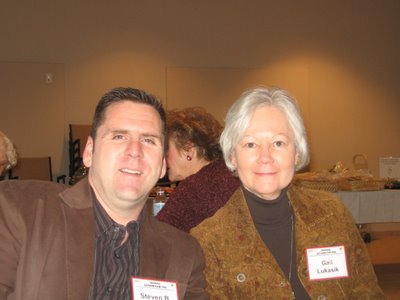 Today I went to the Annual Joliet Author Fair in Joliet, Illinois, at the Black Road Branch of the Joliet Library. The staff, including my contact, Nancy Martinez, were very warm and welcoming, and each writer had her or his own little station for bookselling. Above are Steve Mandel, who I recently interviewed on this blog, and Gail Lukasik, two other mystery writers who were selling about as many books as I was when we all took a lunch break--zero.

Below is Shane Gericke; his mystery has reached bestseller status, but he had only sold one book in two hours. 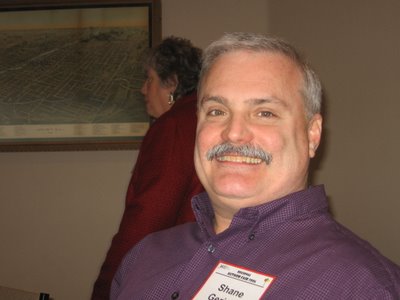 We discussed this phenomenon, and why it might be that people weren't buying mysteries. (Books on angels and happy little towns a la Jan Karon's Mitford series were selling quite well). We wondered if perhaps we had chosen the wrong genre, and should perhaps be writing about angels, except that none of us necessarily had anything to say about those celestial creatures. Gail mentioned that her book title, Destroying Angels, actually offended one library patron, who chided Gail for her choice and said she hoped that angels weren't shown in a bad light in the book. Of course the book isn't about angels at all; it's a mystery, and the title refers to poisonous mushrooms.

In my case, I was hampered at least partly by the cover of my book. Here it is: 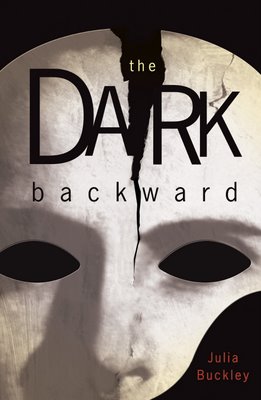 While most people find this cover striking, even beautiful, today's mix of people for some reason found it daunting. Some moved quickly past me, saying "I don't read scary books." I would try to call after them, "It's not at scary as it SEEEEEMS!" but they were gone. I had a dish of candy that many people, children and adults, took the liberty of stealing while grinning slyly at me, obviously not interested in my book or, as far as I could tell, any of the books in the library. It made me wonder why they had come.

One woman stopped in front of my table and said, "Oh! My daughter would LOVE this book! I'm going to call her so she can buy it!" She hadn't picked it up or read any of the material describing the book. She only looked at the cover from a distance. I said, "It's a mystery--" and she interrupted me, saying "Oh, I know! My daughter LOVES books like this. She's a member of this club called The Cemetery Club, and they get books every month: Stephen King, Dean Koontz, people like that."

Horror writers, I wanted to say, but many of my visitors didn't seem to distinguish at all between horror and mystery, and none of them really wanted to hear what I had to say about it. The people who did ask questions seemed to do so out of a perverse desire to make me talk; then they'd nod and walk away. It was an odd experience, to be sure.

Still, it was nice to meet Nancy and see some of my fellow authors that I hadn't seen since Bouchercon or, in the case of Shane and Gail, had never met before. And next time I'll know to have some sort of little typed slip describing my book in a paragraph, so that when people look at the cover and say, "Oh, I know what this book is about," I'll say "No you don't," and press the text into their hands.
Posted by Julia Buckley at Sunday, November 05, 2006

"The people who did ask questions seemed to do so out of a perverse desire to make me talk; then they'd nod and walk away."

Tormenting the author. Like poking sticks through the cages at the zoo perhaps?

That is a great cover though!

You know Eric, it really was like being in a zoo--but it's the first time a signing felt that way, and it was just a result of the particular cluster of people that came past me. Sort of a random variation.

I'm not sure authors faires are the best place for genre fiction, with the exception of romance. I've gone to a number of authors faires over the years, and find they heavily represent of angels (as you saw), self-published memoirs, and romance. And the buyers seemed to be going for that stuff. I've seen mystery writers at authors faires, but they seem to get little attention. Same with SF writers. Forlorn, alas.

I'll probably do any local authors faires, but don't have high expectations for them.

No joke, Bill. I shall learn from each signing, I guess.

But you, now, Grasshopper--you will soon go out into the signing world and make your own decisions. :)

Julia Buckley said...
This comment has been removed by a blog administrator.
3:02 PM

In the end, I feel like anything we can do, within reason, has to help. We can't do everything, and I certainly wouldn't suggest anyone exhaust themselves with appearances. But if you have time and there's a chance you might make contact with a reader or a bookseller, I figure give it a go. Even if you only reach one person, they might be the one who starts the flood.

I attended this same author fair several years ago, and best I remember, I was pleased with the number of books I sold. Haven't had a chance to attend since then. But I confess, I consider it a good day if I sell ONE book even though that one sale doesn't pay the gas or motel bill.

RE: Book covers, my first two books were published by a small publisher that I'm no longer under contract to. At the time I was pleased with the covers even though they were a bit dark. The third in my series came out in July, same series, new publisher and a much lighter cover. I attended the Sturgis, KY book fair recently and I was amazed at how much more attention book #3 got than the other two at the book fair. It sold twice as many copies. The lighter cover really attracted attention, which made me happy that book #1 was just re-released with a much lighter cover. Who knew?

Good to know, Lonnie--my next cover is much lighter, as well!

How are the pre-holidays going for you?