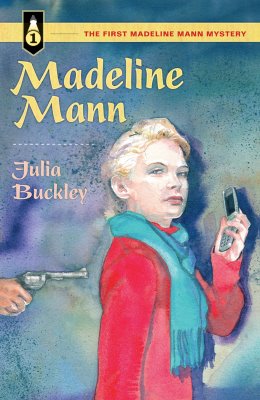 I wrote Madeline Mann back in 1994 or so. My son was a baby, and I was filling in my idle hours with some creative expression--my stab at a first mystery.
Now, more than twelve years later, Madeline has a face, thanks to U.K. artist Michael Frith and the great art department at Llewellyn Worldwide.
Maddy makes her print debut this summer, but her face will be visible long before that--starting here on the blog. Look for this lady in bookstores!
I'll post more about the book later on; it's a humorous mystery that takes place in Saugatuck, Michigan and the fictional Webley, Illinois. Madeline is a reporter, a woman who follows her vibes, and this makes her a natural for solving mysteries.
Let me know what you think of the Madeline art!
Posted by Julia Buckley at Monday, November 27, 2006

Yahoo! Great job. I can't wait. I write about Yoopers and you're writing about Trolls (that's what we call the Michiganders under the bridge).

Very nice! (You know, your email didn't have the pic in it. Made Sandra and I cry!)

When's our big PR trip to Madison? Then Deb can show us the ropes.

Yes, Michigan is very dear to my heart--so I had a murder committed there. :)

Madison is within running distance for me (if I was a sled dog). So you tell me when. I can get there any time.

Cool! Good luck with it!

Great cover, Julia. You must be delighted.

Thanks Pari and Lonnie. I guess the excitement hasn't worn off yet. Maybe if I get as far as ten books . . . ?

Julia, you are one clever lady. Your cover is Grrrrrreat! Congrats on breathing new life into Ms. Mann and her adventures.