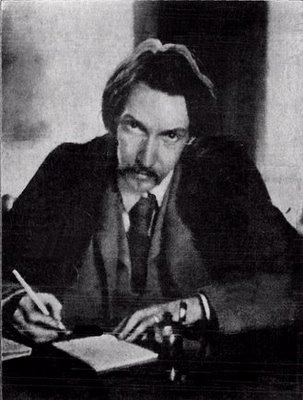 Robert Louis Stevenson celebrates a birthday today--he was born in 1850. I still marvel at the story of the creation of Dr. Jekyll and Mr. Hyde; the fact that Stevenson was awakened by his wife from a fever dream and then cross with her for waking him from "a fine bogey tale." He wrote half the story and read it to his wife and houseguests, then ran into his room to write more, still feverish and mumbling to himself.

I sometimes envy both the creative spark and the speed with which he wrote his tales, but RLS was, in fact, a man with a very short time to live, and I certainly don't envy him that, nor do I relish having a lifelong illness, as did this fine Scottish writer.

But any writer today would envy the fact that, 150 years later, his books are still on the shelves!

I still read Treasure Island and Kidnapped about once a year.