Julie Hyzy on Her Name, Her Catholic Upbringing and her Deadly Books 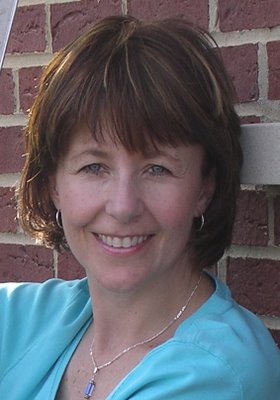 Hi, Julie! Since I put Neil Plakcy through this, I’ll make you do it, too: how do you pronounce “Hyzy?”
The best phonetic advice I can give is to think of the fruit drink Hi-C, but make it a Z instead. High-Zee. It’s a weird name, but I like the fact that people notice it.

Neil’s name is cool, too, isn’t it? Rhymes with Taxi. Clever… and people will remember that.

You and I will both be at the Midwest Literary Festival. You’ve done it before, I haven’t. What should I know? Can I bring my kids?
Actually, I attended as a spectator last year, and only for a few hours. My friend and writing partner, Michael A. Black and I were doing a signing that weekend at a library in Gurnee, and we decided to drop by the Midwest Literary Festival afterwards. Another friend, Debbie Brod (DC Brod) was scheduled for panels and readings and we went there to show support. I was very impressed with the event. It was very much like Printer’s Row—it had that same energy. I can’t wait to be part of it this year.

Last year it was hot, and there was limited shade. Folks tended to head to the nearby casino for some air-conditioned relief. Kids would probably enjoy being outside, visiting the booths and watching Mom, so I’d say sure, why not.

I was perusing your website, and I found a bunch of pictures of you shooting a gun (check her out, Lonnie Cruse!). You look pretty darn good. Should I be afraid of you? And what is that next to the Pepsi can? Is it a giant bullet?
Oh—I love to shoot. I don’t often get the chance to practice, and I don’t own a gun myself, but I was fortunate to attend Firearms & Fiction in Las Vegas (sponsored by the Second Amendment Foundation) and now I’m hooked.

At Firearms & Fiction (free to published authors who want to “get guns right”) I first learned gun safety (intense full day course) and the following day they took us to a gorgeous outdoor range near the mountains where we had the chance to try out all sorts of firearms.

I loaded and shot revolvers, semi-automatics, rifles, shotguns, and even a machine gun. What a rush! I felt like Rambo. -- By the way, guns really do smoke when they’re fired. I was amazed to discover that “smoking gun” wasn’t just poetic description.

The item next to the Pepsi can on my website is the shell casing from a 50 caliber Barrett Sniper rifle. The actual bullet pierced a target about 1000 feet away. This was one super-huge firearm… it had to be set on a tripod on a table, and we aimed through a high-powered scope, so hitting the target at that distance wasn’t really difficult.

There’s also a picture on the site of me standing, holding the rifle, but the thing was so heavy and so cumbersome that they placed the gun in my hands, quickly took the picture, and then stepped in to take the gun back. It’s a great shot of the firearm, but I look like I’m trying to play guitar.

You write short stories as well as novels. Do you find one format more challenging than the other?
I started out writing short stories—science-fiction, mostly. I thought I’d never have the stick-to-it-tive-ness to stay with a novel and I balked at the idea of attempting one. Michael Black, with whom I’d started to trade critiques, urged me to try. He told me I “was ready.” And, because I didn’t want to argue, I tried. Turned out to be so much fun, I can’t stop. There’s so much room in a novel to expand characters. I find novel writing to be a joyful thing.

Coming back to short stories, which I do between novels, is more of a challenge now that I’ve “spread out” in the longer format. With shorts, I’m constrained by word count to keep plots less intricate and characters less fleshed out. Still, it’s great exercise. My first short stories after completing a novel are usually over 10k words. As long as I keep working at it though, I’m able to bring them down around 5k to 7,500.

Tell us about Deadly Interest and Deadly Blessings, and how you came up with Alex St. James.
The working title for Deadly Blessings was Crowning Glory… there’s a holy quote to that effect and since Alex was balancing her priest story with a hair-care feature, I thought it apt. But it didn’t sound very menacing. So I decided to switch to a “deadly” theme.

Alex is a researcher for a Chicago television news program. I wanted to give her a job that would allow her some leeway into bad guys’ lives—-believably. I wanted to give her openings that allowed her to explore and get into trouble. She’s adopted, with Irish looks, a Polish (Szatjemski = St. James) surname, and an older sister who’s handicapped, because I wanted her basic issues to be a little bit different from the norm.

I plan to continue the story arc of her attempts to discover her biological roots. I think the adoption angle gives me a chance to throw her curveballs later in the series.

Speaking of curveballs, Mike Black and I tied the endings of our newest novels together—his A Final Judgment, and my Deadly Interest. We’re currently working on a collaboration where Ron Shade and Alex St. James team up to solve a mystery.

Now let’s hear about your thriller, Virtual Twilight. Great title! What makes this a thriller rather than a mystery?
I’m so glad you like the title. I do too. And I’m tickled to have written my first thriller. It was so much fun I can’t wait to do it again. Plus, I got to put some of my gun experiences to good use.

There’s a lot of discussion about what makes a thriller versus what makes mystery. And I know there’s overlap between the two. I can tell you that Virtual Twilight is bigger in scope than anything I’ve ever written. It’s third person—so the reader knows what the bad guys are up to even when the protagonist doesn’t—and my character is fighting to prevent major turmoil, versus solving a crime.

You are the Vice President of the Midwest Chapter of Mystery Writers of America. What sorts of things will you be doing in this role?
We have a fabulous chapter. While our membership is spread over a very wide swath of country, our Yahoo Board is effective in keeping us all in contact. It’s a great group. What I hope to do is to encourage attendance at our monthly meetings and to work at building our networking opportunities. We have some great guest speakers planned for this year—and we have meetings planned for Indianapolis, Minneapolis and Milwaukee—but my goal is to make the group tighter. Closer. Build camaraderie. We have an enormous pool of knowledge out there, and the more we get to know one another and share information the more we learn about one another and the more we all grow to be better writers.

You’re also a busy mom. How do you balance all of the work with cozy family time?
With my youngest in high school now, it’s gotten a little easier. I didn’t make writing a priority till about seven years ago, when the kids got to that almost-self-sufficient stage. There are still band competitions to attend, and school functions that I wouldn’t miss, but I make it a rule to write every single day. I started the “minimum two-page-a-day” writing rule on January 1, 2002 and haven’t missed a day yet.

You went to Catholic Schools and graduated from Loyola. Does this background ever creep into your fiction?
Oh, yeah.
Posted by Julia Buckley at Friday, September 01, 2006

I remember Julie well from the Love Is Murder conference when her novel won! She looked terrific accepting the prize. It was the year Walter Mosley was the keynote speaker, 2004, I think. Hope to meet up with you again sometime, Julie! Will you be at LIM in '07?

And I met Michael Black at the Firearms and Fiction Seminar in 2002. Great guy. And a GREAT seminar for authors. I highly recommend it. Ididn't shoot the "big gun" but my hubby did.

What a great interview, Julie! It was nice to learn more about you. I'll have to tell you my own Farrell's story when I see you at Bouchercon!

I really want to go to Firearms and Fiction... but I have this annoying teaching job that keeps me in the classroom when it's given. Maybe when I get a sabbatical someday.

Neil, when you go to firearms and fiction, I'll go, too.

Lonnie, you women with guns are really accumulating on the blog here. Just a little nervous . . .

Anonymous said...
This comment has been removed by a blog administrator.
4:50 PM

Wow! Thanks for singing Julie's praises, Michael. We might never have known of her excellence due to her modesty.

Hi- Wow. I didn't even know that comments were posted until Julia told me about them. Thanks for the kind words, Lonnie - I noticed you have a book coming out from Five Star soon, too. I hope we have a chance to chitchat about Five Star (I love them) at B'con or LiM (I'll be there) - and Neil - can't wait for the Farrell's story.
Thanks, Julia for the opportunity to be part of your blog. This is fun.