Leann Sweeney on Learning from Elizabeth George, Learning to Speak Like a Texan, and Learning to Write While Battling Illness. 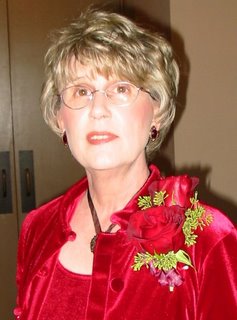 Your second book was called A Wedding to Die For, and we see you pictured here at your daughter’s wedding. Any connection there?
Big connection. Two weddings (my daughter, then my son) in two years might make you want to murder someone. At times. Most of it was fun, but my expression in this picture is directly related to the shoes from hell I was wearing. I sold them to some poor unsuspecting soul on E-bay as soon as I could. No one should have such objects of evil residing in their closet.

I think every woman who reads this will relate! You were born and raised in Niagara Falls and went to school in Syracuse, but now you live in Friendswood, Texas. Was it sort of a culture shock, going from New York to Texas? What’s the biggest difference you encountered?
When we moved to Texas I was a new mother, had no car and was pretty much trapped in a house with very little furniture and a screaming baby who never slept. Now there's some culture shock. If I called people on the phone it seemed like they were speaking a foreign language. And they couldn't understand me, either. One reason I started the Yellow Rose series is because I began collecting the Texas-isms I was hearing. Like, "That man's so skinny he might need worming." It was a whole new fascinating language and now I use the sayings I've collected. I also have a few books and a long article that appeared in the Houston Chronicle way back when that give me ideas for what my editor calls "Abbyisms." (Abby is my heroine). My editor is from NYC vs Chicago. It's a new language for her, too.

You spent “a small fortune on writing books.” Did these books help to perfect your writing skills?
Absolutely. The very best one, which I have not given away, is Techniques of the Selling Writer by Dwight Swain. I also have a worn and signed copy of The Writer's Journey by Christopher Volgler. But the investment that helped me the most was a 5 day intensive workshop taught by Elizabeth George. There were only 20 of us and we worked from dawn to dusk. She is an amazing teacher and I learned so much about writing.

To be honest, she is all business and we had no time to be in awe of her. We were working all the time and when we left class we had assignments to do. On the last day of class, a Sunday, she read aloud every scene all of had written for our WIP. I taped her critique of mine and treasure it because she said "You're ready ... go out and get published." Of course it took 6 years! LOL.

Why did you choose mystery as a genre?
I began reading mysteries when I was probably seven or eight. I have read outside the genre, because reading teaches you how to write, however mysteries, any kind, are what I love and now I read nothing else. It wasn't really a choice. I had to do it. Ruth Rendell and Elizabeth George are probably my all time favorites. Their ability to layer human emotion is inspiring to me as a writer.

You worked for many years in psychiatry. Do you think this helps in terms of creating a fictional character?
It's my belief that if I wrote about ordinary people doing ordinary things I would never have been published, nor would anyone else. An understanding of human motivation is essential to writing a mystery and I had firsthand experience in some very strange motivations. I try to write characters who are not "way out there" but who readers can recognize and relate to—dysfunctional people. Like that uncle who you only see at Thanksgiving because he's just too weird to be around more than once a year. And if you ever worked with psychiatric patients who are sick enough to be institutionalized, you have to have a sense of humor. I try to draw on some of those very funny and crazy encounters I've had.

Your detective, Abby Rose, debuted with the novel Pick Your Poison. How did you come up with Abby?
I have no idea how I came up with Abby. I think characters like her come from the deep subconscious part of my brain. I never wrote her bio or "talked" to her. I just knew her from the minute I wrote my first paragraph. Other characters are harder work to create and I do think a lot about their motivation. If I don't know what my characters want and what's stopping them from getting it, I can't make the story move forward. I guess that's my version of writer's block. It's all about the inner and outer conflicts characters face—-something I learned from E. George.

This is called your “Yellow Rose” mystery series, and naturally all the books are set in Texas. Do you think you’ll write any other series? Will you ever set one in New York?
I have an idea for another series, but I don't know if I can handle more than one. I have Lyme and the last few books have been tough to write since the disease affects concentration. I used to be able to write eight hours a day and now I'm lucky if I get four. BUT, I am getting treatment and after eight months, I am beginning to feel some changes. Keep you fingers crossed for me! I also have a stand alone book I started in 1998. I would love to one day finish it and get it published. (There are also three other books I wrote that will never see the light of day and thank God for that—two of them Abby Rose books).

I'm sorry to hear that. I hope the treatment works wonders for you.

Tell us about the upcoming book, Shoot From the Lip.
The fourth Yellow Rose Mystery will be out January 2. It's a long book for a traditional mystery at 92,000 words-which I head about from my editor! But, no cuts in the book were made because that's just how long it took to tell the story. I tackled reality TV with this one—a show similar, but not as nice as Extreme Home Makeover. As a mystery writer dealing with murder all the time, I wondered what would happen if perhaps those TV types found something unpleasant when they tore down a house.

Does your family help you sell your books?
Sure. Word of mouth is a wonderful thing for a writer. Pick Your Poison came out 4 days before my son's wedding and every copy in Sioux City, Iowa, where my daughter-in-law is from, was sold out. But after my husband's fellow workers read some of my stuff, they asked him how he slept at night lying next to someone who could cook up ways to kill people with things like cyanide.

What’s your favorite Texas food?
Fajitas. But barbecued brisket comes in a close second. When I went to visit my sister in Seattle, she'd had some of my brisket in Texas and asked me to make it. But all they had in the grocery store was this little piece of trimmed brisket like they use for corned beef. Here, you get the whole huge thing in shrink wrap for real barbecue. They weigh about 6-9 pounds! DELICIOUS when cooked with the right method.

You are a member of Texas Mystery Authors. Have you met some fun Texas writers here?
There are wonderful Texas writers. Rick Riordan (also a great writing teacher, btw) Jeff Abbott and Bill Crider all gave me wonderful blurbs for my first book, as did Carolyn Hart—though she's from Oklahoma. Susan McBride has become a good friend as she writes about Texas—though she no longer lives here. I could go on forever about all the fantastic writers I've had the privilege to meet on this journey.

How can readers find out more about Leann Sweeney and her Yellow Rose Mysteries?
I have a website—www.leannsweeney.com and a blog, but I am not much of a blogger so I envy you, Julia, for keeping this up and giving us writers an opportunity to talk about ourselves and our writing.

That's nice, thanks--and thanks for sharing, Leann!
Thank you!

Thanks. I enjoyed the interview. Will Howard

Thanks, Will! I enjoyed meeting Leann in cyberspace.

Vocations which are connected with the gaming business profoundly requires persistence and enthusiasm for the activity. There are the employments of games test, online overviews, and paid gaming surveys which can pay you a great deal. https://www.passivevoicedetector.com/5-best-things-about-passive-voice-fixer/

For the most part gamers love to eat snacks, for instance, drinks, fries, burgers and eating a great deal of lousy sustenance may in like manner realizes the real medicinal issues like obsession. Modest nourishment and soda pop can debilitate one's prosperity. www.plagerismchecker.org/how-to-master-paper-writing-in-6-simple-steps-with-copywrite-checker

Who can overlook this pong game which I played during my high schooler time? This was straightforward game and I constantly preferred it. I was utilized to play this game without moving from the love seat. I was incredibly dependent on this game. www.sentencechecker.info/sentence-punctuation-checker-will-revise-your-dots-and-commas

This blog is related to mystery and writers who write the such books and who they view the world and write in their novels or books. Reading this http://www.punctuationcheck.org/online-grammar-and-punctuation-checker-free-is-created-just-for-you/ article can solve your punctuation related errors. This blog is relate to women of a region and her educational process.

This blog is telling us the views of the one of the famous writer that how she thinks. Basically this site always give us the idea that how the writers thinks and this is a good thing for everyone especially for the person who want to become writer. You ought to read this post about the essay writing.